Your new objective is to find an alchemist going by the name of Anotine Lavoisier, as he is in dire need of your help. On this page of the Steelrising guide, you can find a walkthrough for The Shadows of Luxembourg Palace quest. During the quest, you'll face The Alchemist of Luxembourg.

This task requires you to have Momentum of Selenite, which is acquired during Troubled Waters quest. Moreover, don't forget to collect Antoine's Lavoisier Echoes.

During this mission, you'll encounter Prototypes and Couriers (more on them in page on Arachnids) You'll also encounter Lightning Rams (more about these automatons on the page on Rams). Another featured opponents are Trumpeters and Violinists (they are described in the Musicians page of the guide) Get ready to face Forgers and Lumberers (these giants are described under Labourers). During the mission, you will also encounter Ice Squires and Butchers (learn about them here: Cooks). You will also happen to meet a Stalker and a Pruner (these automatons are described in detail in Serpents). The roster goes on and features a Phoenix (for more information on this automaton see: Hunters), and finally Hoplites and Masters-at-Arms (these opponents are described in detail in Guards).

You will start the mission in a square. There are Prototypes and a Courier in the vicinity. 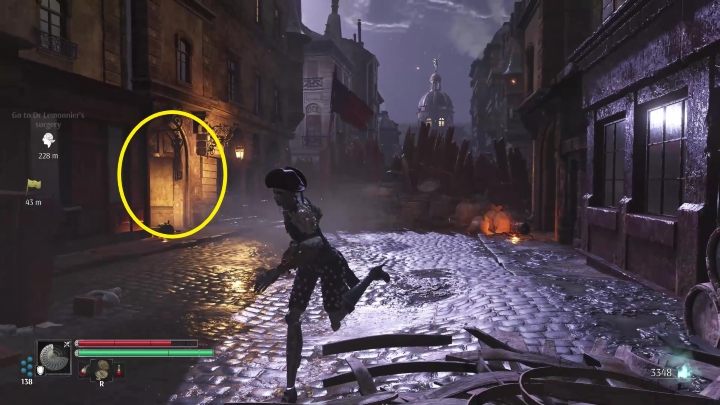 Once you reach the roadblock, turn into the tunnel on the left. You'll reach a square guarded by a Heavy Prototype. Keep moving forward.

When you leave the alley you will find yourself in front of a huge building. Near it you'll encounter a Courier, a Heavy Prototype, and a Lightning Ram.

Keep walking down the street, as at its end there is a Lightning Ram - you don't have to face him, as you should turn left before it. 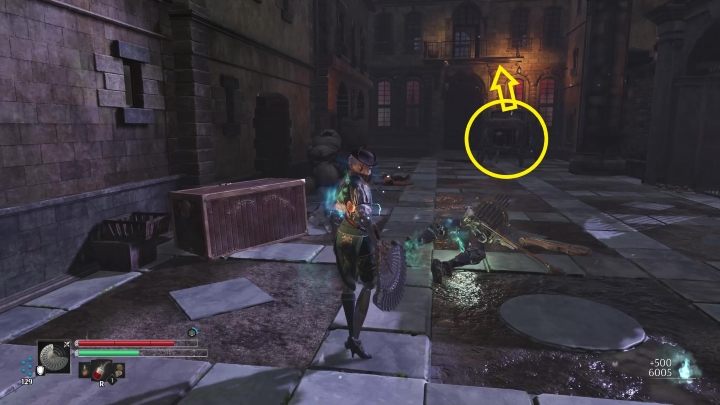 There is a Violinist in the alley you just entered. After dealing with him, jump onto the carriage and then onto the balcony. Now cross the room to reach the other side of the building.

You have to jump down. Be careful, however, as there is a Heavy Prototype, a Courier and a Lightning ram below. Follow the large tunnel to find a Vestal. Activate it.

Climb the stairs and go through the tunnel. You will reach a wide street. Go straight - enter the ruins by going under the double arch. Now turn right and follow the collapsed floor up. Watch out for Heavy Prototypes. 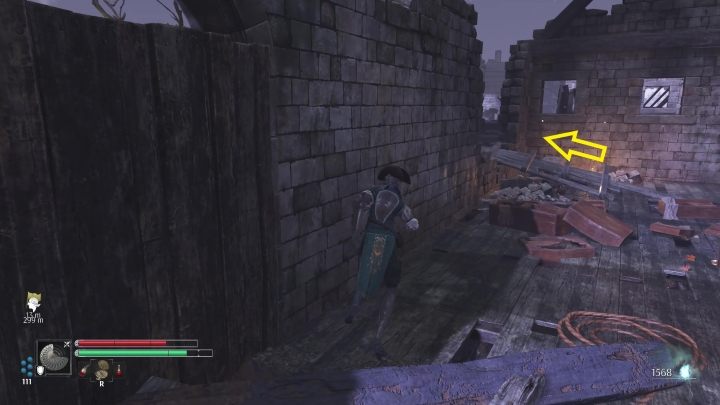 Jump into the square (follow the footbridge in the corner - we've marked it above) but watch out for a Forger and a Courier below.

Now walk along the path near the burning brazier. Go straight ahead to find another ruins. The pathway leads through another collapsed floor. Enter it. 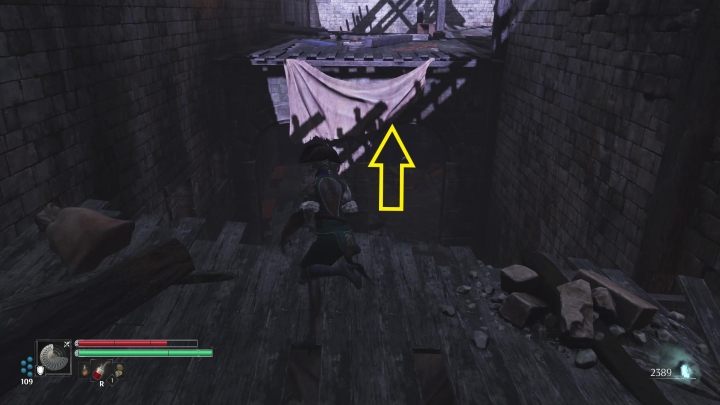 You have to jump over the chasm. For this purpose, use Momentum of Selenite. 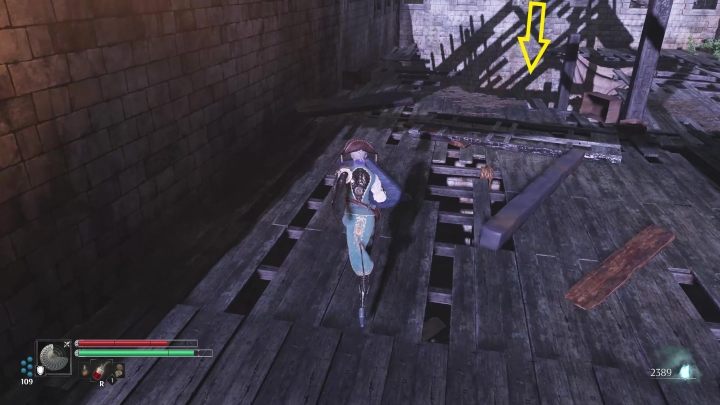 Now jump into the hole marked above. There are 2 Heavy Prototypes waiting for you downstairs. Exit the room. Be careful, because there is a Forger lurking around the corner. 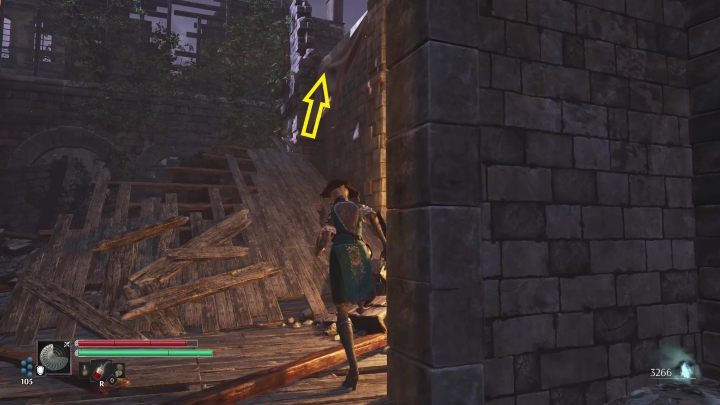 Head to a room with a burning brazier. Follow the board up, then climb up the wall (the climb area is marked with the canvas).

Jump to the adjacent building through the breach in the wall. Go down. There is a Courier and 2 Lumberers in the square. Watch out for them and try to get the arachnid first and then move onto the Labourers. These enemies are rather slow, so use ranged weapons or grenades if the situation demands it.

Enter the building. Go through it and climb up through the collapsed floor. Continue climbing. 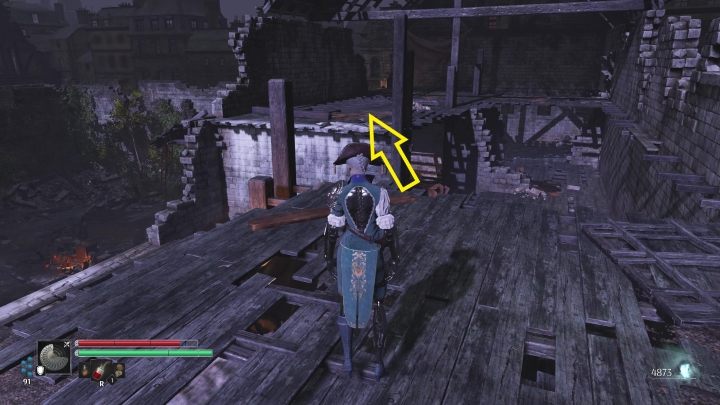 Now jump to the next piece of the floor. You can use Momentum of Selenite or climb through the crate under the wall and then pull yourself up. 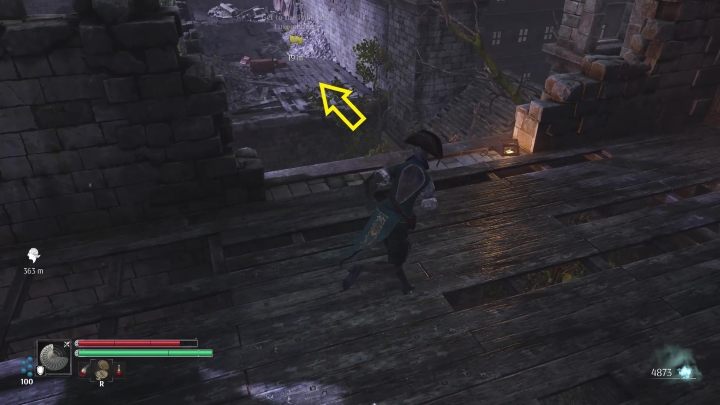 Once there, approach the breach in the wall and jump over to the other building. A beam protruding from the wall below can help you with this, as it will shorten the distance between buildings.

Go ahead and jump down to the street below. You can unlock the gate opposite it, activating a shortcut. . The path further leads right - to a pathway with a lit brazier. Go through the building. Keep following the road until you reach a square with a Vestal. Activate it.

Head now to the square with trees. Walk through it. There you will find a tunnel that will lead you to the next area.

You've reached the gardens. Your first opponent here will be a Violinist. Further along the way, you'll also encounter a Trumpeter. 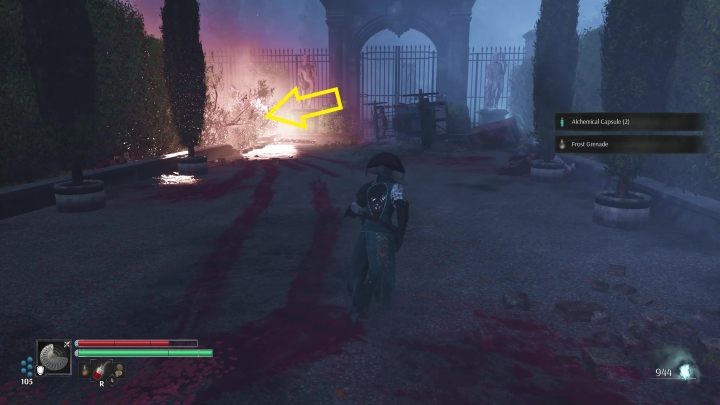 When you reach the burning fence, go through it. Climb the stairs. This is a place where you face a miniboss - Unstable Falcon. You can learn more about him on the dedicated page of our guide. 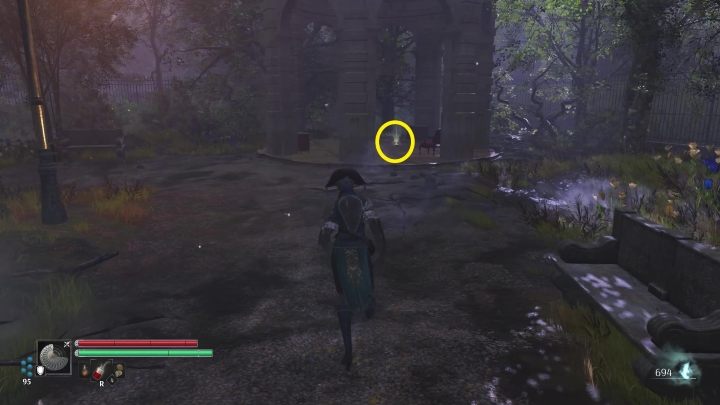 Once the opponent is gotten rid of, you can activate the Vestal. Follow the path further. Cross the bridge and continue forward until you see a small gazebo. Approach it - there is an Echo there.

Keep going. Cross another bridge. You'll come across a Prototype hiding in the bushes. The main path, on the other hand, is guarded by an Ice Squire accompanied by a Heavy Prototype.

Turn right. Go down the stairs and go straight. Follow the path. On the square, you will find a Violinist.

Continue to the next square, which holds a Ice Squire and a Courier. Go up the big stairs and follow the path until you reach a wide road. 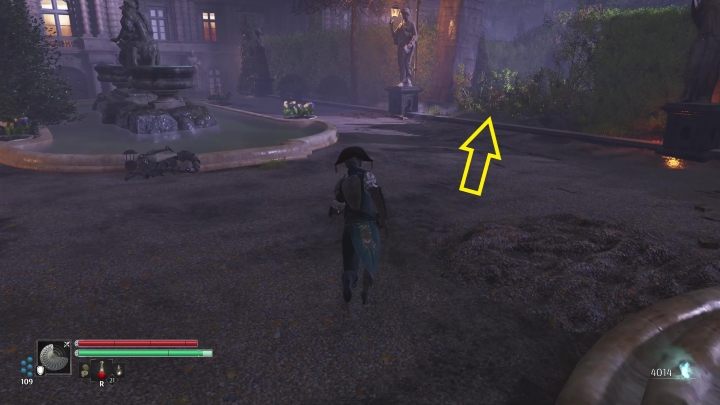 There is a Stalker and Gatherer next to the fountain. If you go to the end of the road and turn left, you can unlock a shortcut (there is a Phoenix at the gate). However, to continue the task, you will still have to cross the hedge before the turn, near the fountains.

There is an Ice Squire behind the bushes. Once you find yourself in a square, turn right. Go forward and deal with a Fiddler along the way. Continue going forward and turn left. Follow the path until you reach the square with a Vestal. Activate it. 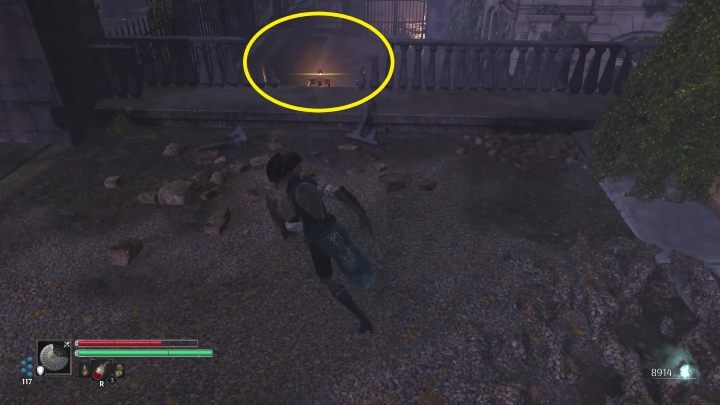 Cross the large square and keep to its left side. Opposite where the bodies are piled, there is a breach in the railings. Jump down,

Go along the path. At its end is the final Echo. Climb the stairs nearby and unlock the passage. You can now enter the garden. 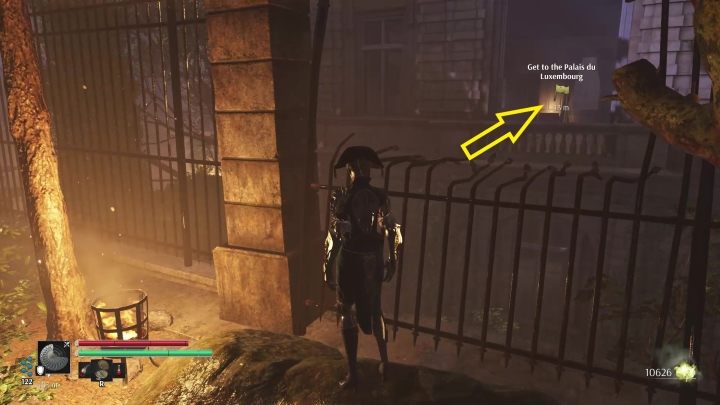 After passing through the gate, look at the metal fence in front of you. It has some bent bars. Jump on them and, using Momentum of Selenite , reach the adjacent balcony.

After approaching the window opposite the room, a cutscene will begin, after which you will face the The Alchemist of Luxembourg. Tips on the encounter and strategy can be found on a dedicated page of the guide.

After defeating the boss, talk to the alchemist and use up all dialogue options. The man will ask you to clear the way to the Cordelier Monastery. 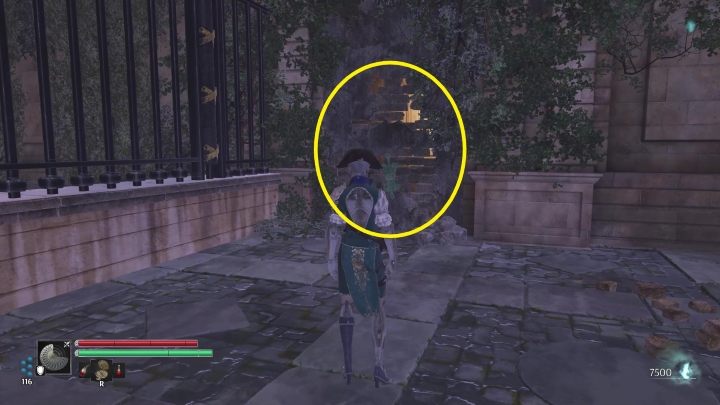 To get out of the boss arena, you need to smash the wall with the newly acquired The Alchemist's Ram. Enter the corridor, then climb the crates to reach the upper floor. Leave the room through the balcony and activate the Vestal.

Turn your back to the area from which you jumped off and follow the square right. Along the way you will encounter 2 Hoplites. At the end of the road, turn into the alley on the left. A Phoenix is met here.

Follow the alley on the right. You will reacha square with a well. The exit from the square is on the right. Time for a new encounter - a Master-at-Arms and a Courier. 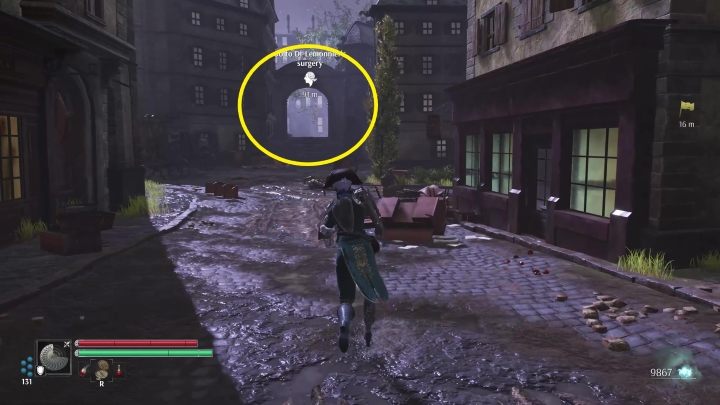 There are 2 possible ways forward. If you turn right, and go underneath the stone arch, you will be able to continue with a secondary quest. To learn more about the quest, check this page - In Memory of the Dauphin. 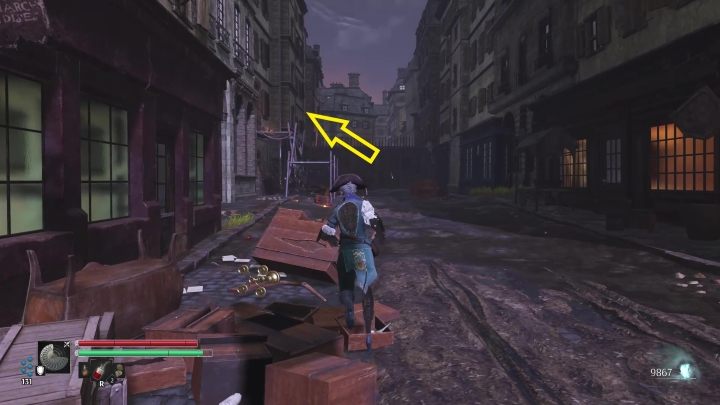 Nevertheless, to continue with the main quest, follow the street on the left. You have to climb the scaffolding to reach the room upstairs. Go through it and on the other side continue to climb up the platforms to the next balcony.

Next, jump to the next balcony using Momentum of Selenite and then repeat this maneuver. 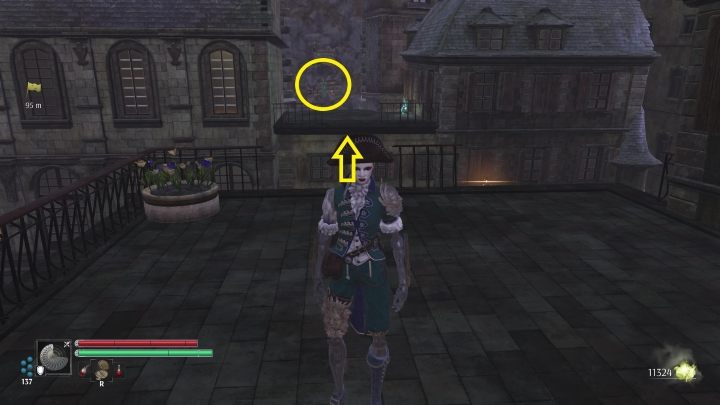 Walk to the other side of the balcony. Head to the adjacent platform using Momentum of Selenite , and then smash the wall marked above with The Alchemist's Ram. Get through the room and jump down to the street below. A Butcher and a Courier are encountered here. 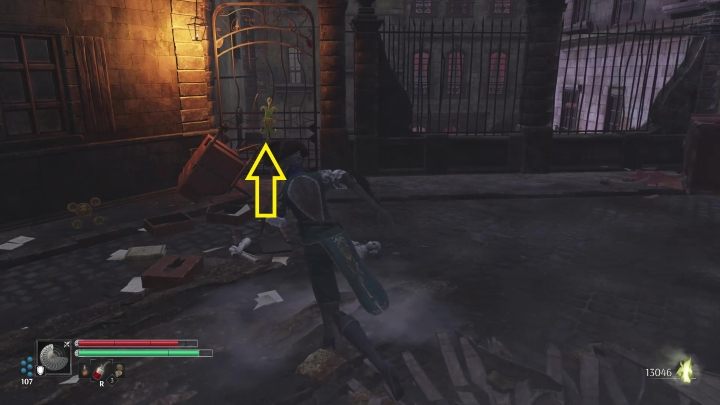 Follow the path. You can destroy the gate shown above, as it will activate a shortcut back to the Horseless Carriage. However, to continue the quest, turn right while in front of it. There is a Phoenix in the alley. 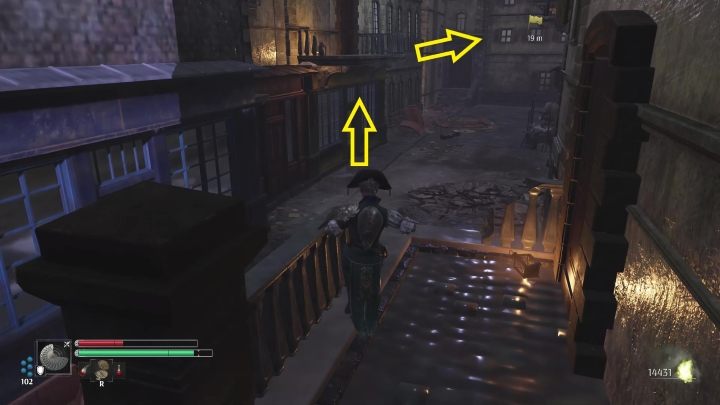 Climb the steps in front of the door. Get to the balcony by jumping and using Momentum of Selenite. Repeat to access another balcony. Get through the room. Jump down and destroy the wall on the left with The Alchemist's Ram (before that, you can unlock the gate on the right - it's a shortcut).

After destroying the wall on the left there is another shortcut to unlock, and on the right there are stairs that you must climb in order to continue. Open the gates of the building in front of you. A cutscene will begin. You've managed to complete the quest - you can now return to the carriage. Optionally, talk to Mirabeau some more to continue with the side quest - A Family Affair.