On this page of the guide to Steelrising, you will find the walkthrough for the Troubled Waters quest. In addition, we also write about the Titan The Selenite of the Louvre and the Unstable Statuary Ram. You will also learn where to find an upgrade to the Burette.

You will receive this task if you read the correspondence in the Horseless Carriage after completing The Master of the Machines quest.

Before the fight with the Titan, it is worth collecting the Echoes associated with Jean Sylvain Bailly. Their locations can be found on a separate page. This will allow you to free the scientist from his "coffin" and get a side quest.

You will start on the bridge. Go straight and climb the stairs. At the top, you will encounter one Heavy Prototype. Enter the hedge maze area. Head left - this is the only path available to you. Climb the stairs, at the top of which you will face a Pruner. 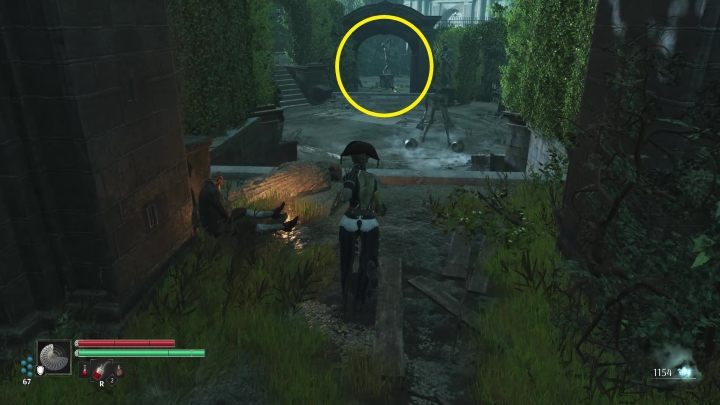 Go forward and through the arch indicated above. Be careful, though, because there is an Acolyte in the square. A Heavy Prototype is also patrolling the area.

In the square near the column marked above, you will find a Pruner. Turn left and climb the stairs. A Musketeer at the top. After defeating him, turn right and continue along the tiled road. You will be attacked by another Pruner.

When you reach the locked gate, turn left. There will be another Pruner. Climb the stairs. 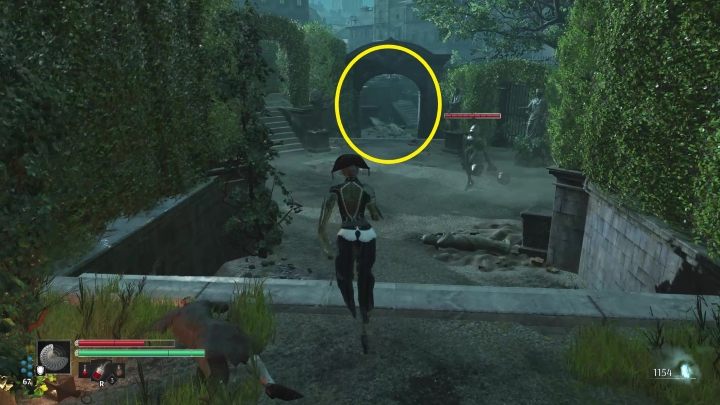 At the top of the stairs, turn right and go straight through the arch marked above. Watch out for an Acolyte. Go up another set of stairs and activate a Vestal. 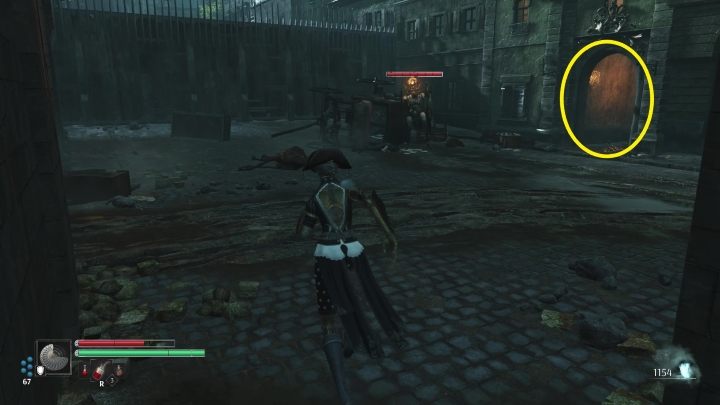 Go down the stairs. You will face a Hoplite. They are tough opponents, so attack them from behind. There is a passage near it. Use it. 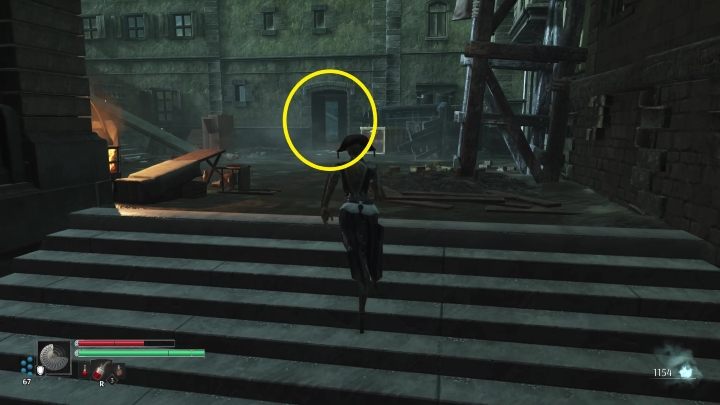 Go straight through the next passage. You will come across thee Light Jaguars. Now go through the stairs on the left. 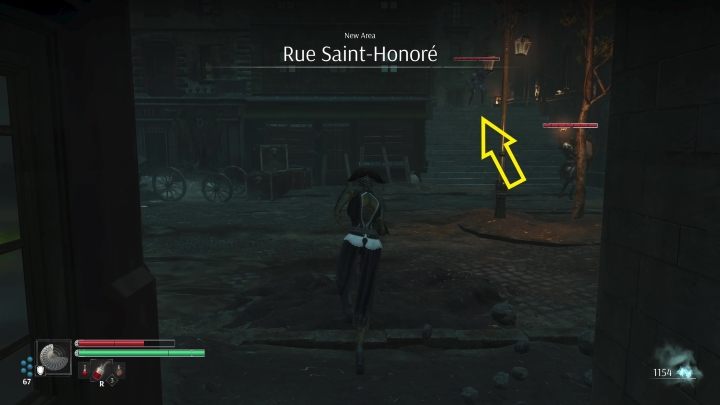 You will find yourself in a square, which is guarded by two Hoplites (they are far away from each other, so you are unlikely to face two at the same time). A Musketeer is at the top of the stairs. If you want to fight, we recommend dealing with him first. To proceed further you must climb the stairs where the Guard was standing and enter a small alley. 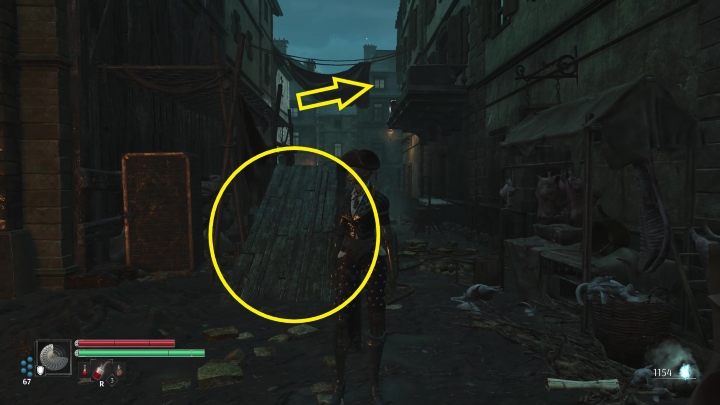 Walk on the footbridge, climb the scaffolding and jump to the balcony opposite. You will reach an apartment, which is a passage to the next square. 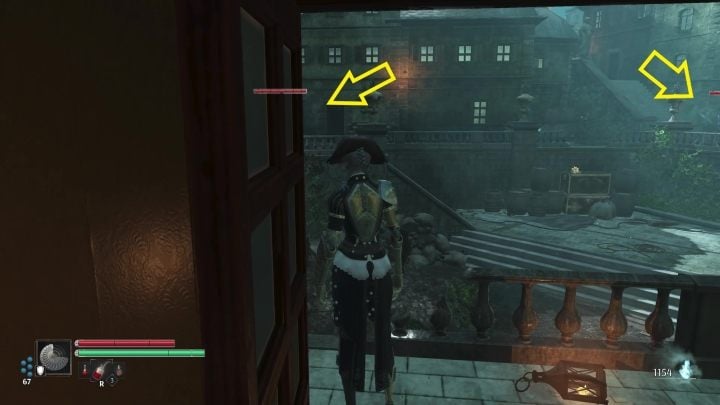 It is quite a dangerous place. At the top of the stairs, at the two ends of the square, there are Musketeers who will fire at you. The area at the bottom is patrolled by an Acolyte. It is best to start with opponents attacking from afar.

On the right side of the square, there are stairs behind the Musketeer. Next to them is a chest that contains a Burette upgrade. After emptying the chest, go upstairs where you will come across a Vestal.

You can also go to the Vestal first (so you won't risk losing your life), and then face the opponents in the square.

Climb the stairs to the building. There, talk to Mirabeau. The man will direct you to the Louvre.

However, before you leave him, read the letter on the table and then talk to him again. You will receive A Family Affair side quest. In addition, if you read the letter in Vaucanson's studio, you will be able to ask him about the dolphin.

Behind the scientist's house is a chest. The main task, however, directs you to the gate opposite the already activated Vestal. Now you can open it. 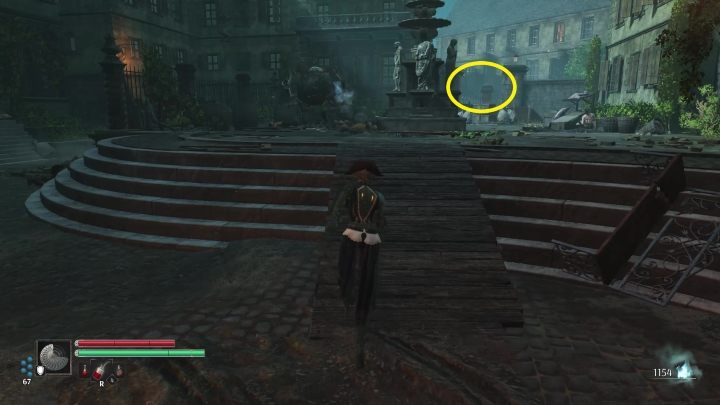 Continue heading straight. There will be one Heavy Prototype on the way. When you reach the barricade, turn left. You will come across an Ice Squire. Behind him, there is a breach in the wall - jump down through it. 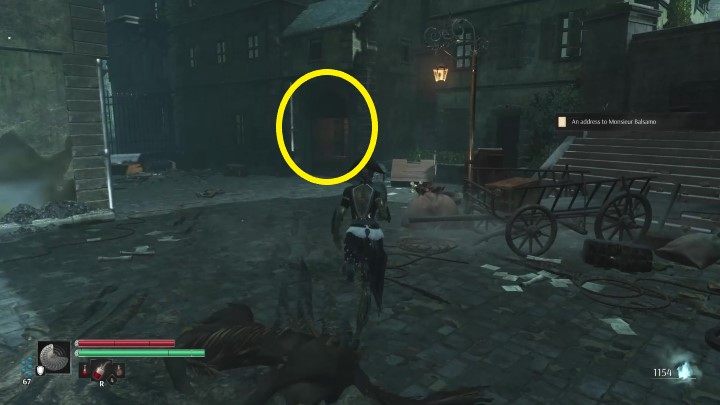 A passage is to the right of where you have landed. Enter it. Continue heading straight. You will encounter a Hoplite and a Heavy Prototype. When you reach the main street, turn left. 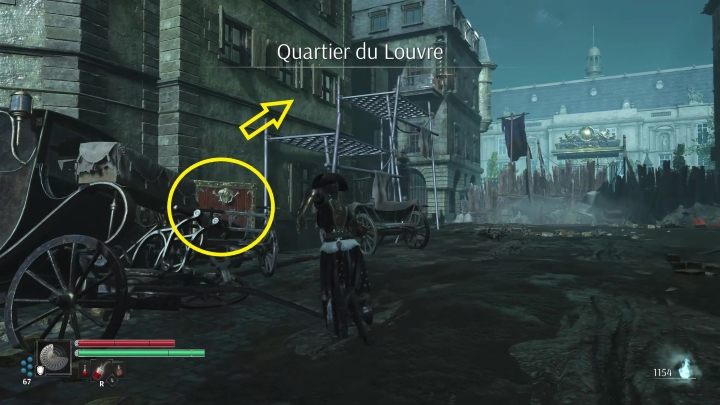 Continue heading straight. You will encounter a Falcon on the way. Go around it. You have to climb the crates, then climb up the platforms to the balcony. You will reach an apartment (there is one Echoe in the corner). Go through it and jump near the fence. 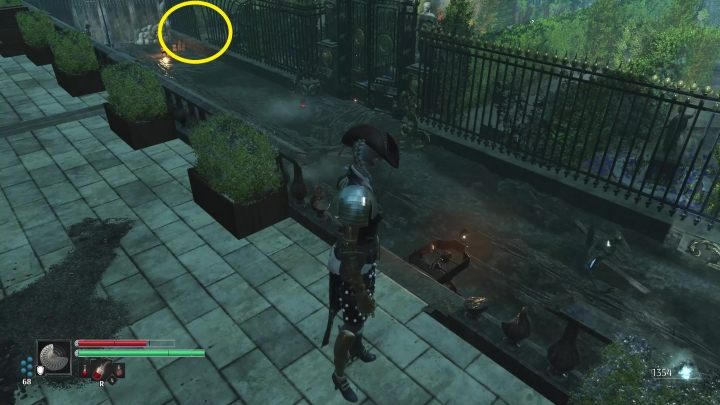 At the bottom is a Falcon and Light Jaguars. It is best to take care of the felines first. Go through the hole in the fence (marked above). You will come across a Trumpeter. Turn right and then left and activate a Vestal. 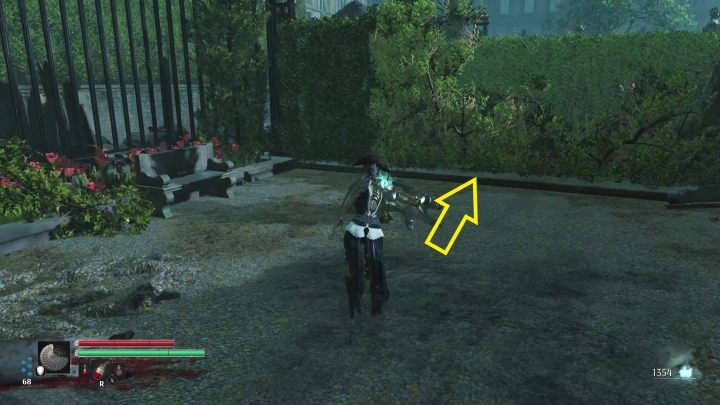 Go through the bushes. Follow the path until you reach the square guarded by an Acolyte. On the right is a Musketeer. 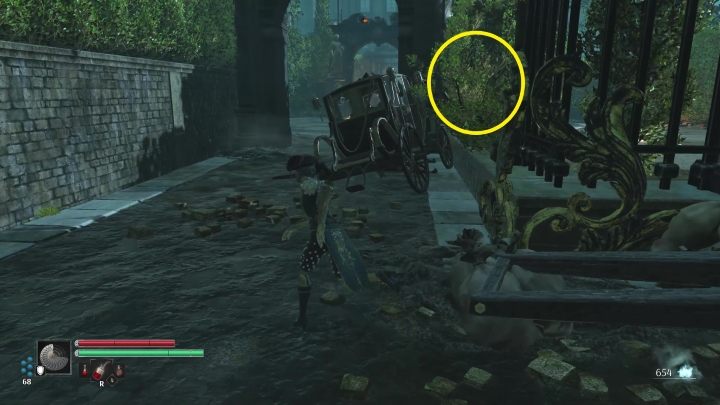 You can avoid them if you go into the bushes in front of the square. Behind them is a Trumpeter. For both paths, turn right and go straight. Then turn left. You will encounter a Trumpeter there.

Go straight until you reach a burning carriage. This square is quite large. It is guarded by an Ice Squire an Acolyte and a Musketeer (standing on the gallows). It is best to try to defeat them separately. 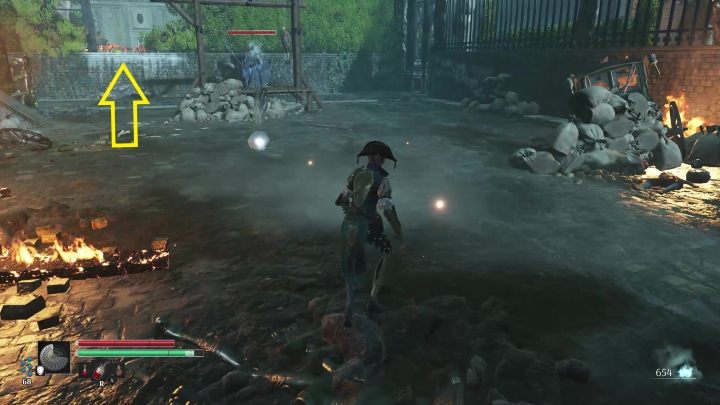 You must go through the wall - the hole is behind the gallows. You will end up in the garden. On the right side, between the roses, you will find Echoes.

Go straight and enter the Louvre. A mini-boss is on the first floor of the building. You can read more about it on a separate page: Unstable Statuary Ram. Attack him from behind. 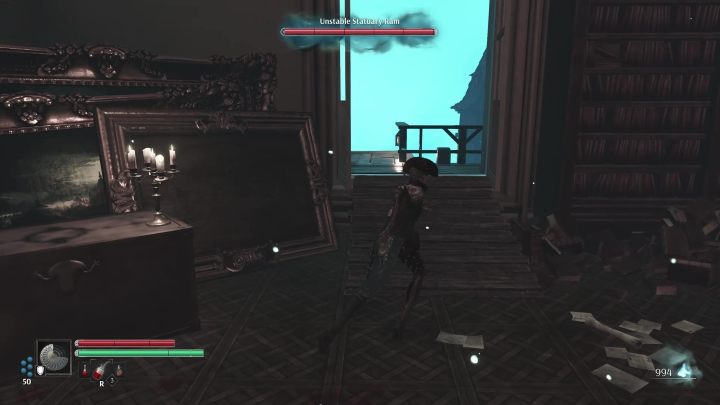 Head up the stairs to the top. The floor is guarded by two Trumpeters. At the end of the corridor, you will come across an open window (you can also exit through the door near the boss). Jump through it. In the courtyard, activate a Vestal.

From the courtyard, enter the museum's second wing. Go through the rooms with open doors (you will be attacked by a Light Jaguar).

Go up the stairs. Keep climbing until you reach the observatory.

Take the second exit and go down to the floor below. 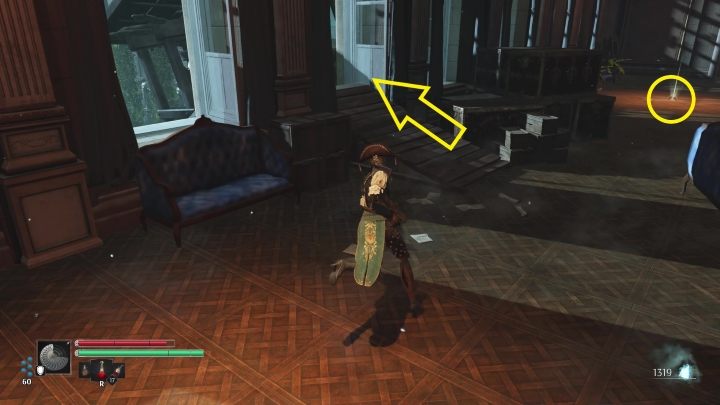 At the end of the corridor you will find an Echoe. Take it and jump out the window. Go straight ahead and unlock the shortcut to the Vestal. 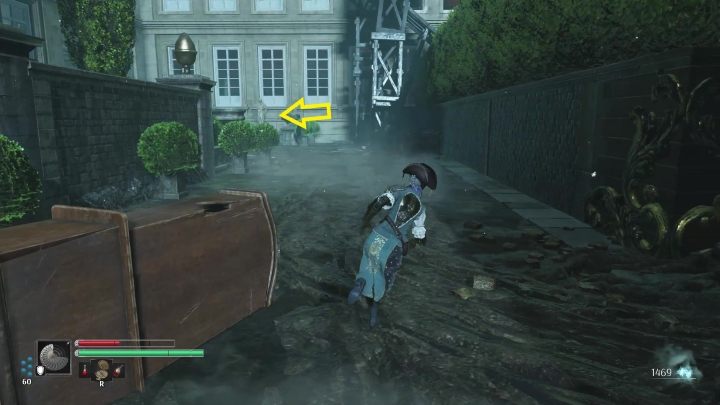 Now return to the unlocked area and follow the path to the left (looking from the Vestal), and then to the right. There is a passage to the rest of the palace - it is guarded by a Hoplite.

Go up the stairs, then descend the damaged floor.

A battle with Titan awaits you. We have discussed this boss in detail on a separate page of the guide - The Selenite of the Louvre Titan.

Defeating it will give you a new power - Selenite Momentum. 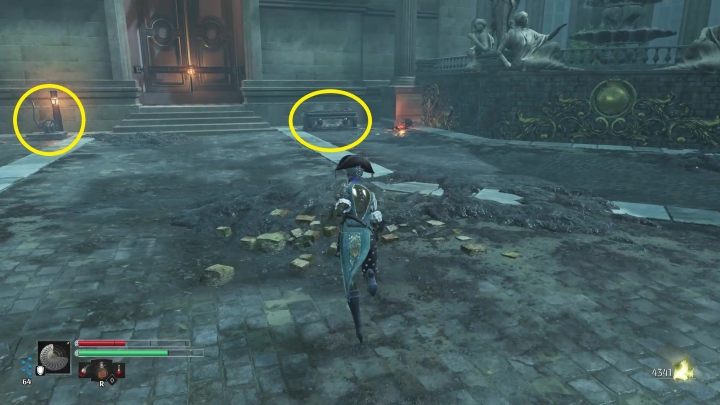 If you have collected all the Echoes related to Jean Sylvain Bailly, you will open his coffin and have a chat with the scholar. You will also get the side task Origins. You must now return to the Horseless Carriage. Selenite Momentum will be useful in reaching it.

If you have not collected all the Echoes, you will not be able to open the coffin. You will have to go to the Observatory again and open the chest inside. It is next to an open window. You passed by it earlier. You can always get the remaining collectibles and return to open the sarcophagus for an additional quest.

In both cases, open the door with the lever marked above. You will have a half-destroyed door in front of you. Stand on the rubble in front of the gate, jump up and use Selenite Momentum (dash) to get past it.