If you want to have a chance to fight stronger opponents, your character must also become stronger. The following page of the Steelrising guide will tell you all about character development. 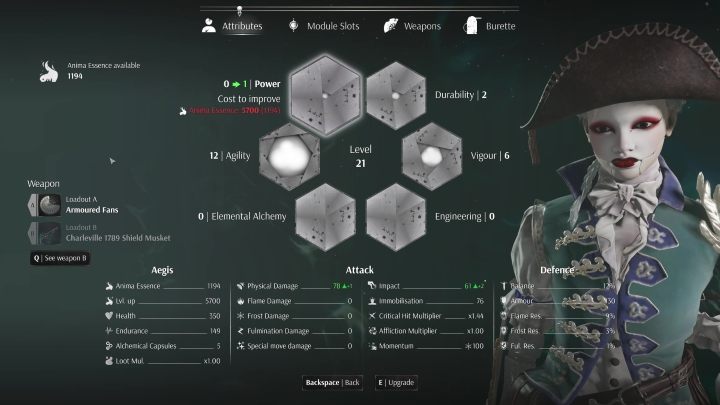 If you pay enough Anima essence, you will be able to upgrade your skills (up to a maximum of level 20). It is worth noting that each successive level costs more essence. However, the price depends on the overall level of the character, not on the attribute itself.

If you hover the cursor over the skill you want to increase, at the bottom you will see its direct effect on your statistics. You can read more about them on a separate page - Attributes and statistics.

Other ways to strengthen the character - equipment

The strength of the heroine is also significantly affected by the type and level of weapons you fight with. In addition, you can't forget about modules, as they also passively enhance the character. In addition, proper armor will also help Aegis last longer. You can read more about it on a separate page Equipment - upgrading and management.

After killing titans, you will receive special powers. They are mainly for moving around more freely and discovering new secrets. However, they also have use in combat. They also develop the heroine in some way.