The units in Steel Division 2 are the basic elements of the game. The victory in any skirmish will depend on the infantry, tanks, cannons or planes. Therefore, at least a basic knowledge about individual units is necessary to be successful.

There are 8 categories of units in the game:

Every type of troops has its own specific role on the battlefield, which will be described in each section of this chapter. In short, infantry and tanks occupy the terrain and take part in the direct fight against the enemy, recon is used to track enemies, support has numerous units to help other troops, and artillery will strike enemies from a long distance. Air Force can perform several tasks, from reconnaissance, air control, neutralizing tanks and vehicles to bombing enemy positions.

Each division has access to all categories, but the number and availability of types of units and equipment varies considerably.

It is also worth remembering a few details when browsing through statistics and unit information. Some planes or support units may have powerful missiles, which could suggest that they are suitable for heavy armored units. If such a unit does not have AP ammunition (anti-panzer ammo), it will usually not destroy the unit, but only damage or suppress it and lower the morale.

What is more, a large number of units have several types of ammunition, like tanks. If the ammunition is in the same window as the weapon, the statistics will have maximum values for all types of ammunition. For example, some tanks or cannons have special APCR ammunition that should pierce thicker armor than standard ammunition, but there are usually only several missiles of this type. That's why it's worth checking the statistics of regular AP ammunition (which you may have a lot of), because it will vary in range, penetration, etc. 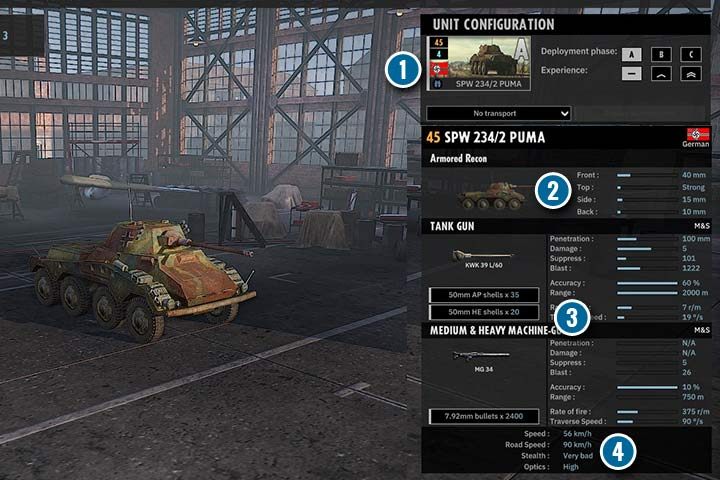 Puma is a great reconnaissance unit. It is not a cheap unit (1), but it can be in any phase and in large quantities. The biggest disadvantage of this vehicle is its weak armour, although for an armoured vehicle it is quite decent (2). Its biggest advantage is a strong gun with a long range and accuracy (3). The cannon is a recon vehicle and has very good optics, although it is difficult to hide it (4). Also, it is one of the fastest vehicles in the game, both in the field and on the road.

In the case of infantry, check their weapons. If a specific unit has machine guns, you will have to fight short distances and probably get defeated even by weaker units armed only with rifles, which can reach up to 500m. Remember that for infantry you can choose a transport type, and each division has a limited amount supplies and selection of trucks. Armed vehicles usually stay on the battlefield and can transport troops and support infantry. On the other hand, ordinary trucks disappear from the battlefield after the troops are unloaded. Some infantry units are equipped with regular and smoke grenades, TNTs, flamethrowers or armored weapons. The latter is extremely useful because it enables the destruction of vehicles. Otherwise, the infantry will be defenseless even in the fight against light tanks.