The dynamic front is a unique feature of Steel Division 2. This is a visual representation of the terrain that is under the control of your troops and is associated with several techniques. The front affects the control over the area and, consequently, determines which faction controls given strategic points. Capturing strategic points is an indicator of the victory of each game.

In the above situation the tank of red still cannot see the blue infantry. Therefore, the infantry can still spread the control zone on the left side, because there are no other enemies (1). Similarly the tank, it moves the front border on its side because it does not meet any resistance from the enemy (2).

The front moves from the lower/upper border of the map. Almost every unit in your army will automatically move the front. Most of the units have their own area of influence and move the front and increases the monitored area. This happens automatically - you do not need to perform any special action or order anything.

When the front line moves to the area with strategic points (symbol, flag), control over such a place comes automatically. The more points you control, the faster you achieve victory. It is necessary to leave at least 1-2 units at such points, especially if you are close to the enemy. Thus, you will not give back the territory you captured easily. 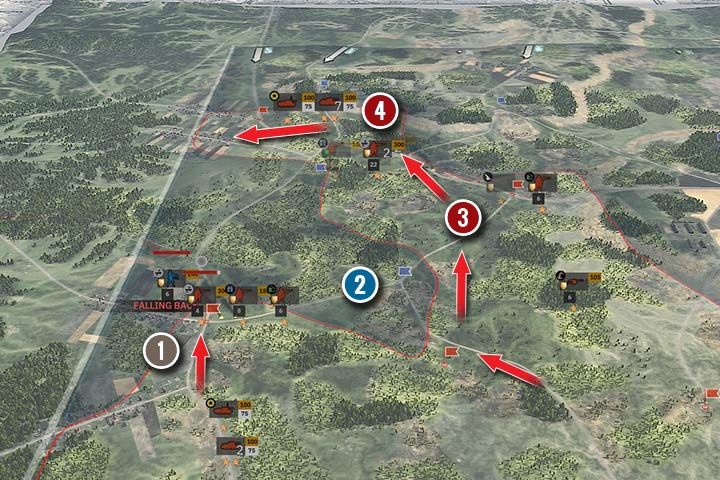 Circling the enemy is difficult to achieve, but if used properly, it will make it easier to deal with his troops. At the southern point there are still fights in progress (1) and the opponent still has troops at the next strategic point (2). However, red has bypassed the enemy's position and placed some troops on the west side (3). The tank and infantry spy broke the enemy's defense and cut off their supplies (4). Now it's time to finish the enemy and take over the remaining points.

The front also affects the morale of the troops. If your units are on enemy territory, or cut off from your territory (although the control zone still opens), then they will earn suppression points faster (reducing their efficiency) and become more likely to surrender to enemy units. Units outside their territory or cut off from supplies will not be able to get rid of suppression/morale points.

Thus, even the strongest enemy troops can be subjected to your artillery and massive attacks as they are captured (they cannot fight or move) and / or forced to surrender. The tactics of surrounding is extremely efficient, but often hard to execute. You can let the enemy go deep into your territory, only to cut him off from the supply lines and defeat in the cut-off area. This will require fast tanks and mechanized infantry, which in the shortest possible time can surround the enemy.