The guide to State of Mind contains tips to this interesting adventure game set in a near future - in Berlin and the mysterious City5. The walkthrough with numerous illustrations will help you complete the adventures of Richard Nolan and Adam Newman. Both men had a car accident, they both have a wife and a son, and they are journalists.

To make navigation easier, each of the chapters has been divided into subchapters that describe locations. All important items that should be added to your inventory are marked red, achievements are marked orange, and important information is bolded.

Richard Nolan tries to determine whereabouts of his wife and son who were supposed to visit the wife's family during the weekend. During his investigation, the man comes across information about a certain organization and a laboratory that deals with cybernetic implants. He also learns about Adam Newman - both men have more in common than Richard could thought.

The guide for State of Mind contains:

About State of Mind Game Guide 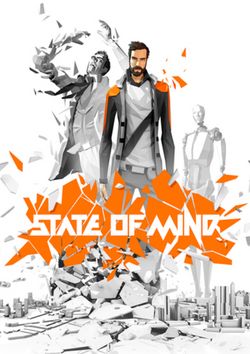 State of Mind for PS4, PC and etc. is an adventure game set in a dystopian world, created by Daedalic Entertainment  a developer popular mainly for The Whispered World, The Night of the Rabbit, Memoria, as well as both the Blackguards and Deponia series.

The game is set in Berlin, 2048. As perceived by the creators, the future does not bring any optimistic connotations to mind, for in the world of the game, humanity is being torn apart by constant wars, resources depleting and governments aimed at establishing their regimes. The situation is extremely bad, for humans have begun abandoning the physical world through digitalizing consciousness of every single one of them and settling in a utopian, virtual environment known as City 5.

State of Mind for PS4, PC and etc. tells a story of Richard Nolan, who decided to join the digital paradise, along with his wife and daughter. In case of the protagonist however, something went wrong when the transfer was being made, for only a part of his consciousness was successfully digitalized. As a result, there is a living body in Berlin, but only fragments of Nolan's personality remain within it. The player's task is to finish the data transfer and allow the protagonist to join his family. On their way however, the player will stumble on a conspirational plot that can change the course of history.

State of Mind is an adventure game based on a classic formula. The player explores the in-game locations, talks to other characters, gathers items and solves puzzles. The game offers a diversified set of riddles which require both utilizing different objects found during the game and completing mini-games, which challenge the players witts.

The player takes on the roles of several different characters  both those in Berlin and City 5. Actions taken in one reality affect the situation in the other.