The game guide Star Wars: The Old Republic contains everything that concerns all the eight classes from the very beginning till leaving the starting planet. There are four starting planets, each for two classes. That is why the guide is divided into four large parts.

Before each part there is the "Hints" chapter. It is common to all four parts. Here, you will find valuable hints concerning the gameplay. Getting acquainted with it is crucial for everyone who has started playing the game, and particularly for those who don't have any experience in playing MMO games.

Each of the four parts contains five chapters that describe: places, two classes and their main missions, side missions, and the location of datacrons. You can find more details below: 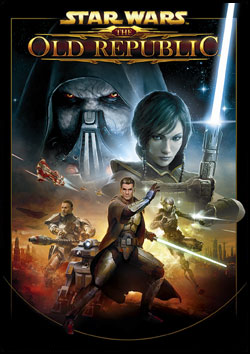 Play Star Wars: The Old Republic and be the hero of your own Star Wars saga in a story-driven massively-multiplayer online game from BioWare and LucasArts. Explore an age thousands of years before the rise of Darth Vader when war between the Galactic Republic and the Sith Empire divides the galaxy.

Choose to be a Jedi, a Sith, or from a variety of other classic Star Wars roles, and make decisions which define your personal story and determine your path down the light or dark side of the Force. Along the way you will befriend courageous companions who will fight at your side or possibly betray you based on your actions. Together, you will battle enemies in dynamic Star Wars combat and team up with other players to overcome incredible challenges.

It would seem that online RPGs are only created with multiplayer in mind. Guilds, raids, Teamspeak  these are the hallmarks of MMORPG. Fortunately, those who prefer an intimate adventure, still have plenty of games to chose from.