Interesting, but quite hard mission. You have to scan several containers scattered around the map - Millenium Falcon is your only ship here, while enemy has got strong fleet.. It doesn't matter which container you scan first - proper one will always be last.

Try to be stealthy right from the beginning. Zoom out your screen to see what's going around. Try to work out enemy movement schemes and get after containers when there's none around. Regardless of your skill, you will be finally detected. When that happens, begin to run like hell, using asteroid belts to get rid of larger enemy vessels. Destroy faster ones and scan containers while there's none around. If you get caught under heavy fire, use Falcon's special ability that makes you invulnerable for short period of time.

After scanning about half of the containers, Boba Fett will jump in. His ship is very fast and can spoil your plans, so when Boba gets close, lure him into asteroid belt and then defeat using your special ability. After that, there will be only few containers left, so you should be able to finish your task. 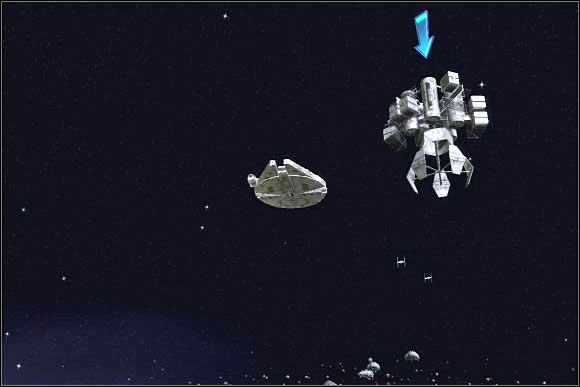 Corulag system becomes active - that's main objective of your next mission. Build a lot of assault frigates and Y-fighters first. Serious battles are going to happen now, so you need to be prepared.