If you know all about units and tactics, feel free to start Rebel campaign. It may be hard sometimes, so I strongly advise to finish more simple empire missions first. You should also consult both empire and rebel training sections.

Rebels are trying to steal X-wing blueprints, but they must first get rid of large imperial warships. Your mission is to sabotage shipyard in nearby Kuat system, so that warship will leave its position.

This first mission is very, very simple. You have some light ships at your disposal as well as captain Antilles and his Sundered Heart. To finish your task you have to blow up six almost unguarded constructions. Shoot in tanks near your targets, for they will start chain reaction. Shipyard security has only few Tartans and fighters - destroy them whenever they get in range with concentrated fire of all your ships. 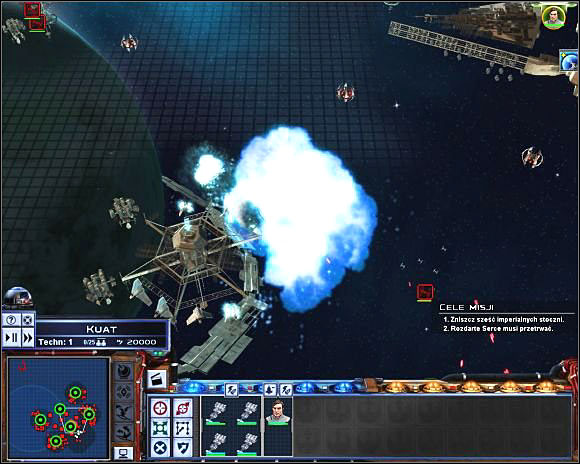 After finishing your starting mission, you will go to a galaxy map. As you can see, rebels control only small area right now. You will have to expand it fast, or else empire will crush you like a fly.

Although it may seem strange, Kuat system (that you just left) is almost defenseless. Send your fleet there right away and gather land army taking units from Alderaan and Yavin. In the meantime build up your space station on Dantooine and fill production queue with both ordinary soldiers and PLEX launchers - they are very cheap and you will need a lot of them in upcoming battles. Also build a mine on every planet. You will have to do this in every new system, because rebels can have really big problems with money in later game.

When heroes finish their chat, attack Kuat. Enemy has got only some stormtroopers and light vehicles here, so you should beat them without any problems. Just don't let enemy tanks to crush your troops and build turrets whenever possible.

After capturing Kuat you can upgrade all rebel planets - build level one space station, barracks and light factory in every system. Order your factories to train additional troops and vehicles as well as 1-2 Y-wing squadrons. Because C3PO and his little friend are invisible to enemy, send them to Corriban for some intelligence. As you can see, planet is very poorly defended: only one old frigate and some fighters in orbit. Once you have at least 6 platoons of soldiers and 6 platoons of PLEX launchers, attack. Space battle should be very simple. In land battle you must quickly capture crossroads at the center of the map, and then nearby support points. After that, crushing enemy base will be easy.