Very easy, but enjoyable mission. Gather your fleet around Death Star and attack Aldeeran. You have very large forces at your disposal. Starting units do not count towards your limit, so just after beginning of the battle bring in even more ships. This great army has only one task: to survive 75 seconds needed for Death Star to reach firing position. It is almost impossible to lose, although rebels have many heavy ships. When Death Star's valve (located on your panel) becomes active, pull it to annihilate Aldeeran and to win the battle. But I recommend to destroy at least some rebel cruisers and Ackbar's Base One flagship first. 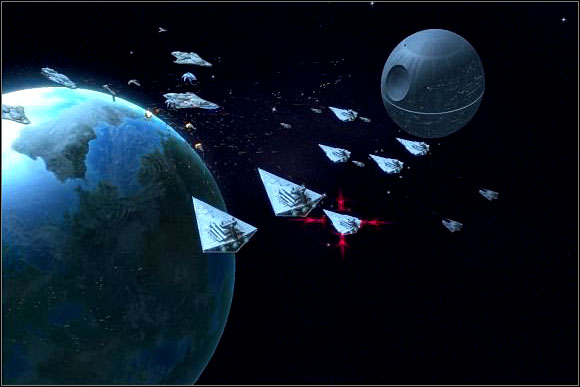 After destruction of Leia's homeworld, it is time to finish the Empire campaign. Last five planets become active - remnants of rebel forces are located there. You have to destroy them and then Palpatine will rule galaxy for few next millennia. There is nothing to improve or to conquer. Although there could be some rebel sneak attacks, you can ignore them. It won't matter if you lose planet or two, because you are about to win the game.