Moff Calast has betrayed his emperor and deserves to die! There is one problem though - Calast commands powerful Imperial class destroyer, which outguns every single ship in your fleet. Since you don't have any other options, build up large fleet and go after him to Atzeri. 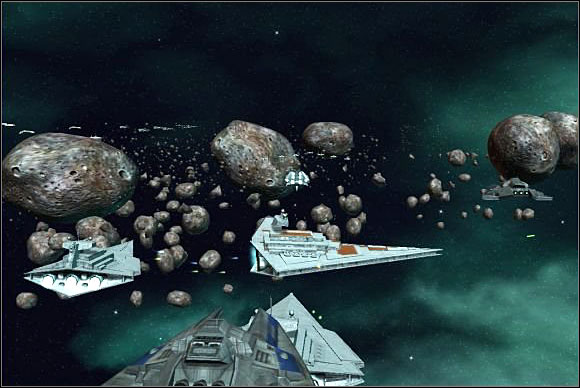 When battle begins, Calast's ship will be near your fleet. It will jump away though before you can deal some serious damage. You have two options now - terminate mission or fight on with rebel forces. I strongly recommend second choice, as you will have to defeat Atzeri anyway.

This battle won't be very different from those you fought before, although between you and enemy base there is a broad asteroid belt. Enemy Marauders fire from behind it. You can go around asteroids, but it is going to take some time. So I suggest you to charge through the rocks and attack enemy cruisers and base right on. Some ships will be damaged, but that shouldn't be very troubling. Soon you'll blow apart the base and Atzeri is almost yours.

That doesn't solve main problem though, as Calast is still free. Fortunately, emperor will send Interdictor cruiser to help you in next ambush. It prevents enemy ships from jumping into hyperspace, so immediately join it with your army, and then wait. Soon Calast will show himself around one of the planets. Go there immediately.

It is hard to say something about this battle, because Calast shows at random planets. However, you should stop the time at very beginning, and then divide your fleet into several groups. Order Interdictor to fly behind your forces. After turning on gravitation field, it will be totally immobile, so it should be as far from the enemy, as it is possible.

Unfortunately, you have only few seconds to move your cruiser, because soon after spotting your ships, Calast will jump out of the system. If that happens, reload your game and try to turn on the field a little faster. When the field is on, traitor will go after Interdictor. Leave small escort near your cruiser, and then send rest of the fleet to intercept enemy ship before it gets close enough to shoot. Target engines first, and then take out shield generator. Ignore other rebel Ships. When you manage to deal enough damage and keep Interdictor alive, mission will be over.

If you have lost any planet due to Calast mutiny, time to take it back. Also, be sure to have largest stations on Sulust, Fondor, Kuat, and Mon Calamari. Soon you will be able to build Imperial class ships there.... But first, emperor wants to punish treacherous Bothans.