Next task appears to be simple - you need to control Mon Calamari orbit. After recent battles you should know how to utilize Victory destroyers and Broadside cruisers. At least I hope so, because this mission will be hard, especially if you play it for the first time.

When fleet appears on the screen, stop the game and divide your forces into groups. It is especially important to put all the bombers in one squad and to get them to safest possible position - you won't be able to finish this missions without LOTS of Tie-bombers. After that, begin to move your fleet to the lower-right corner of the map. Some rebel ships and Marauder cruisers will strike you on the way, so deal with them fast, but do not get to close to the enemy base.

When in lower-right corner, assemble your battle-lines and then assault the base. All bombers should stay in asteroid field with 1-2 Tartans for protection. Let Broadsides bomb enemy station from maximal range. Battle near the station will be hard. Rebels have a lot of sips, and base itself is very tough. Protect your Tartans and immediately bring reinforcements if one of your ships is destroyed. When new destroyer joins the battle, remember to send away his bombers. Try not to lose fleet commanders - if your flagship gets badly damaged, get him behind your lines. 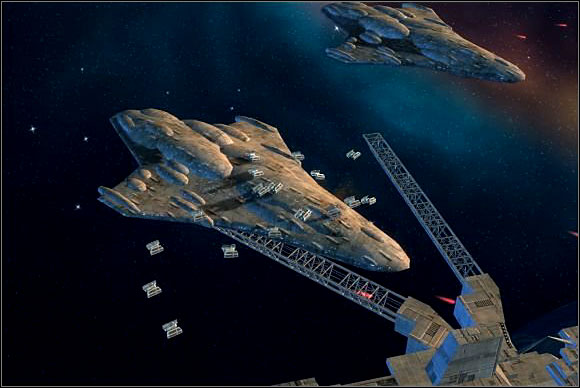 Mon Calamari cruisers are even tougher than Imperial-class destroyers.

In the midst of this battle, two Mon Calamari cruisers will jump in to the system. These powerful ships can blow up star destroyer in a matter of seconds. Don't worry though. Continue your battle near the base and send all your bombers to deal with enemy dreadnoughts. Shoot them with Broadsides too, if you have any left. One cruiser should be destroyed, before getting to your positions. Other one will probably survive long enough to scrap few of your ships, but you probably have still some destroyers in reinforcement queue, so that won't matter much.

This time there is little do be done. Take over any remaining planets, and build most important structures on Mon Calamari. Remember to upgrade stations near Calamari and Kuat. You will need them to construct largest Imperial ships, when they become available.