Just after landing, take over two nearby construction points. You should build anti-infantry turret on the first one, and healing station on the second. In first wave drop Vader, stormtroopers and one TIE Mauler platoon. 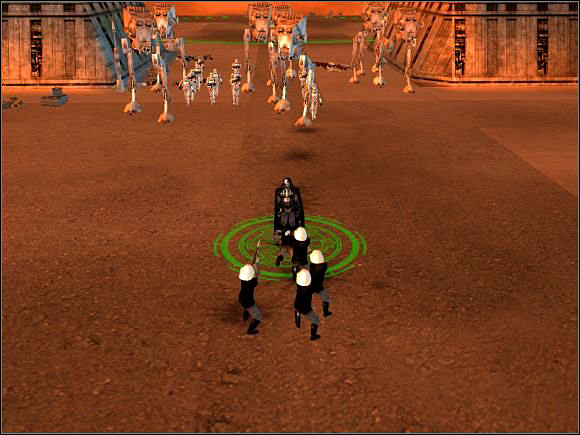 To minimize casualties it is good to have Vader in front of your army. Rebels are no match for him.

There are few tall, metallic buildings scattered across the battlefield. They spawn groups of local infantry at fast rate. There is also Rebel base behind the wall north of your starting position. This mission is not very tough, but it requires aggressive gameplay. Steel "skyscrapers" and Rebel base will continue to produce enemy units until you destroy them. If you get stuck somewhere and go into defense, they will slowly overwhelm you.

Be quick. Just after landing send Vader and stormtroopers west (keep AT-ST walkers behind - many rebels are armed with PLEX Launchers). If you haven't done that during first mission, assign "take cover" order of your stormtroopers to one accessible key. Turn this ability on every time your men take fire - it will reduce casualties. Also, remember about few important rules:

1) Always have all available forces on battlefield - when one unit dies, immediately drop new one from the orbit.

2) Never leave support points without defense or enemy will recapture them almost instantly. One or two infantry groups are usually enough - at least they will buy you time to send some reinforcements.

3) Use airstrikes! Every time large enemy group appears, request bomber support. You will save a lot of time and units. If enemy is moving, be sure to place airstrike marker ahead of him. It will take few seconds, before bombing fly in.

4) When airstrikes are not available, use your TIE Maulers to crush infantry. Badly damaged tanks can be self-destructed near enemy groups.

5) Capture and utilize every construction point. If you leave them behind, some rebel scouts may appear out of nowhere, just to build handful of turrets behind your back.

Remember those rules and advance fast to disable all enemy buildings. After capturing second support point, attack enemy base. It isn't heavily defended, but buildings can spawn troops fast, so use airstrikes to bring them down.

Build important structures on Fondor and then, according to the orders, send spybot to Illum system. Build up your army in the meantime. Be sure to buy fleet and field commanders, as they will make battles easier and will give your units considerable health bonus. Other planets are still unavailable, so after a while you can send Boba with your fleet to start another task.