The guide to Starcraft II: Legacy of the Void most of all contains a very detailed walkthrough for the game. You will learn from it how to easily complete each mission and complete side objectives. The "Achievements" chapter contains advices related to obtaining all achievements in specific missions. The guide was created based on the premiere edition of the game completed on normal difficulty level. It was created mostly for players who have basic knowledge of real time strategy games, but veterans should be satisfied with it as well. In achievement chapters, the challenges that require you to previously complete the campaign are listed at the end.

The guide to Starcraft II: Legacy of the Void contains:

In the chapter focusing on the achievements, the ones that require you to previously complete the game are always listed at the end. The game allows you to select units used during campaign missions. To make the guide more clear, only one name will be used, the default one (first of three versions of a specific unit). For example, if the zealot name will appear in the text, it can be related both to the zealot unit, and its other versions - centurion and sentinel. If completing a mission or obtaining an achievement will require you to create a specific version of the unit, like for example the mothership, it will be marked in the guide or the description will inform you about it. In other situations, you will either have a freedom to choose, or the game will force you to use unit types that are selected for you automatically.

About StarCraft II: Legacy of the Void Game Guide 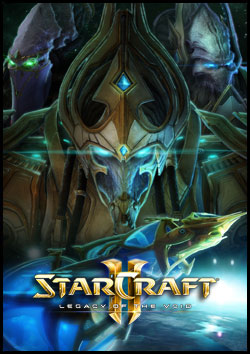 Legacy of the Void is the third part in the trilogy of StarCraft II. The player assumes the role of the commander of the powerful and technologically advanced Protoss, who have a very mysterious past. StarCraft II in many respects resembles the original, because it did not change the essence of gameplay mechanics.

Protoss race really changed its fighting style. Their military has become much more mobile thanks to a completely new technology provided by the improved pylons. They allow you to teleport units as far as they can reach. Some representatives of this race also received an individual ability to teleport (Stalker). Movement speed of many other units was also increased (e.g. Zealots and Colossus).

One of the most notable features of the latest game is, of course, a completely new graphic design. The game utilizes the great capabilities of the new graphics engine, which is able to generate a large amount of three-dimensional and highly detailed units engaged in combat on great-looking maps. T

More About StarCraft II: Legacy of the Void

This year's E3 proved to be exceptionally rich in more than just console games announcements. It's been some time since personal computers made their presence felt on the market in such a noticeable manner.

StarCraft II: Legacy of the Void Game Guide is also available in our Mobile App