On this page of our guide to Star Wars Jedi: Fallen Order we have prepared a detailed walkthrough of the final mission in the game - attack on the Fortress Inquisitorius. After reaching the fortress, Cal will initially have to break through groups of Stormtroopers and droids. The most important moments of the game's finale are - duel with Trilla / Second Sister and confrontation with Darth Vader.

Preparations for the campaign's finale 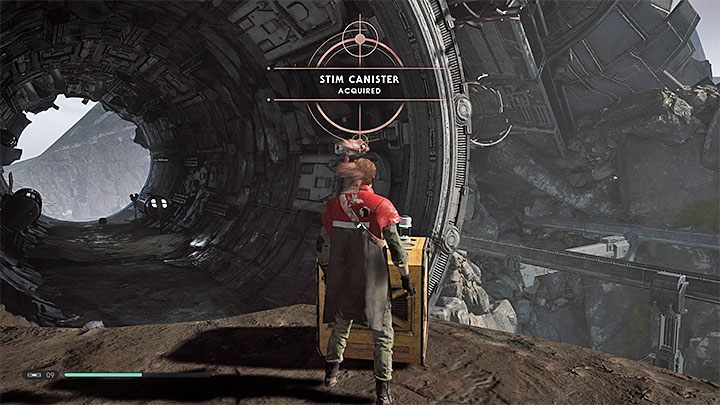 It's worth getting ready before you set off for the final location, as you won't be able to leave it until you've defeated the final boss and experienced an extra confrontation with Darth Vader. Try to find as many stim canisters (preferably all of them) on other planets as possible in order to have more BD-1 treatments available at your disposal. Don't worry if you haven't found all the secrets, because the game can be continued after the main plot has been completed. 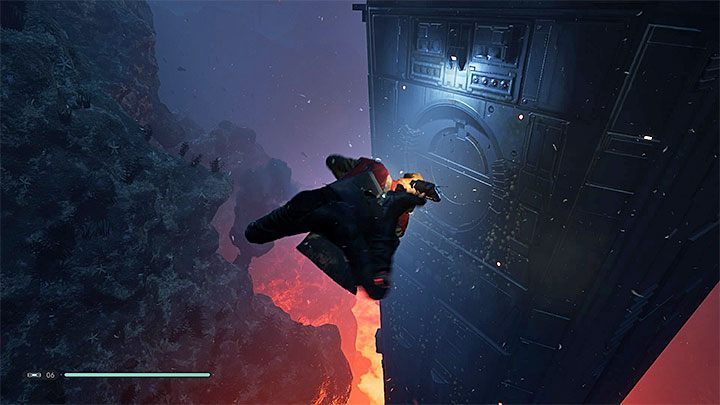 Open a map of the galaxy and select a planet called Nur. After watching a cutscene, you will find yourself underwater. You have to head towards the lock shown in the screenshot. It opens automatically and you will be able to swim inside. Right next to it there is a place where you can get out of the water.

Journey to the interrogation room 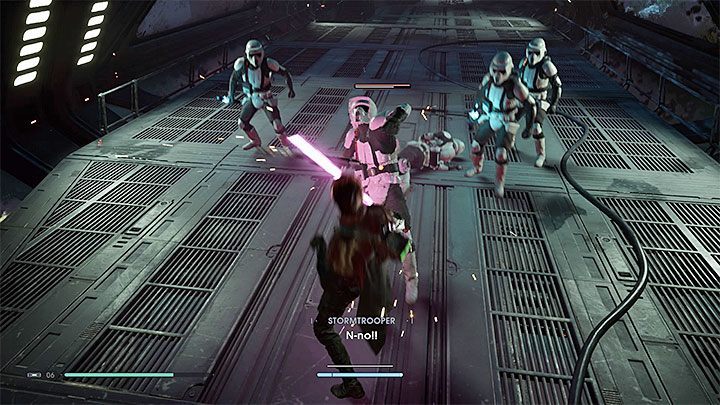 You'll meet first Stormtroopers as soon as you get out of the water. Deal with them and reach the door that can be opened with the help of BD-1.

After you have opened the door, start by getting rid of the droid and then take an interest in more distant enemies. From this point on, you will have to deal with the problem of regular spawns of reinforcements. New enemies can join the battle after you get rid of all or most of your opponents in the current group. In case of this battle, the last enemy group will include a Purge Trooper. While fighting, don't forget the Split Saber attack, which will allow you to kill enemies quickly. Also try to avoid frequent injuries, as the meditation points in the fortress are quite clearly separated from each other. 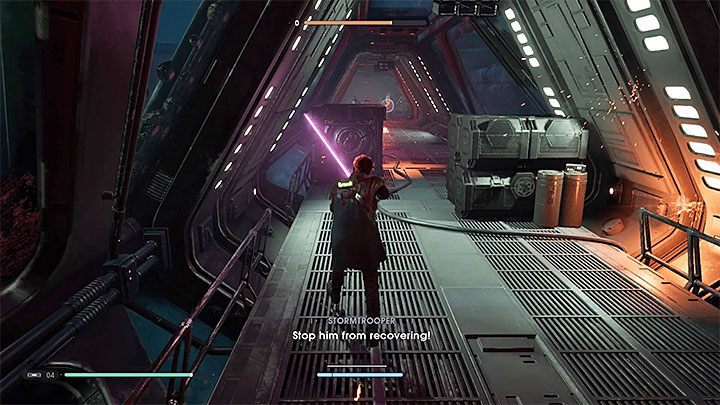 Follow the narrow corridor and eliminate more Stormtroopers. You don't have to worry about enemies at the end of the corridor, because the passage will close when you get close enough to it. Run with the block button held down to avoid getting hit by enemies that use heavy blasters.

Expect to encounter a new Purge Trooper. Turn left where there is a large control room. Start by eliminating the enemy with the blaster and destroy the droid at the end of the battle. 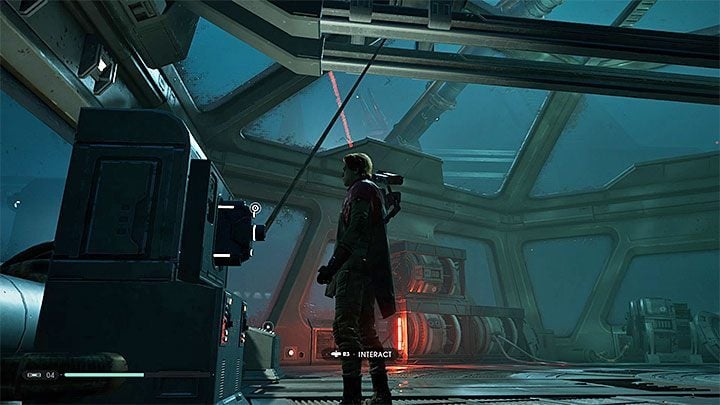 After the battles, try using the central console. You will find out that you have to restore power supplies. There is a hanging contact in the room, but it is initially located too far away to be plugged in. Use the Force Push on the structure at the ceiling to push it on rails towards the console. Only then grab the cable and connect the device to the power supply (as in the screenshot above). 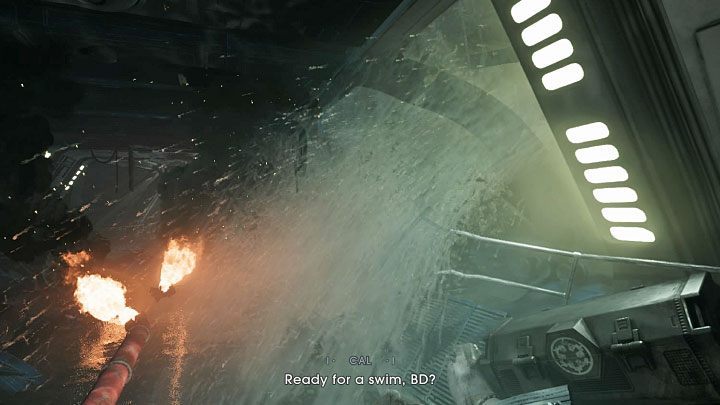 Watch the explosion and return to the previous corridor. Proceed to the passage that got shut earlier. It will be partially destroyed, but you can squeeze through to the other side. Use the Force on the damaged right side of the hallway to flood the entire area.

There's no need to rush it during the underwater sequence as Cal cannot run out of oxygen. Move through the flooded sections until you reach a place where you can get out of the water. In a small round room you will find a meditation point. 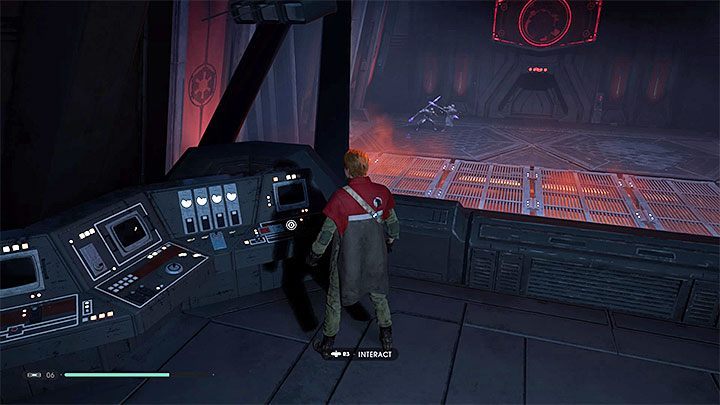 In a new room, it's a good idea to start by running upstairs to deal with opponents who use blasters. They will not interfere with the battles on the ground floor. Deal with the Stormtroopers and take an interest in the console upstairs. By using it you will dislocate some platforms in the adjacent room. This will make it easier to throw enemies into the abyss by using the Force Push ability.

The entrance to the great hall is on the ground floor. Get rid of two Purge Troopers. It is worth to kill them just by pushing them into the abyss (activate the Force Push ability several times if necessary). 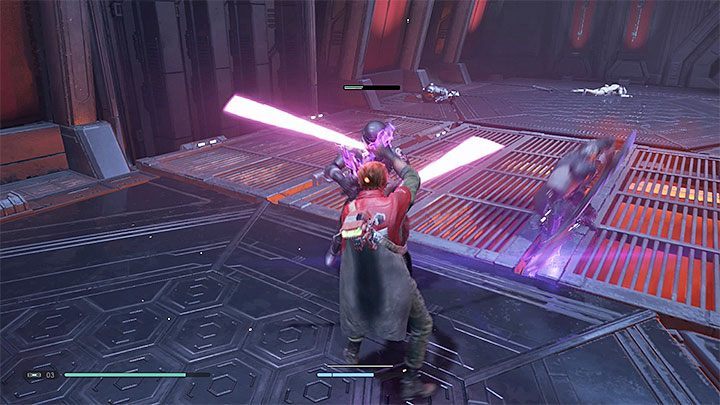 Other, unfortunately quite intensive, battles are awaiting you in this room. As always, search for opportunities to push enemies away, especially if you've purchased upgrades to increase the area of effect of your Force Push ability.

During the battles you will encounter various enemies like Stormtroopers with melee weapons & blasters (including one elite unit), flamethrowers (attack them when they replace the tank) and rocket launchers (don't risk with deflecting the rockets, just quickly get rid of enemy units). In addition, Security Droids (avoid their red attacks - when they try to seize and capture Cal) and Purge Troopers (eliminate them one by one) will appear in the room. In the final stage of the battle, the lower platforms will change their position. Watch them carefully so you don't get surprised. After winning the battle, a meditation point will be unlocked here. 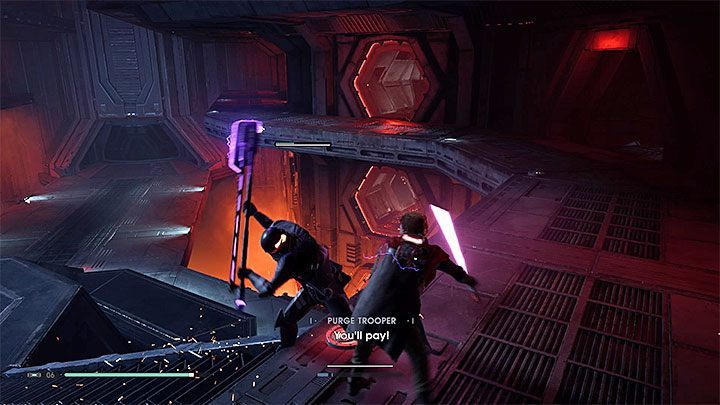 Open a new door with the help of BD-1 to get to the prison block. Explore its upper levels and personally eliminate Stormtroopers with blasters, or you can deflect their projectiles while our run around the area. Purge Trooper (from this location) should be defeated at the very end. Once again take advantage of a great opportunity to easily push your opponent off the ledge.

After the battles, use the control panel located upstairs which will launch a cutscene with Cere. A new passageway has been unlocked on the ground floor and you can use it. 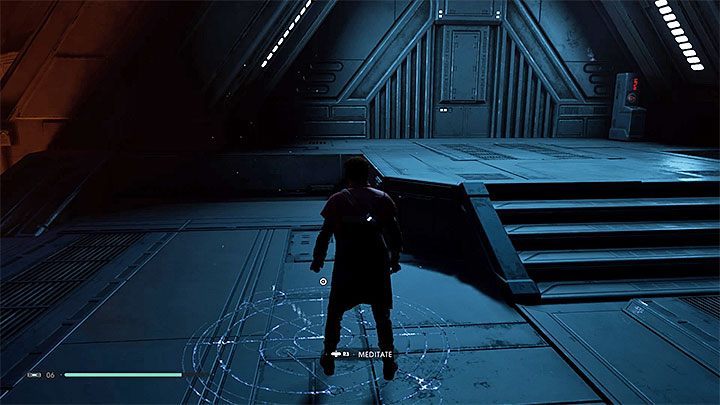 You will reach the Fortress Citadel. Extend the first bridge, walk over it to reach the central platform and extend the second bridge. Be sure to rest at the meditation point shown in the screenshot - this is the last spot of its kind before you advance to the final battles.

Step into the Interrogation Chamber and walk up to one of the interactive panels. After a while, Trilla will appear - it's time for the final duel with the boss. 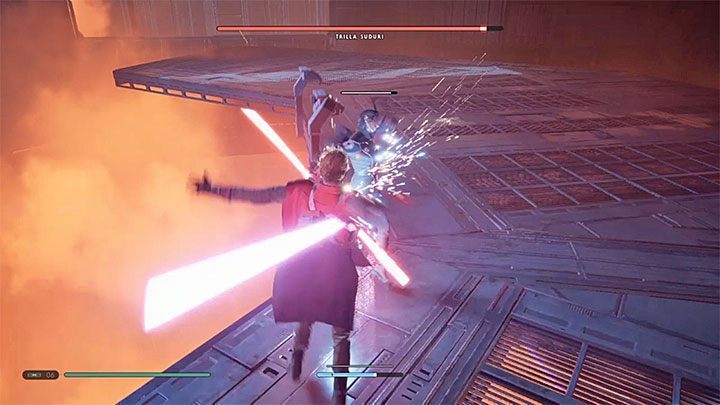 In comparison to previous battles with Second Sister this duel will not end prematurely. You must deprive Trilla of all her health points (her health bar has to drop to zero). The Second Sister uses a double-bladed lightsaber. She uses her lightstaff to perform various strikes and series of blows. Don't try to interrupt them with standard attacks.

Use the same tactics as during the duel with Malicos - launch your attacks as soon as Trilla finishes her attack sequence. Also, you can prematurely interrupt her attacks with Force Push ability. Trilla is unable to completely block your Force Push attacks cause she is prepared for them - keep in mind that she can lose less stamina points than if one of her attacks was interrupted. 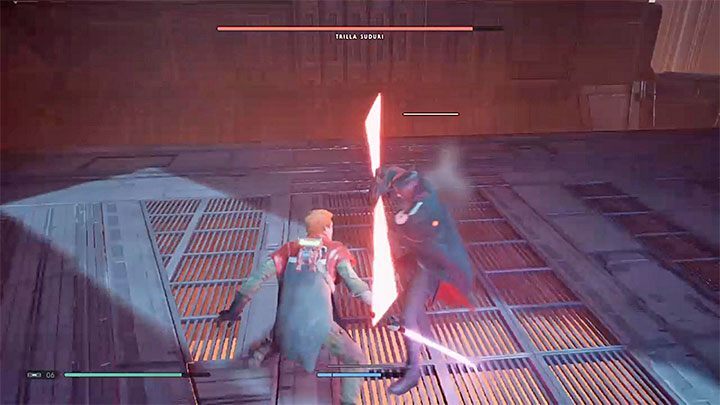 Trilla has the ability to move quickly around the arena. Even if she's standing relatively far from Cal, she can appear right next to him in no time at all. You must always be ready to evade her attack(s) that will begin right after she teleports towards you - jump away from her or try to block/parry the upcoming strike. 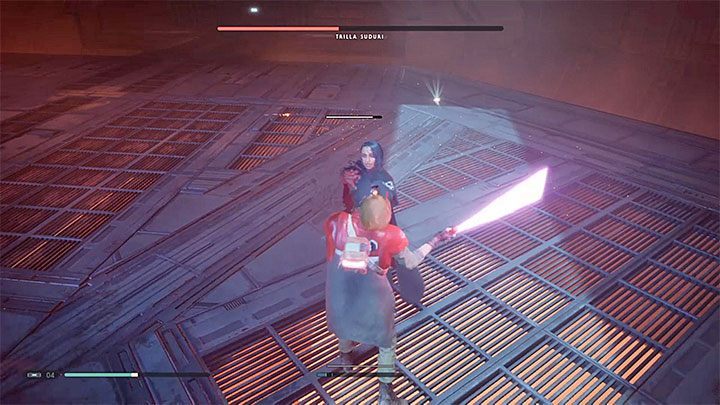 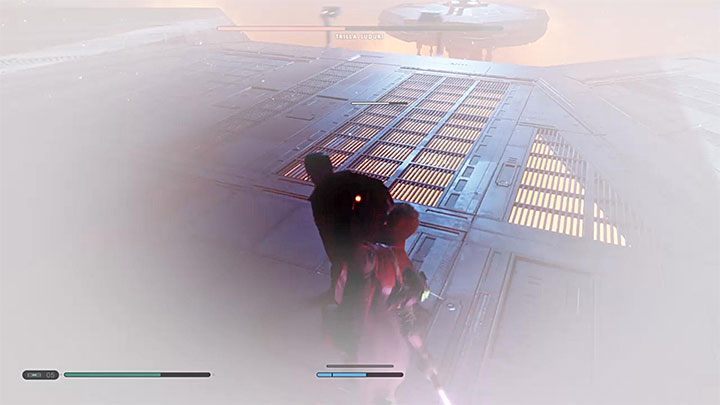 Trilla has many unique attacks at her disposal. The most serious attack is the attempt to capture (seize) Cal. This occurs after Trilla drops a blinding flashbang grenade. If you get captured, you will lose a lot of health (example shown in screenshot 1). The only way to avoid this attack is to jump backwards or to the sides at the right moment (example shown in screenshot 2). 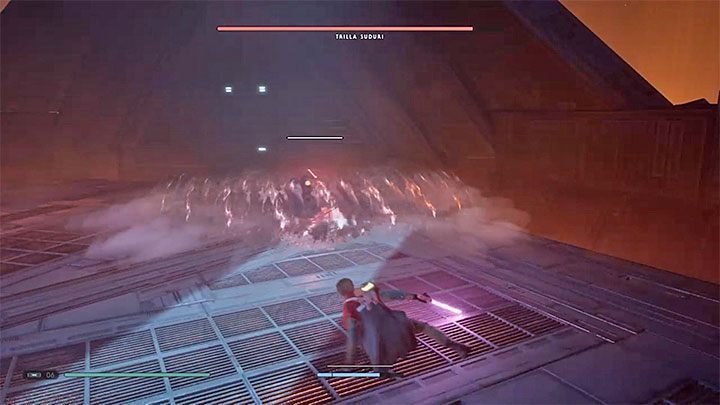 Another red attack of Trilla is an area of effect strike in form of a shock wave. It moves quite fast so you have little time to make a double jump and avoid collision with the wave. 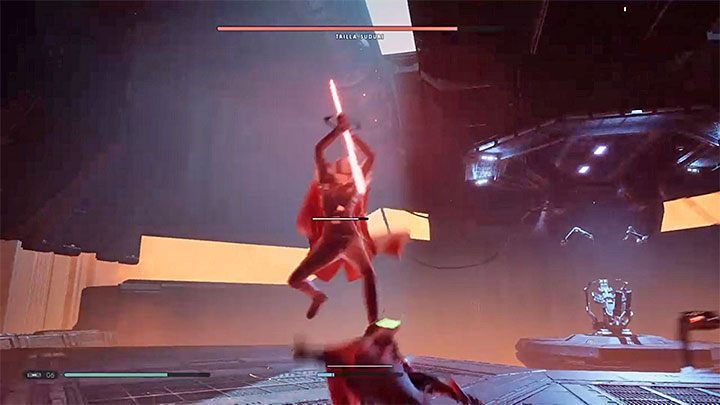 Also, Trilla has more traditional strikes and blows at her disposal. These are lightsaber stabs, a twisting-slash attack and a lightsaber ground strike. Combat tactics are quite obvious in such cases - don't try to block these attacks but jump backwards or to the sides to avoid getting hit. 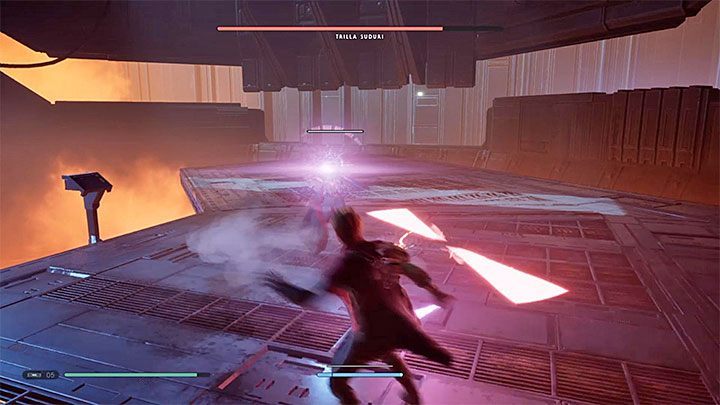 The Second Sister, just like Malicos, knows how to throw a lightsaber. The best reaction to this type of boss attack is to use your Force Push power. This will immediately stop any such attack. So, you won't have to worry about being hit by a flying lightsaber or worry about using block at the right moment. 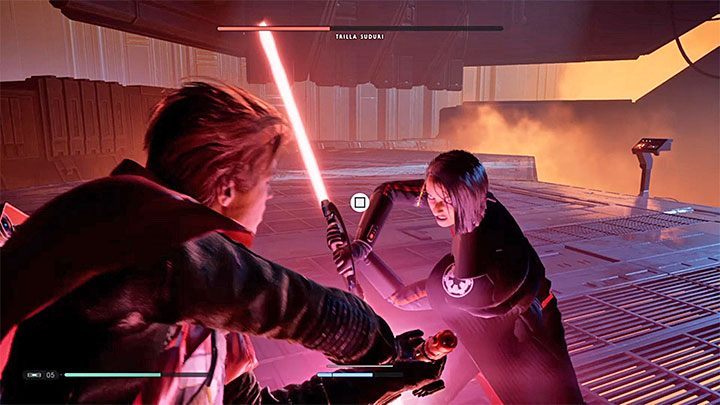 The most effective technique to gradually weaken your enemy is to activate the Force Push each time she tries to start an attack - then run towards her and launch a series of attacks with your lightsaber. Even if Trilla doesn't lose any health points at once, her stamina bar will be significantly depleted. More attempts of this kind will be more successful. Use standard attacks only if you have exhausted your Force bar.

You may also be forced to grapple and clash with lighsabers during the battle, but it is a simple sequence - just quickly press the indicated button to win. 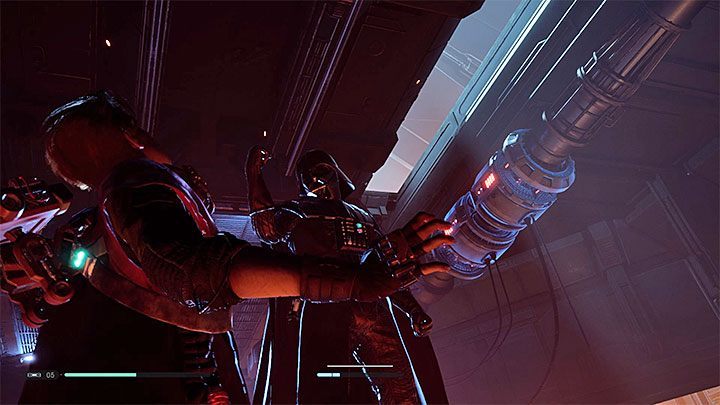 After winning the duel with Second Sister, Darth Vader will appear. You will not take part in any sort of full-fledged duel with Darth Vader. Despite that, you still have to complete all the steps described below in order not to get murder by the evil-twisted Anakin Skywalker.

After watching the cut-scene, try to attack Darth Vader, who will use the Force Grip ability. Rotate the camera to the right and become interested in the object around which has been highlighted with a blue glow. Use the Force Pull ability. 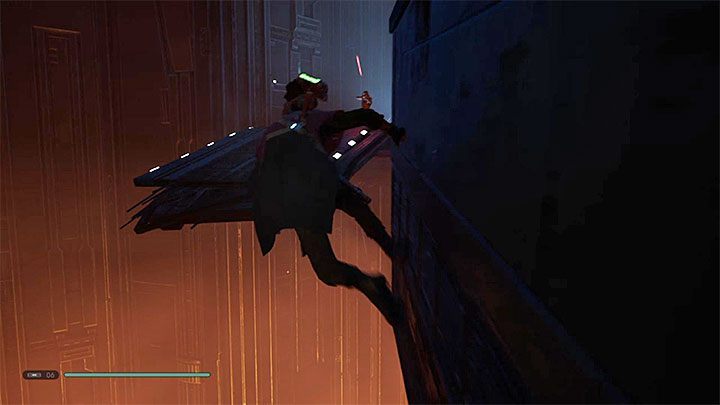 Cal will be thrown away. You have to run away from Darth Vader, so don't get into the fight with the Stormtroopers. Focus only on running away.

Run on the left balcony and jump to the central platform. Part of it will collapse. Then, you will slide down. You have to run over the right vertical platform and make a jump towards the new ledge. 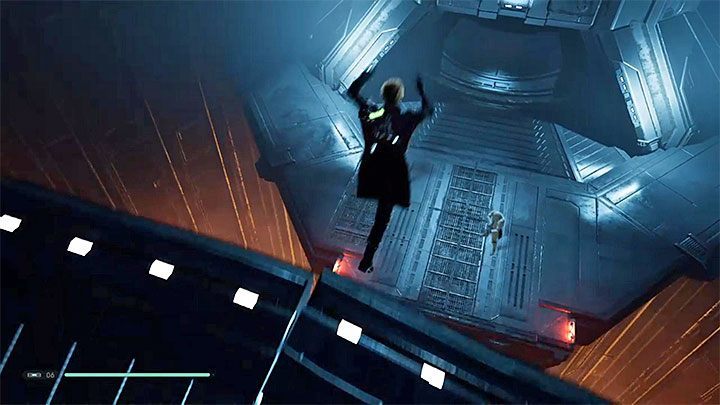 Jump to the levitating bridge and wait a moment until it gets closer to the lower platform shown in the screenshot. Jump on it (if you want you can land on one of the Stormtroopers).

Enter the elevator and press the button on the left. The elevator will start to move. Cal will temporarily escape Vader. 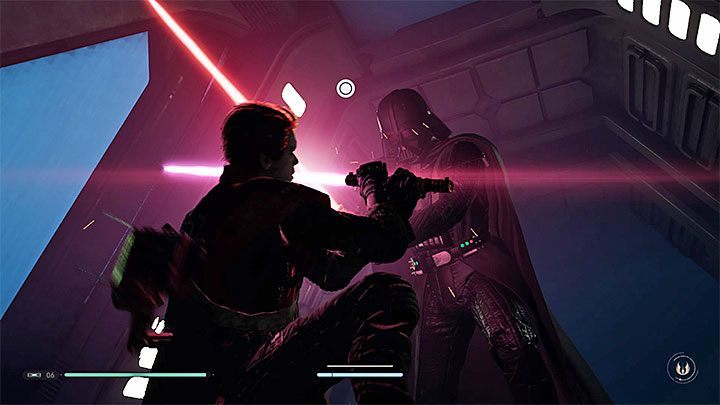 When you leave the elevator, continue to run straight ahead. The last confrontation with Darth Vader will take place just after you open the door. Start by quickly pressing the indicated button while you clash and wrestle with lightsabers. 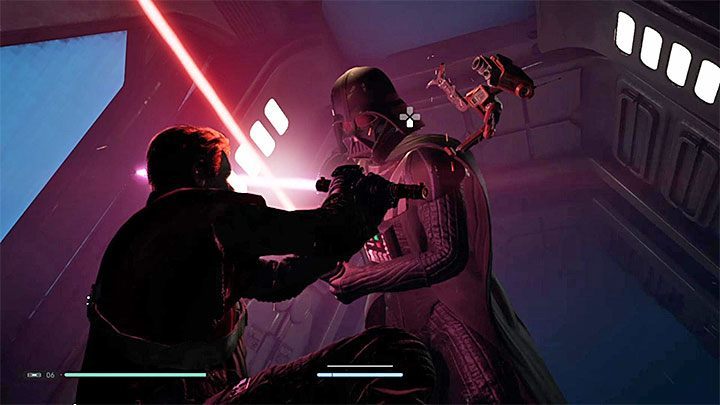 Wait until BD-1 climbs on Vader's back and press the button to ask the droid for help. BD-1 will electrocute Vader. 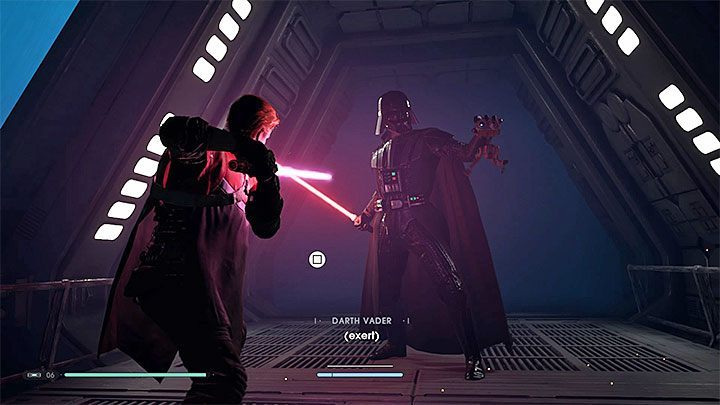 At the very end press the attack button to strike with your lightsaber. Now, you can watch the final cutscenes which conclude the entire story of the game.

Can I continue playing after the main campaign is over? 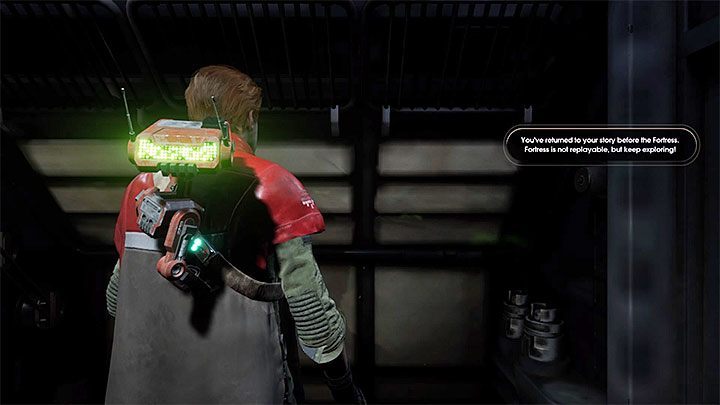