This page of the guide to Star Wars Jedi: Fallen Order focuses on the fight with a large flying creature - Gorgara. You encounter this boss in the fifth chapter. Our walkthrough page has the list of all its attacks and presents the suggested battle tactics. 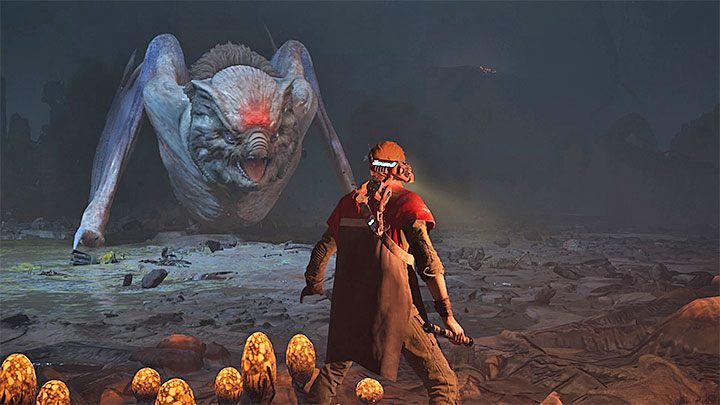 The duel with Gorgara is mandatory - you can't miss it. This fight consists of two parts. The more important difficult first part will begin when you reach the Witches Horn cave on Dathomir. Gorgara will appear after the main character examines the corpse found in the cave. 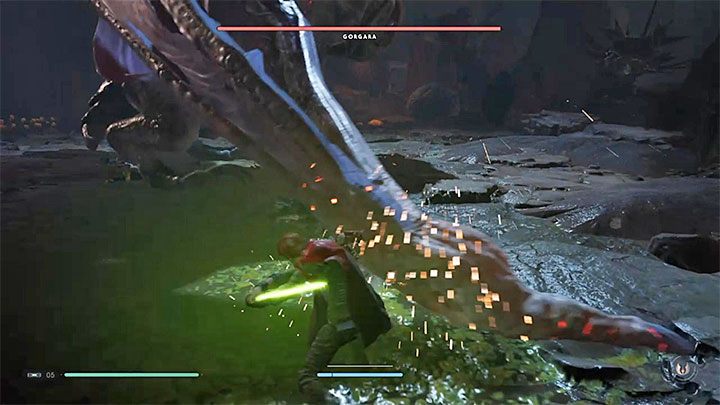 During the fight, Gorgara attacks primarily by hitting the ground with its upper limbs. These are both usual attacks and red ones which are more dangerous. After using a red attack, the boss will stop for some time. This is an opportunity to attack the limb stuck in the ground.

When you attack the boss's upper limb that is stuck in the ground, you follow the game's suggestion to switch between the targets (in this case, different parts of the boss's body) or temporarily disable the lock-on. 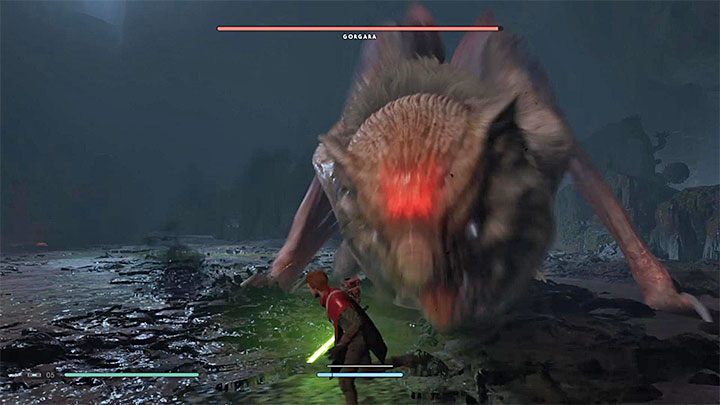 Gorgara's another attack is biting. This attack telegraphed by the boss - this should give you enough time to dodge backward or prepare to block/parry (this isn't a red attack). 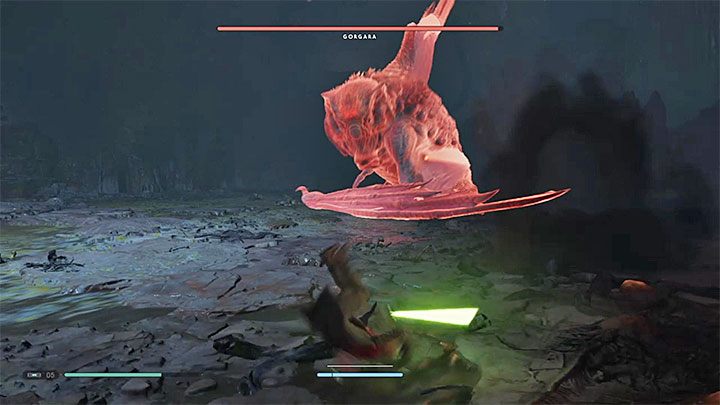 Gorgara can also attack you with its wing. This is a red attack, so don't try to block it. An additional problem is that this attack has a large radius. Either move quickly away from the boss or try to double jump over the wing (this can be difficult). 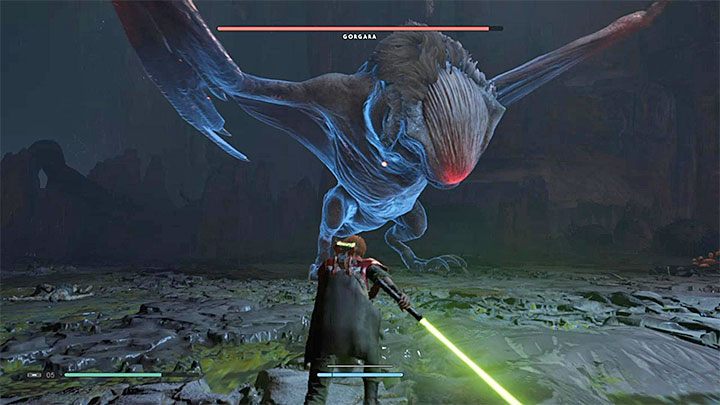 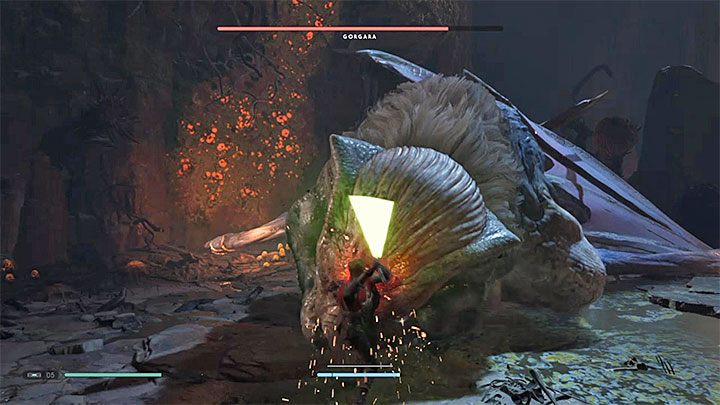 After several successful attacks, Gorgara will be stunned (example in picture 1). The blue glow around the monster signals that you can use the Force - use Force Pull to knock the boss to the ground. This will allow you to run to Gorgara's head and perform a few attacks (picture 2). 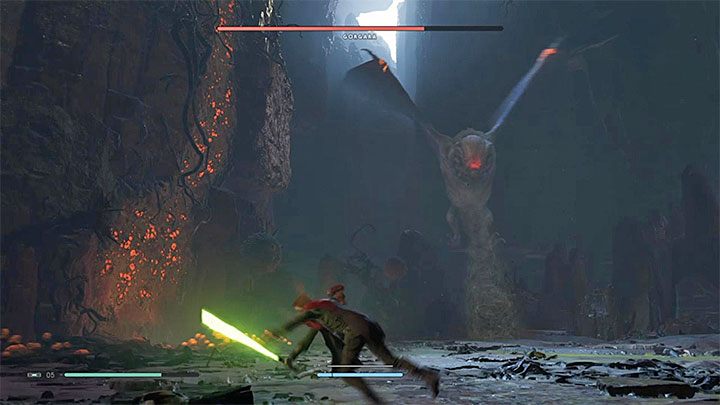 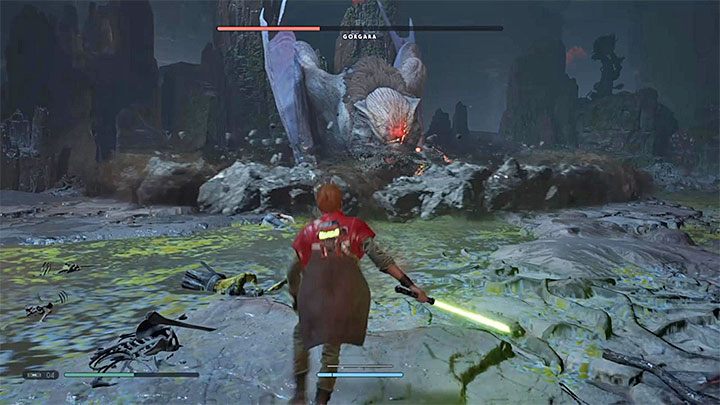 In the next phase, Gorgara will start flying around the cave. The boss now has two aerial attacks: 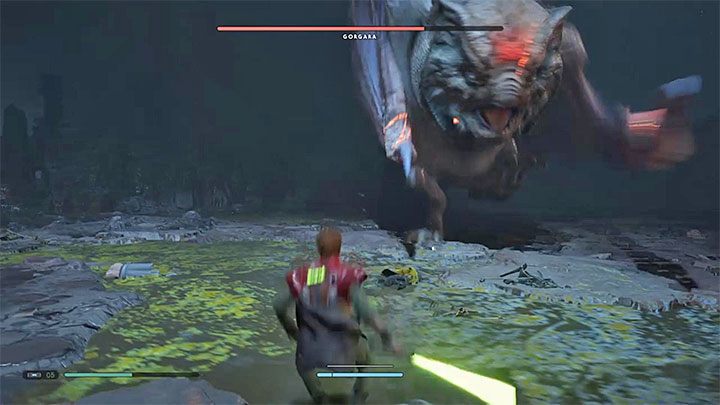 In the later phase, Gorgara will start to run around the arena. Don't risk here, focus on dodging. Wait for the boss to start using its main attacks again - this is the easiest way to weaken it. 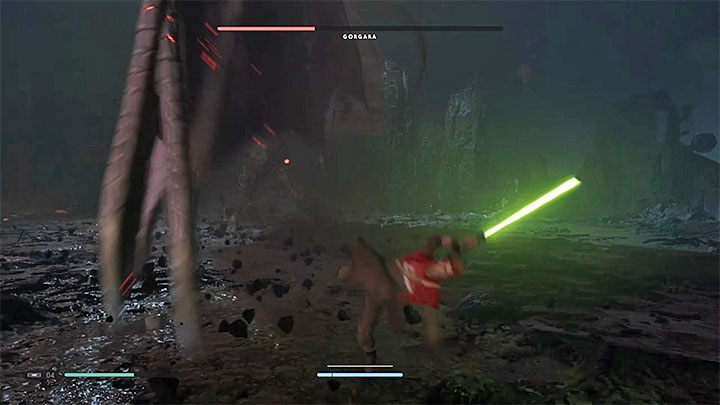 One of the later boss's attacks is wings flap. Fortunately, this is one of the heavily telegraphed attacks - you should have plenty of time to move away from the boss to get out of reach of its wings. 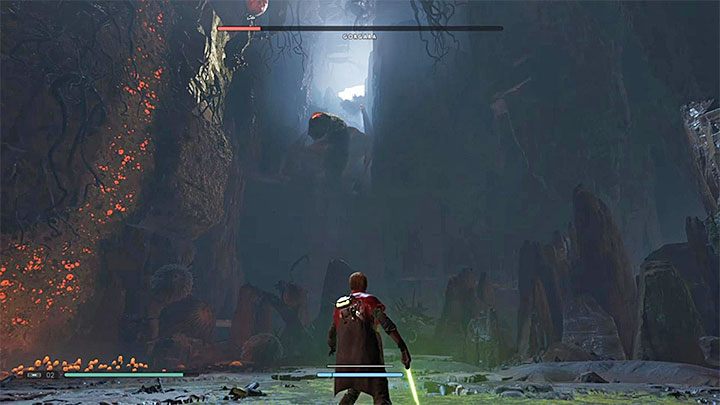 You can't kill Gorgara yet. The boss will escape from the cave when it has a few health points left. 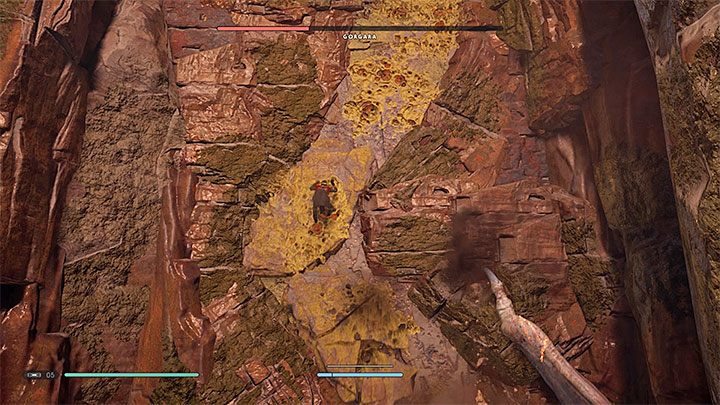 The second encounter with Gorgara will take place shortly after leaving the cave and using the newly acquired claws. The second phase of the fight is very simple - it is a climbing sequence combined with a free-fall. You won't deal damage directly to the monster.

During the climbing sequence, you just have to keep climbing without stopping. This will prevent Gorgara from reaching Cal. 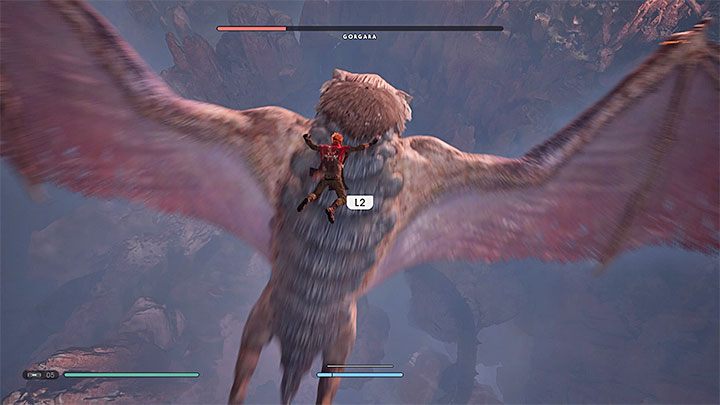 In the free-fall sequences, you have to guide Cal to Gorgara's ridge to make the attack prompt appear on the monster (example in the picture). Fortunately, if you make a mistake, the game will allow you to try again without any punishment. 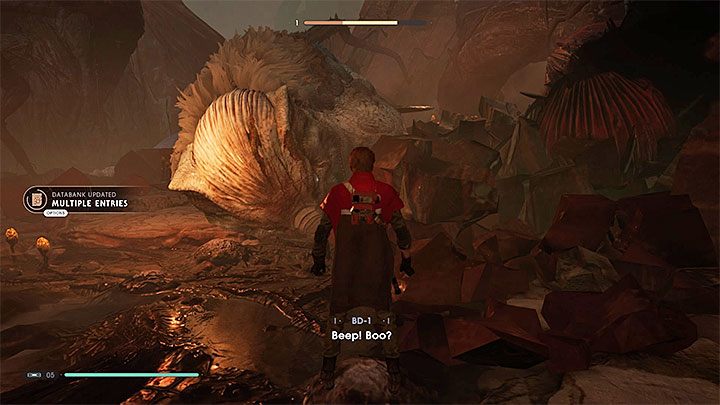 After completing all the climbing sequences and free-falling, Cal will finally defeat Gorgara.