This page of our guide to Star Wars Jedi: Fallen Order has a detailed walkthrough of the second visit on Dathomir which takes place at the end of the fifth chapter. The goal is to get access to the Tomb of Kujet. Inside the tomb, Cal will have to participate in a challenging boss fight with Taron Malicos.

Return to the Tomb of Kujet 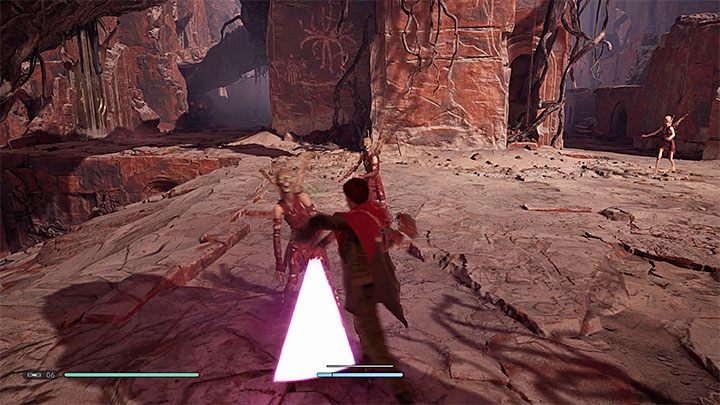 When you are done with Ilum, use the galaxy map to fly on Dathomir. You have to visit the Tomb of Kujet again - this is the same location where the main character lost his lightsaber.

On the way to the tomb, expect numerous encounters with spiders and Undead Nightsisters - you can eliminate enemies or avoid them and focus only on the main path. Enter the tomb again. 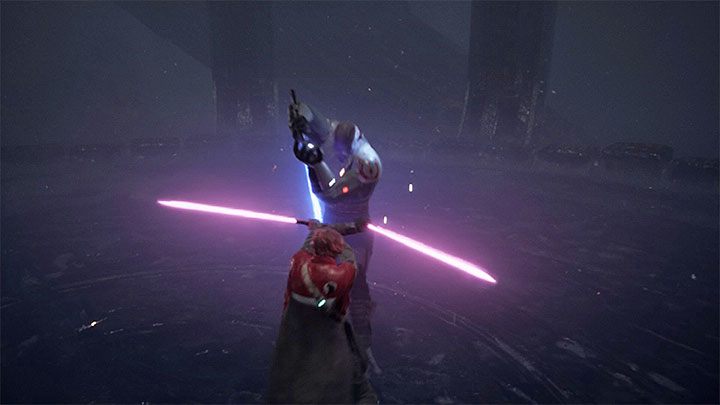 You will meet Master Jaro Tapal again. To pass the test, use the Split Saber attack (hold L1/LB and press Square/X on the controller). After a successful attack, press the button displayed on the screen (Circle/B on the controller).

This will trigger a cut-scene. Be sure to use the meditation spot. Either defeat or run away from the Nightbrothers found in the next room. Select the narrow passage to reach the next part of the tomb. Watch the cut-scene during which Cal will meet Nightsister Merrin. 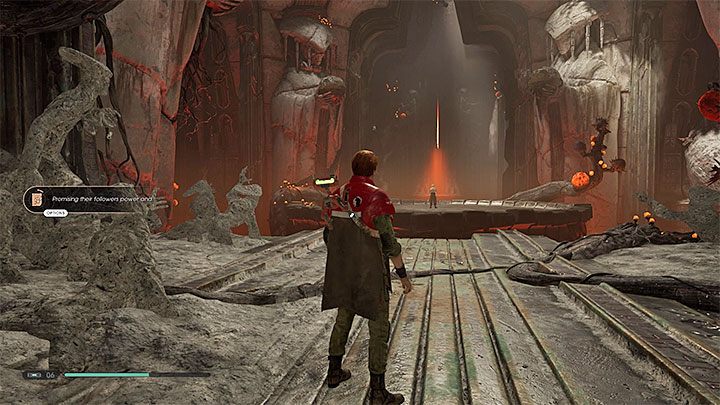 Head to the visible in the circular arena visible in the distance - you will encounter Taron Malicos. As you approach the arena, Merrin will create a bridge for the hero. Enter the arena, watch a cut-scene, and face Malicos. 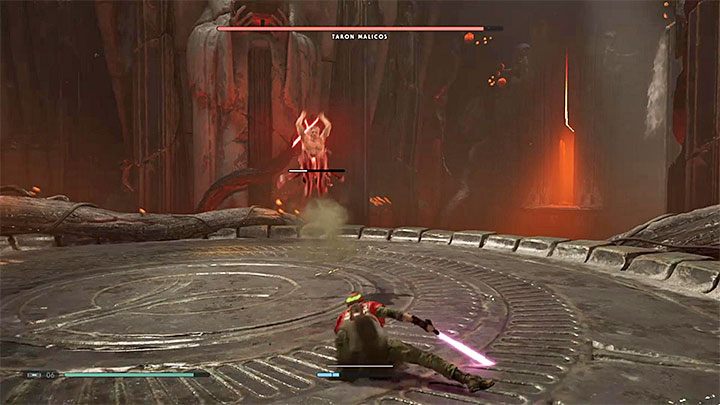 Malicos will use a split lightsaber throughout the entire duel. The boss will perform a series of attacks. Avoid interrupting them with normal attacks - wait until the series is over or you can try to parry his attacks.

The boss also has red attacks. These are primarily aerial attacks that end a series of regular attacks. 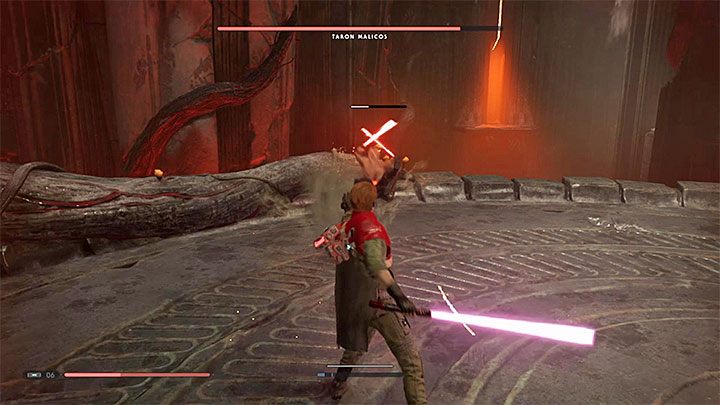 You can easily interrupt Malicos' attacks with Force Push. The important information is, however, that it will only work if the boss is performing an attack (normal or red). Otherwise, this attempt will fail - Malicos blocks any push. You will only waste the Force.

Force Push is especially useful when you are near the edge of the arena. The boss won't move too far away - you will be able to reach him faster and attack before he gets up. 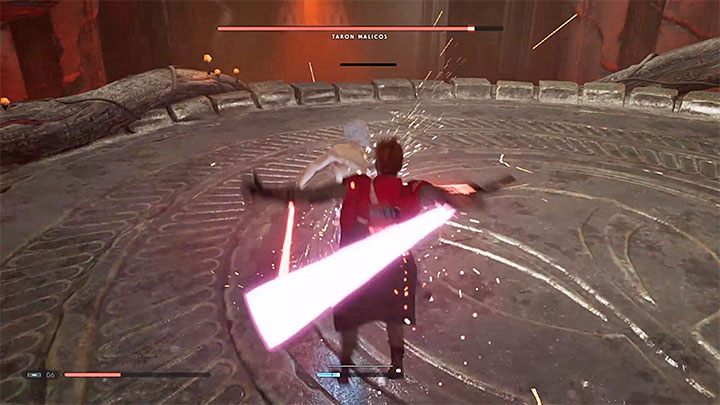 Follow the same tactic used during the duel with the Ninth Sister - try to deplete the boss's stamina bar. Once Malicos loses the white bar above his head, he will become vulnerable to your attacks for a brief moment - you can attack him once or decide to make a few strikes. 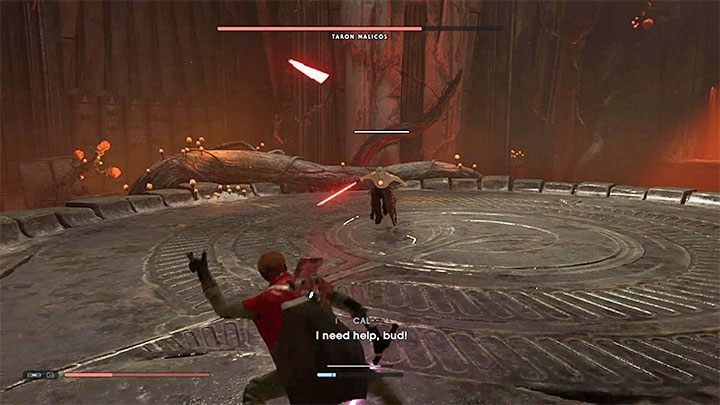 The boss likes to "play" with his lightsabers. Malicos can attack you with one blade while the other is levitating. You can't underestimate this move - the boss will throw the other lightsaber at the right moment. You can try to stop the whole sequence by using the Force Push or be ready to deflect the incoming lightsaber.

In the next stage of the battle, this attack can evolve - Malicos will throw both lightsabers and perform a red attack from the air. Block the lightsabers and use Force Push to cancel the boss's leap. 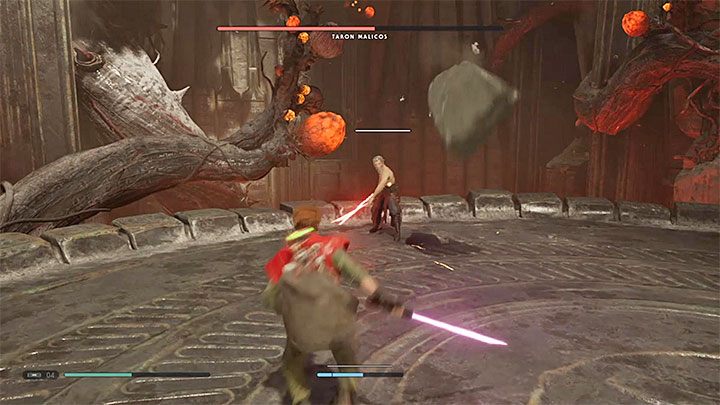 Malicos can throw boulders at the hero. In the initial stage of the battle, he throws single boulders. However, in the next phase, he will throw a few of them - three single throws and a separate throw of three boulders. You can try to deflect them, jump to the sides at the right time, or run to the boss and interrupt the whole attack with Force Push. 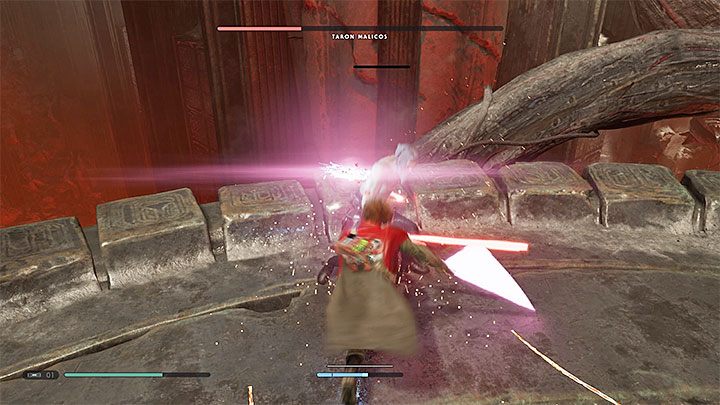 In the second phase (the one that begins after a short cut-scene), expect occasional support from the Nightsister Merrin. She can help the main hero to stop Malicos and deal him damage. Use her help to deal damage to the boss when he is briefly exposed to your attacks. 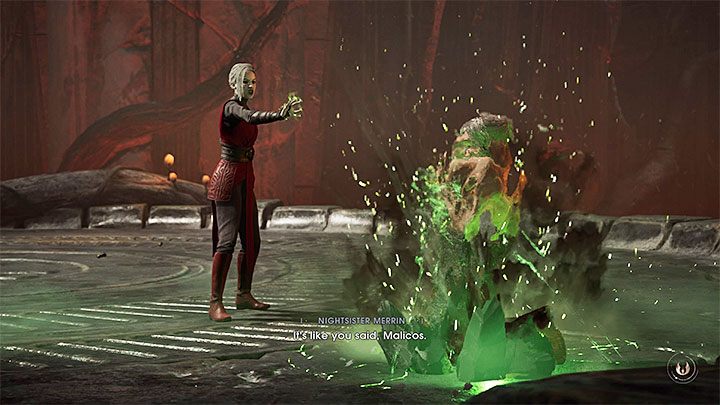 After defeating the boss, Merrin will appear again.

Use the meditation spot and go to the next part of the tomb. Explore the structure at the very end of the corridor to trigger another cut-scene. Nightsister Merrin will join the team and will since travel with you aboard the Mantis.

Return to the ship 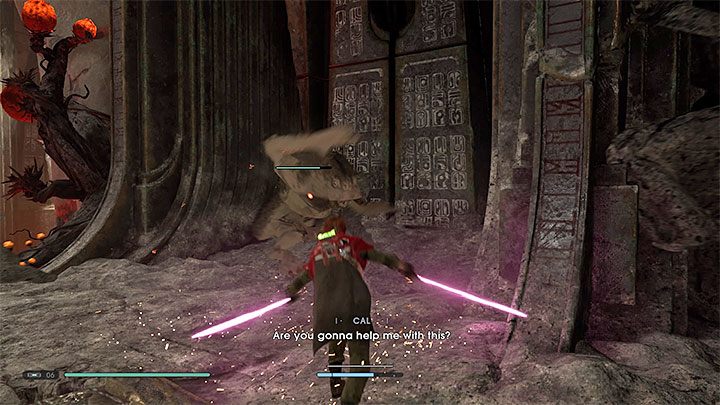 Go back to the Mantis. Merrin would first appear in subsequent locations, but she will eventually move on board the Mantis. Two Nydaks will appear near the place where you fought Malicos. You don't have to run away from them - use the Split Saber attack to defeat them fast.

You can either kill or avoid the next enemies. Board the Mantis and watch a cut-scene. Your next destination is Bogano.