This page of our guide to Star Wars Jedi: Fallen Order has a detailed walkthrough of the visit on Ilum. The fifth chapter focuses on another Jedi temple. The main purpose of the visit is to build a new lightsaber for Cal, but before that happens, you will need to, e.g. solve a puzzle with crystal. In the later part, you will be attacked by numerous Stormtroopers. 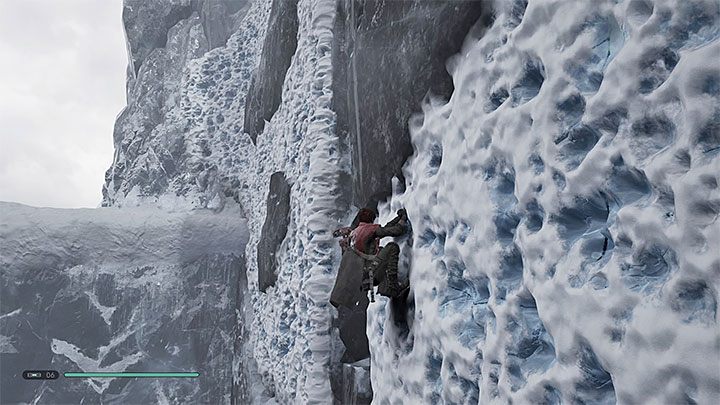 After reaching Ilum, leave the ship and start exploring the planet. You won't encounter any opponents, but the visibility will be greatly hampered by a snowstorm. You need to get to a place where you can use the claws on a climbing wall.

During this section, you don't have to get to the top - apart from the (optional) echo, you won't find anything interesting there. Instead, look for the wall presented in the picture above. Cal can move to the left and reach a new side shelf.

Solving the puzzle with the crystal 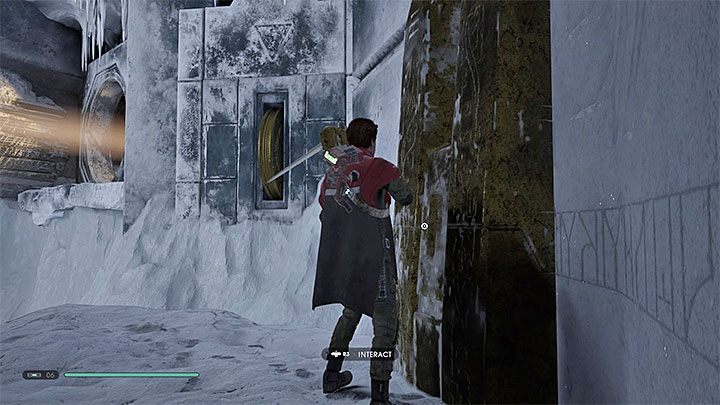 In the new location, catch the line and go with it to the nearby attachment point. This will open a passage with light. Run on the left wall to get to the lighted window. Go to the room with a hanging crystal - time for another puzzle. 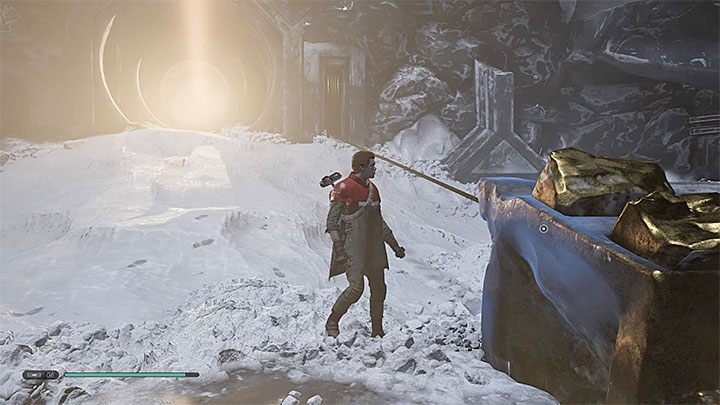 Use the interactive mechanism under the hanging crystal and use Force Pull on it to change its position. You can grab the nearby line. Take it to the mechanism and connect them. The window will open, casting the light. 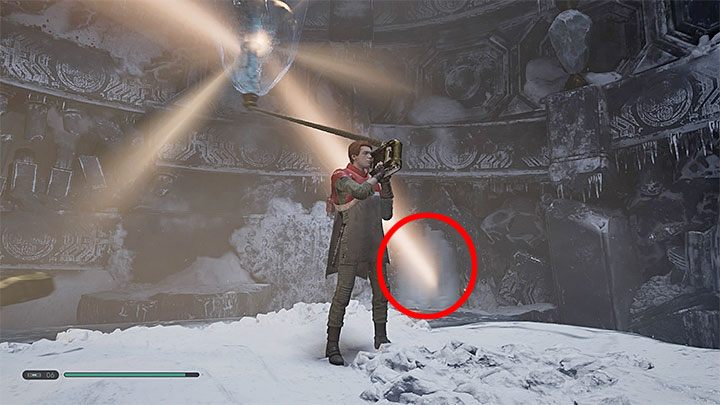 Use Force Pull on the line attached to the crystal. If you move while holding this line, you can move the crystal in a limited range. The crystal must be in the same position as in the picture above - the light must be reflected from the crystal to melt the ice and unlock a new passage. 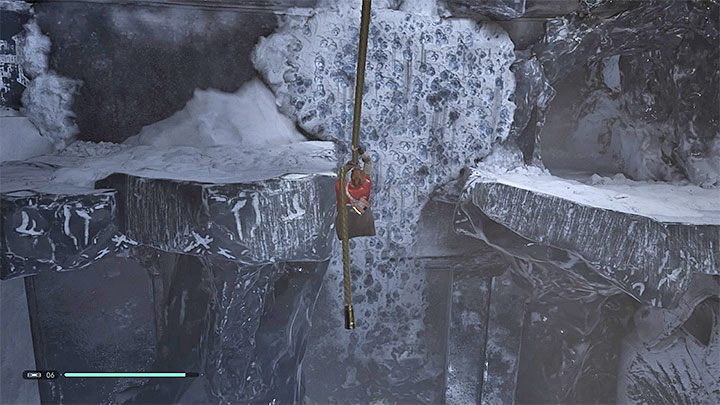 Use Force Push to push the swiveling mechanism to the opposite end of the hall. Grab the line tied to the crystal once again, but this time you have to swing on the rope to jump to the opposite shelf. 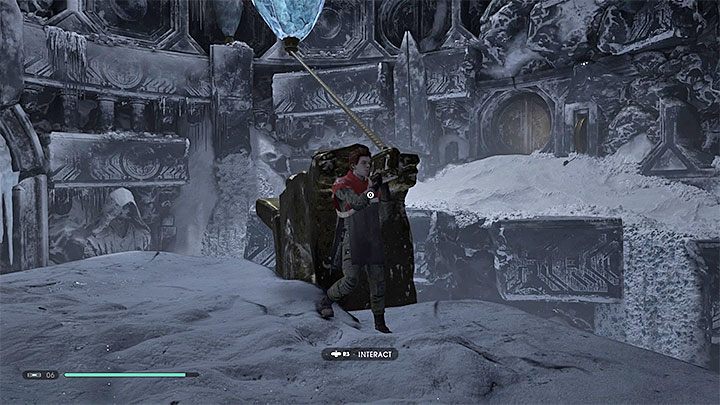 After landing on the new shelf, use Force Pull to grab the line attached to the crystal. Connect the line to the mechanism - see the picture above. After that, use Force Push on the rotating structure with the rope attached to it. It will move to the opposite end of the hall. 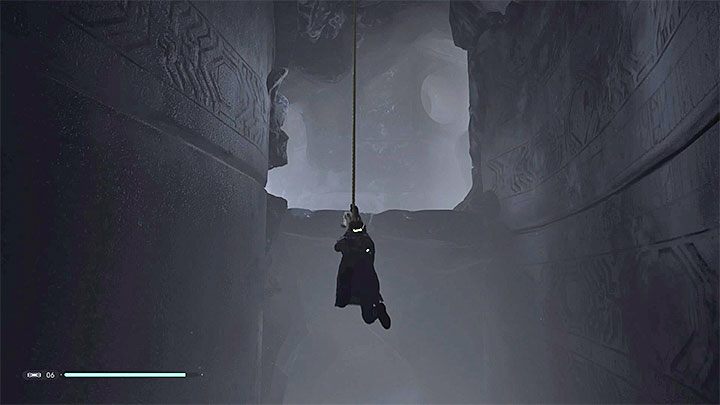 You can go through the passage revealed by melting ice. Ignore the found crystal. Instead, grab the line to get back to the top level. Return to the room with the crystal. 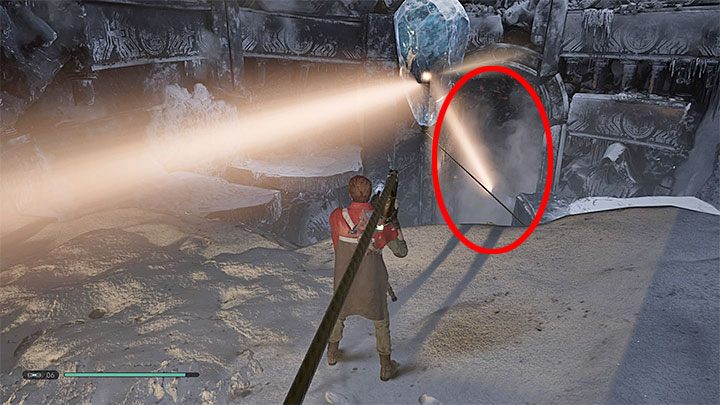 The place where you can open the windows is at the top level. You can do this by grabbing the line and moving backward with it. The rays should illuminate the crystal, which will melt the main lower passage (the picture above). You can let go of the line and go to the recently unlocked exit. There's a meditation point there.

Reaching the place of building a lightsaber 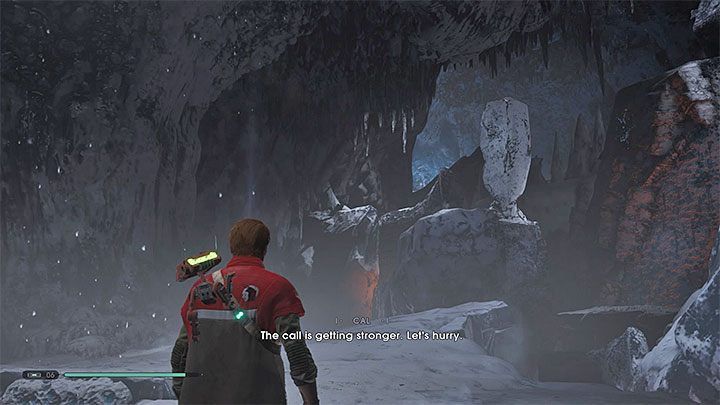 Jump into the water, dive and swim through the reservoir with geysers. There is a climbing wall at the other end of the reservoir. You are in the Crystal Caves, which are the largest location on Ilum. Go to the central part of the caves. Along the way, you have to complete another sequence during which Cal will slide down. Grab the climbing wall and get to the zone with a meditation spot. 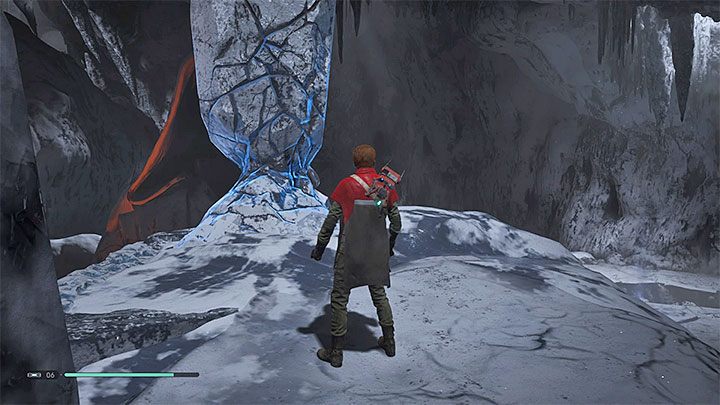 It is worth noting that you can encounter several hostile Probe Droids. You can ignore them or destroy - deflect their bolts or pull towards Cal and hack (if you have the appropriate skill).

Find the place where you can run on the walls and get to the interactive rock shown in the picture. Use the Force Push on it to unlock the access the further part of the cave. 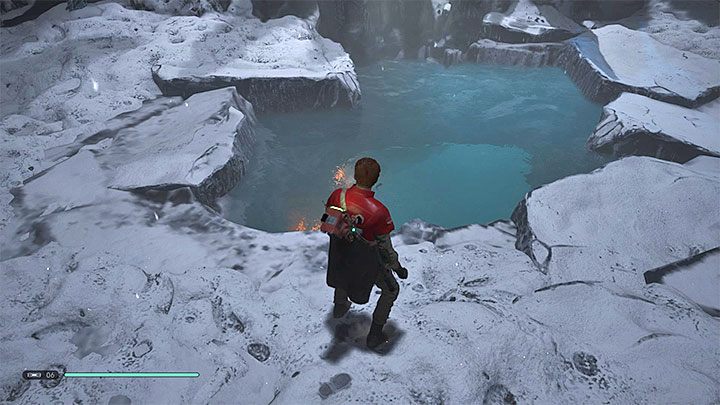 Use climbing wall and get to the place where you can jump into the water again. Swim through the smaller underwater tunnel. After leaving the water, use the claws on the next climbing wall. 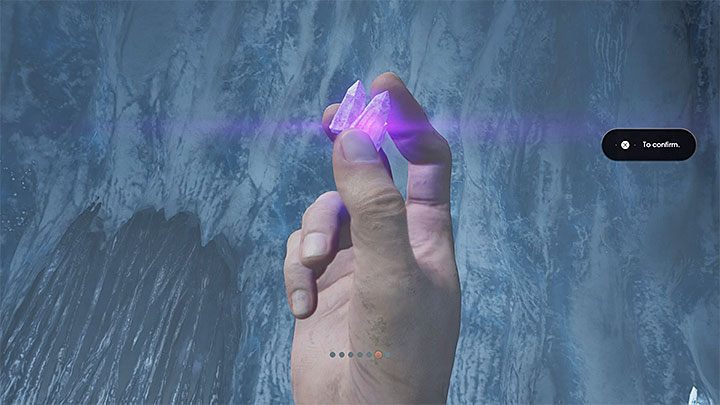 Squeeze through the rocks - this will trigger a cut-scene. Try to get out of the water. Another cut-scene will play.

Take the Kyber crystal to the workbench. Choose the color of the newly built lightsaber. Cal builds a new lightsaber and unlocks the Split Saber skill, which allows you to split the lightsaber into two for a second and perform a powerful Force attack.

If you don't like the color of the sword, you can use the workbench and change it. You will be able to choose the same colors as those available when you were creating a new lightsaber.

Return to the Mantis 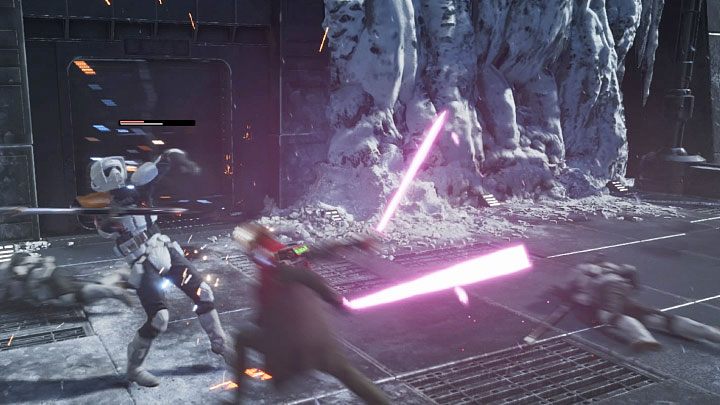 Use your new lightsaber to break through the icy corridor. You will find a meditation spot. You should use it - soon, you will participate in intense battles. You will encounter the first Stormtroopers immediately after leaving the cave. Fighting them is a good time to test Split Saber attacks (hold L1/LB and press Square/X on the gamepad). This type of attack is great for attacking a group of opponents (especially when switching to the double-bladed lightsaber) and dealing a lot of damage. Unfortunately, they consume the Force so you also need to rely on regular attacks from time to time.

Reinforcements will appear in the area. If a large group of Stormtroopers stands on the edge of the platform, use this opportunity to Force Push them into the abyss (especially if you have upgraded the range of this attack). 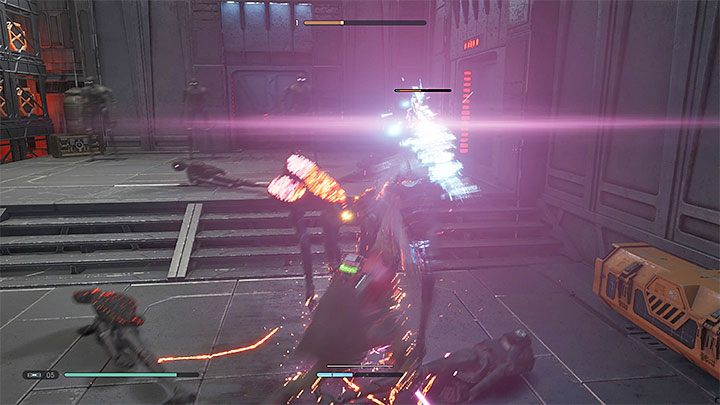 After fighting, let BD-1 to open the door on the right and unlock the shortcut to the main part of the cave. A group of Security Droids is in the next room. Act quickly and attack the droids before they "wake up". Watch out for their red attacks and dodge quickly to avoid getting caught and receiving damage.

BD-1must hack the panel to open further passage. Use the meditation spot and return to the Crystal Caves. 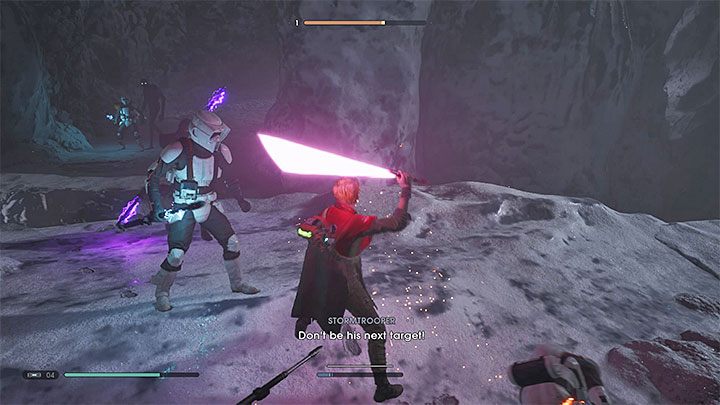 You will encounter more Stormtroopers. More of them are standing a little further - try to quickly deal with the enemy equipped with a heavy blaster and avoid missiles shot by the enemy standing in the distance.

Move through the caves - you will be attacked by a group of enemies. a Purge Trooper is among them. Use the ability to split the lightsaber to kill opponents faster. A little further on you will also meet a group of Security Droids. Try to pull them towards Cal - there is a chance that they will fall into the abyss. 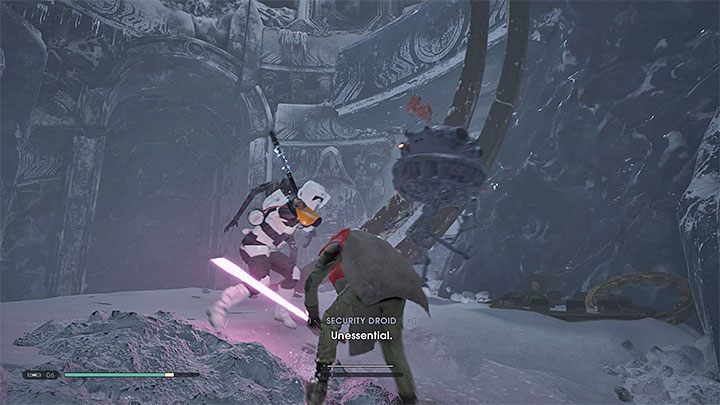 Run along the left wall and grab the climbing wall. Next, you have to dive and swim to the opposite end of the reservoir. Use the meditation spot before you go any further.

In the next section, Cal will be attacked by a group of opponents - among them are Stormtroopers, Security Droids and Probe Droids. It is best to pull the flying droids towards Cal to either destroy or hack them (only if you have the appropriate skill). Reprogrammed droids will help you weaken or distract other enemies. 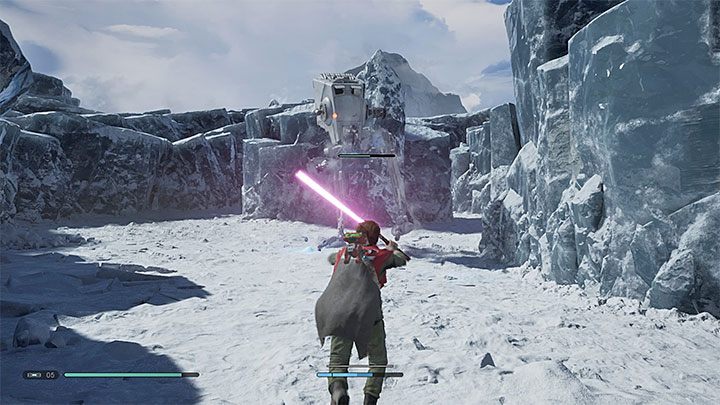 After leaving the caves, Cal will encounter two AT-STs. The big help here is that you should be able to attack them one at a time. Having access to stronger attacks will certainly make things easier, especially if you decide to attack their legs.

After winning all the battles, you can head to the Mantis. Your next destination is Dathomir.