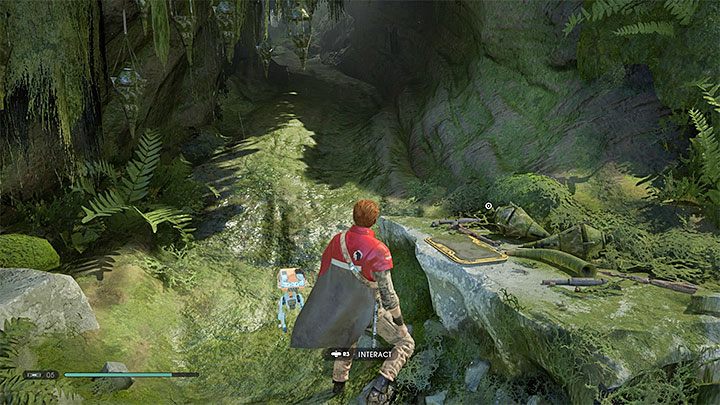 You start in the place where the main character was moved by the Shyyyo bird (Chieftain's Canopy location). Go straight and get to the meditation spot - this will activate Eno Cordova's hologram. Be sure to rest in this place. Another recommendation is to check the workbench. Interact with it to get a double-blade lightsaber (this lightsaber can also be obtained by finding the secret workshop on Bogano).

When you are ready, head towards the bird visible from a distance. Interact with the creature - the Ninth Sister will appear. This duel is long and challenging.

Duel with the Ninth Sister - the first phase 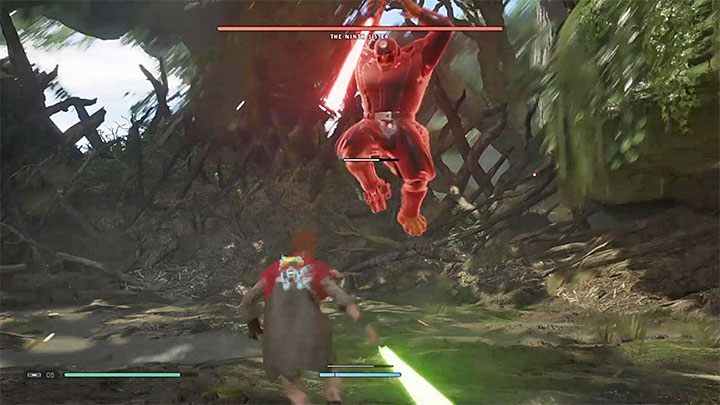 The Ninth Sister fights mainly with her lightsaber. Usually, she performs a series of three swings that can be blocked or parried. She can also use red attacks - in this case, the only effective solution is to dodge to the side or back. Her red attacks are:

Red attacks can be stopped by Force Push but this is rather risky. The important thing is to look for opportunities to strike the boss after she finishes her attack or after she misses with a red attack. 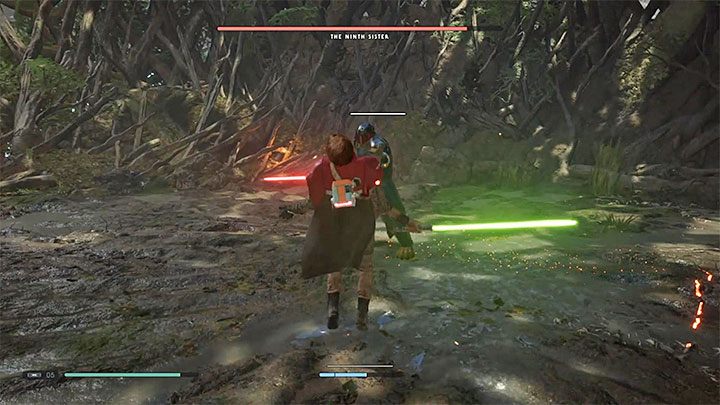 The Ninth Sister can also use the Force - she has access to Force Push and Force Pull. They can temporary stun or paralysis Cal. Wait for the moment when you regain control over the main character and quickly dodge to the side to avoid the boss' lightsaber attack. 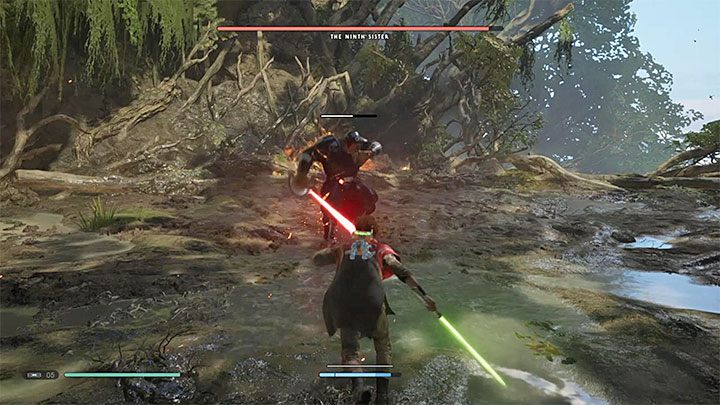 A good tactic is to keep attacking the Ninth Sister to deplete her stamina bar. As a reminder, the boss's stamina is displayed by the white bar above her head.

You can deplete the Sister's stamina bar by attacking her repeatedly but Force Push is a better solution. 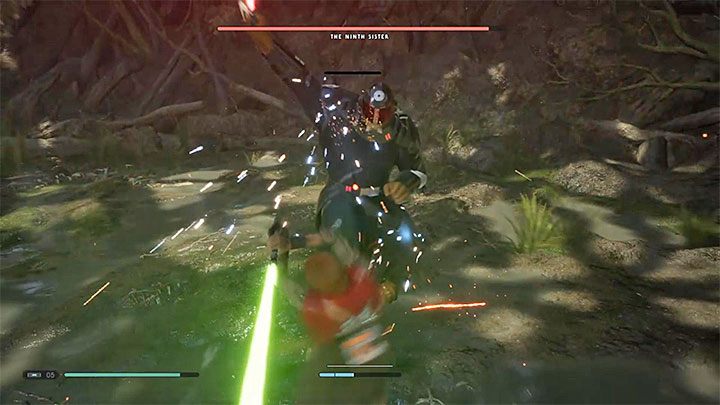 When the Ninth Sister loses the entire stamina bar, start attacking her with the lightsaber - she won't be able to defend herself. Try to deal the boss as much damage as possible before she starts to defend properly again.

Duel with the Ninth Sister - the second phase 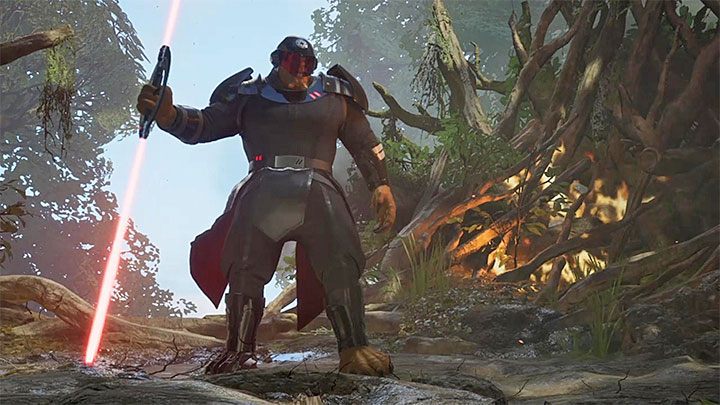 The second phase of the fight with the Ninth Sister starts when she loses about 1/3 of the health. This will be triggered by a short cut-scene. The Ninth Sister will start using a double-bladed lightsaber. It's a good idea to choose an identical lightsaber from the main character's inventory. However, this is optional and you can stay with the "normal" lightsaber. 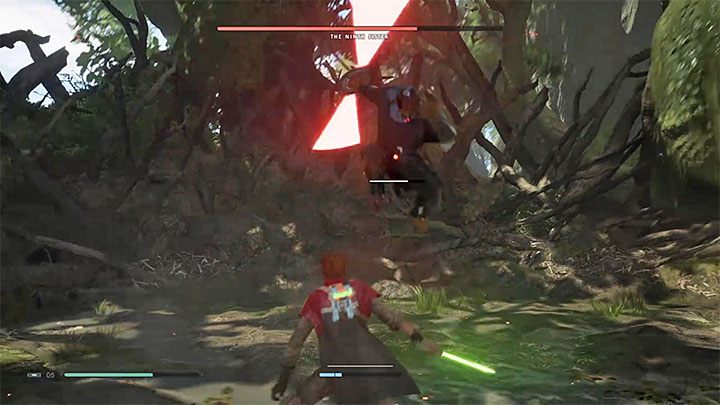 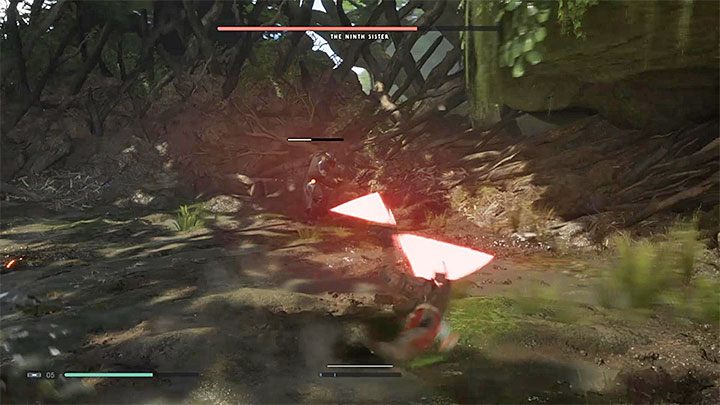 The Ninth Sister acquired not only a new weapon, but also new attacks:

In both cases, you can play defensively and decide to dodge, block or even parry them - these are normal attacks. 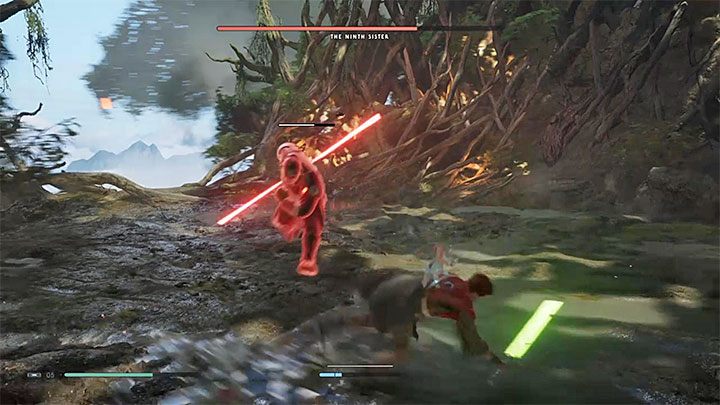 The Ninth Sister's much more dangerous new attack is her red charge. You can't block this type of attack - dodge to the side. You have to practice to learn the proper timing for a dodge. 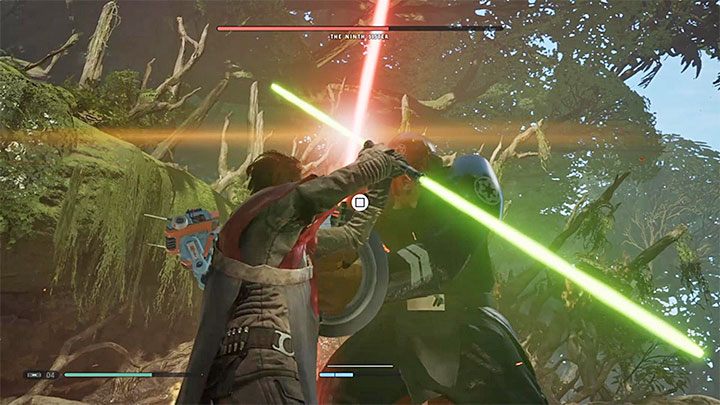 You should focus on depleting the boss's stamina bar. This will allow you to break through the Ninth Sister's defense and damage her with a series of lightsaber strikes.

During this duel, you will have a few lightsaber struggles. Press the specified button rapidly (it will change!) to avoid getting damaged.

Duel with the Ninth Sister - the third phase 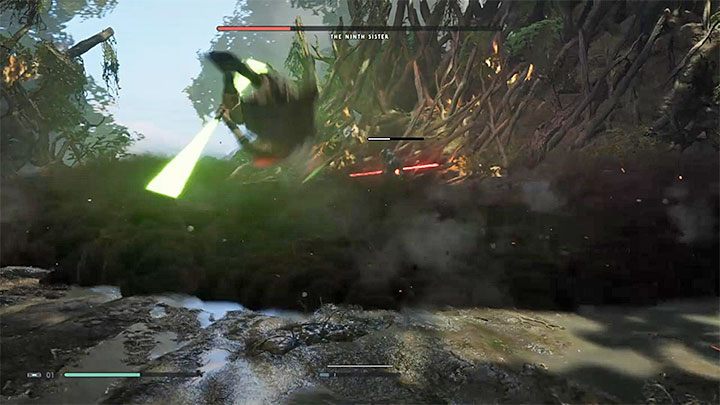 The third phase starts "unofficially" when the boss has 1/3 of her health bar left. The Ninth Sister can now hit the ground and cause a shock wave (example in the picture). Use double jump to avoid getting damaged. 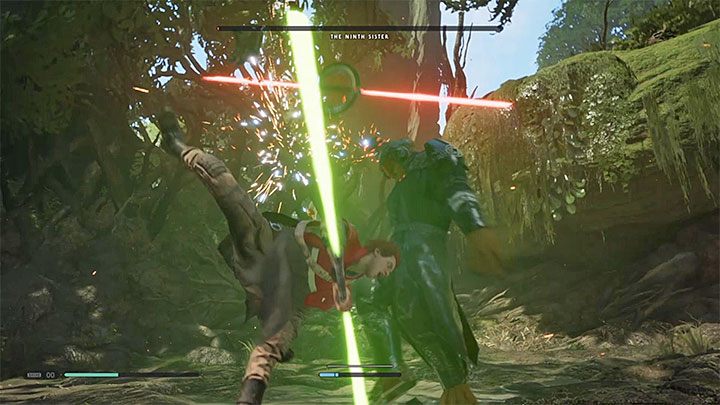 Another problem with the third phase is that the boss can use two charges in a row. Don't get caught and always be ready to dodge.

The duel with the Ninth Sister will end with the final lightsaber struggle. Win, and you will trigger a cut-scene.

Leaving Kashyyyk and returning to the ship 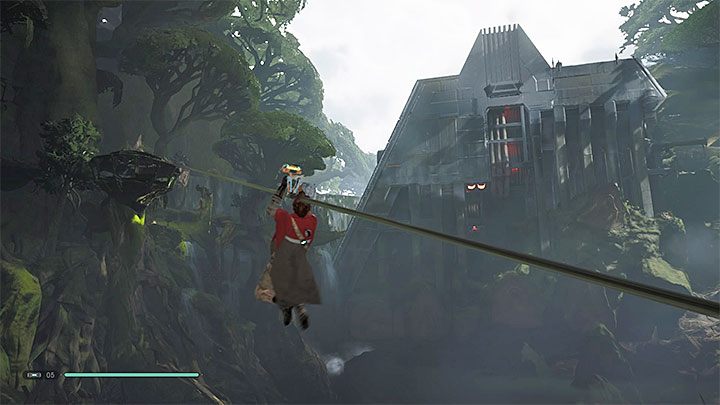 A meditation spot is near the place where you fought the boss. Get some rest before you head back to the Mantis. Watch out for the carnivorous plants and red flowers in Gloomroot Hollow.

Your destination is Kyyyalstaad Basin. Climb the rock shelves adjacent to the tank to get to the line. Use the engine to move to the upper observation tower. Stormtroopers with rocket launchers will appear. Quickly deal with them (preferably in a direct fight). 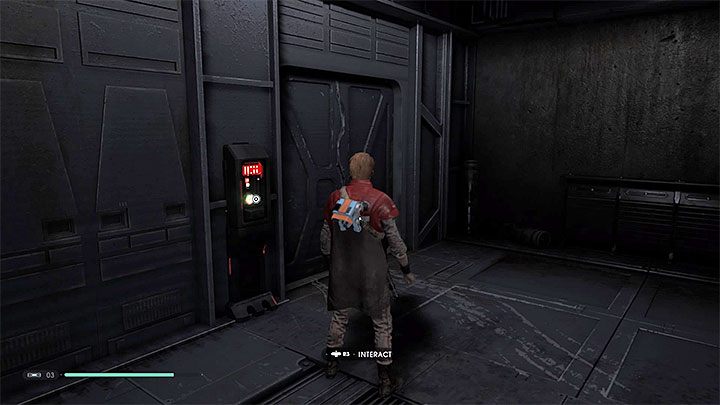 Go through the jungle and return to the Imperial Refinery. You can unlock a shortcut (the picture above) and ask BD-1 to open the doors unlocking the access to the elevator.

Depending on your preference, you can reach the platform from the refinery to the landing pad or go through the starting part of the jungle again. Go back to the Mantis and select Dathomir as your next destination.