This page of our guide to Star Wars Jedi: Fallen Order has a detailed walkthrough of the second visit on Kashyyyk which takes place in the fourth chapter. You can explore a new region, Shadowlands, which wasn't available during the first visit to Kashyyyk. Read this page to learn how to get to Shadowlands and how to complete the long climb to the top of a large tree. 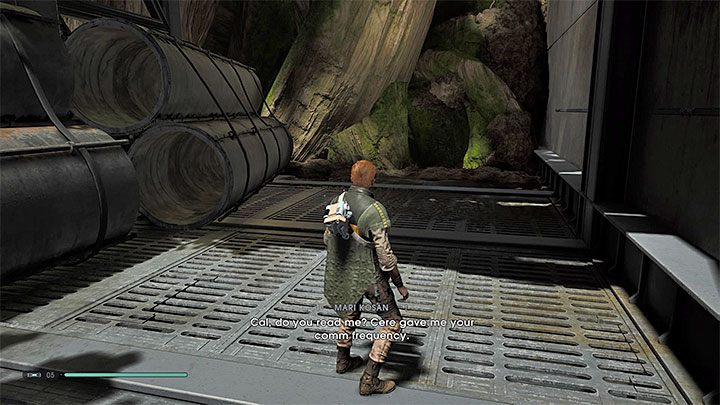 You have to return on Kashyyyk and make use of the skills gained in chapter 3 to unlock access to new areas of the planet. To continue the main storyline, you need to return to the Imperial Refinery. You can choose any path, such as the one going through the roof where the large battle from chapter 3 took place.

Your destination is Overgrown Pass. You can use the path from the above picture or the one on the left - if you chose the latter, expect to fight monsters. 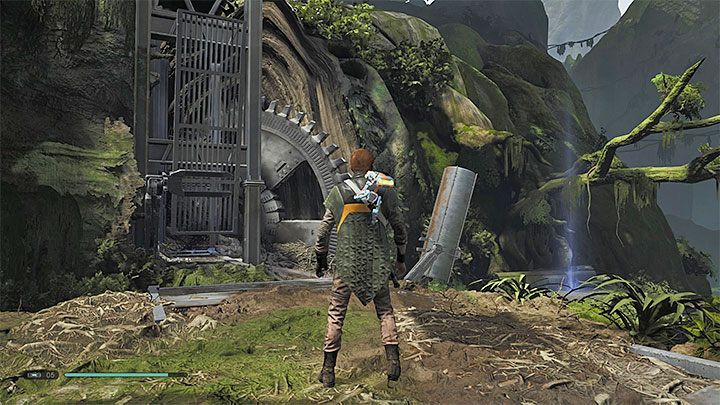 Both paths will take you to the same place - the raised bridge in the Overgrown Pass area (see the picture). You have to use Force Pull to lower the bridge.

Be ready to fight a flying creature called Mykal. Use Force Pull to defeat them easily - they cannot defend themselves against this attack. Go a little further and use Force Push to lower the new structure. A meditation spot is nearby. 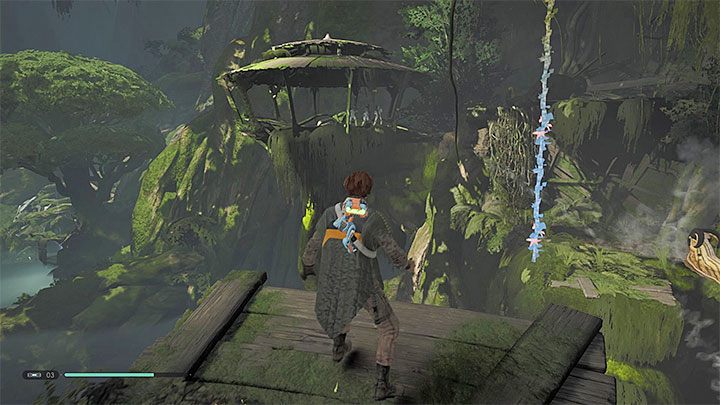 Use Force Pull on the hanging rope. Grab it and swing to jump to the shelf located further. There are several Stormtroopers in the area, but they are easy to defeat and can be pushed into the abyss by using the Force.

Jump off the shelf and slide down. After that, defeat a Stormtrooper carrying a heavy blaster. Defeat the next opponent and get to the panel that can be hacked by BD-1. Once you are outside, head towards the new Stormtroopers. Watch out for enemies with rocket launchers standing on the left watchtower. You can use Force Push on a rocket. It can go back to the enemies and kill them all in a single blast. 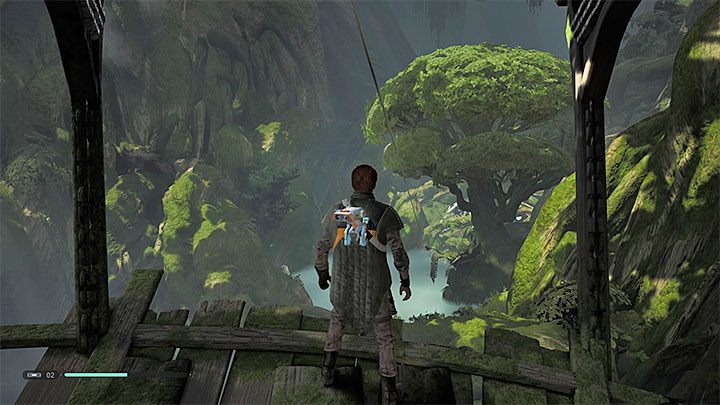 Head to the tower, which was captured by the aforementioned enemies with launchers. Along the way, you need to pull the line towards Cal and climb the wall. Cal can be attacked by a spider - this happens if the monster wasn't defeated by the Stormtroopers.

Once you are in the tower, you can grab the rope and start the long descent (the picture above). Cal will reach a new region - Kyyyalstaad Basin. Of course, a thorough exploration of this location is optional. Let go of the rope - Cal will land in the water. Reach the shore and find a meditation spot. 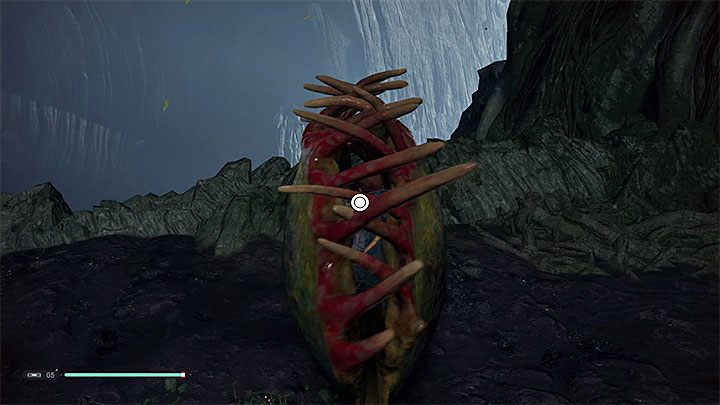 Choose the main path leading to the nearby cave - a few smaller monsters will stand in your way to that place. In the cave, be careful on the Jaw Plants carnivorous. By default, they are "open", but if you stand for a few seconds on any plant, it will "close" its maw (an example in the picture). Cal will take damage and will have to free yourself (press the specified button rapidly). It is worth noting that you don't need to avoid them completely. You can run through them or bounce off them but you need to quickly move away from each of the plants down before it reacts and closes itself.

Another unique danger in the cave is red flowers that slowly come out and tend to drain the health out of the hero. You can't destroy them, but you can ward them off with the lightsaber. In addition, they come out slowly enough that you shouldn't have problems with running past them. 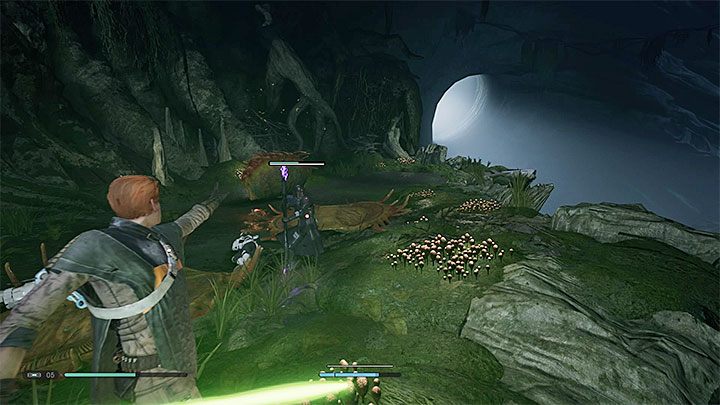 Follow the main path through the cave - it will lead you to the rope. At the top level you will encounter Stormtroopers accompanied by the carnivorous plants. The best solution is to wait for some enemies to be eaten or you can "help them" by pushing them with the Force Push. Leave the Purge Trooper for last. Move away from the plants and then proceed to fight with that enemy. This will reduce the risk of getting Cal trapped by any of the plants.

At some point of your journey, you will come across a large cluster of red flowers. Use the lightsaber to ward off the nearby flowers, and then start climbing - don't stop during this section. Flowers come out slowly and none of them should "catch up" with you. 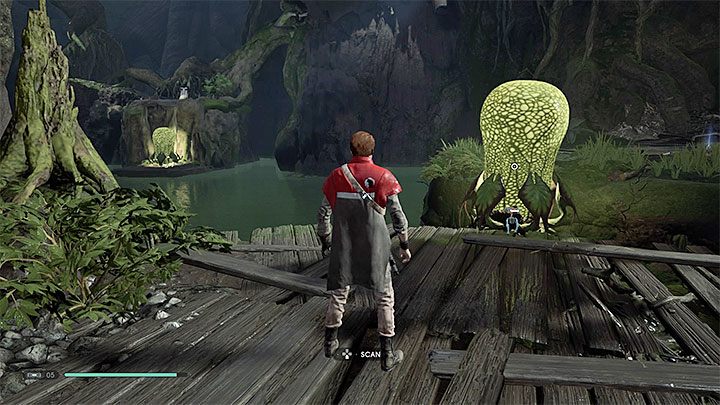 Beware of big monsters - attack them one by one. Also, you can run a lot to make yourself a more difficult target. Get to the place where you can run on the walls. The main character will reach a new big location - Origin Lake.

A meditation spot is on the shore. Swim further and get to the area with two big spiders. Fighting them is optional. Lung Plants, which can catapult the main character, are here. However, they don't deal any damage so they can be treated as a springboard. The first plant of this type is near the area with spiders (the picture above). 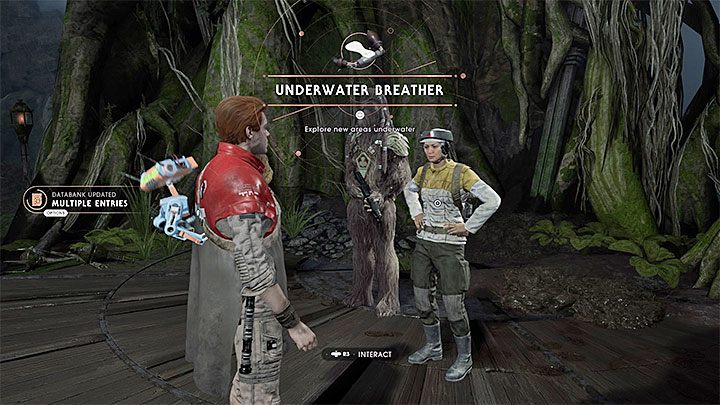 Deal with the monsters and continue the exploration. When you are climbing up, use Force Pull to grab the vines. You have to get to the allies standing on the shelf. Talk to Mari Kosan and chief Tarfful. You get an underwater breathing apparatus that will be useful in reaching the Origin Tree.

Jump into the water. Cal can now dive (hold the Square / X on the controller). Besides following the underwater path, you can also come across new loot chests that were previously unavailable. 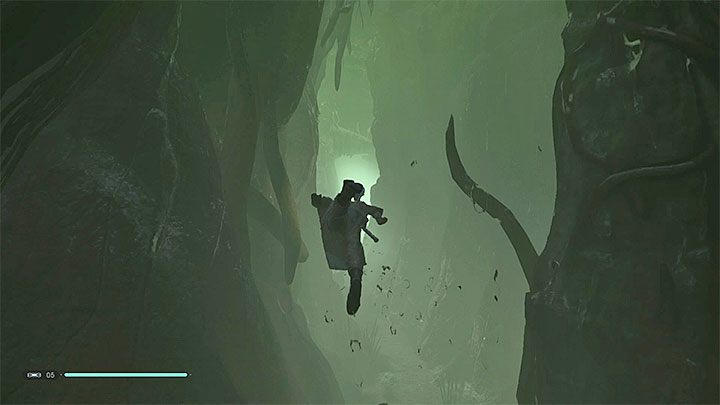 The underwater part of the Region Lake area isn't very extensive, although if you want to move further as soon as possible, focus on crossing the strait. When you get out of the water, you can bounce off a new plant and catch a climbing wall.

At the top, you will see the Stormtroopers fighting monsters, and, as in previous battles of this type, you should try to stand aside and join the battle to finish the remnants off. After eliminating the threat, go straight to reach the Shadowlands region.

Climbing to the top of the big tree 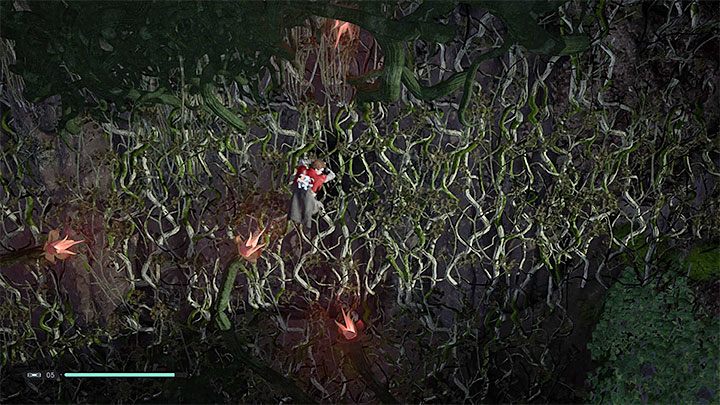 Jump into the small tank, dive and swim to the next location. After leaving the water, you will have to slide down. Jump, catch the climbing wall and start moving to the side. New red flowers will appear - if you don't stop along the way, they won't be able to reach Cal.

Jump from one carnivorous plant to another and remember to avoid staying on any of them for longer. Catch a new wall with vines and escape from red flowers. Repeat this pattern again with the nearby climbing wall. 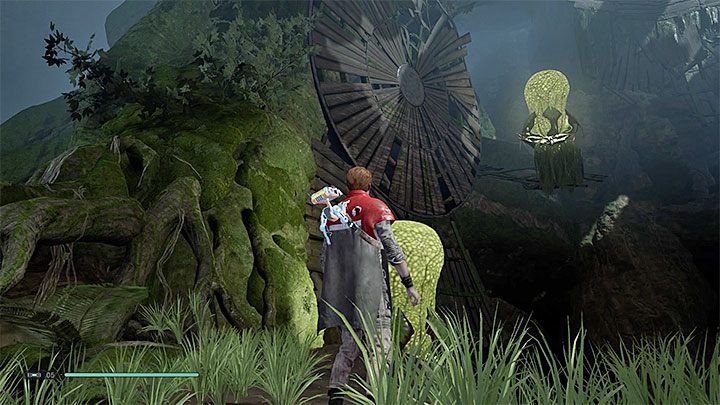 You will get to the location with more Stormtroopers - due to the distance separating you from them, the best way to eliminate them is to deflect their blaster bolts. Use Force Pull on the rope. Use it to jump on the climbing wall.

Climb up a little bit. Climb the rope and get to the meditation spot. The picture above shows a place where you will have to complete a sequence of jumps - do that by bouncing off the plants. There are a few Stormtroopers at the top - among them will be a Purge Trooper wielding an Electrohammer. Leave him for last. When you decide to fight this enemy, take advantage of his slow attacks. Attack him after a failed hit, when he will try to prepare for the next attack. 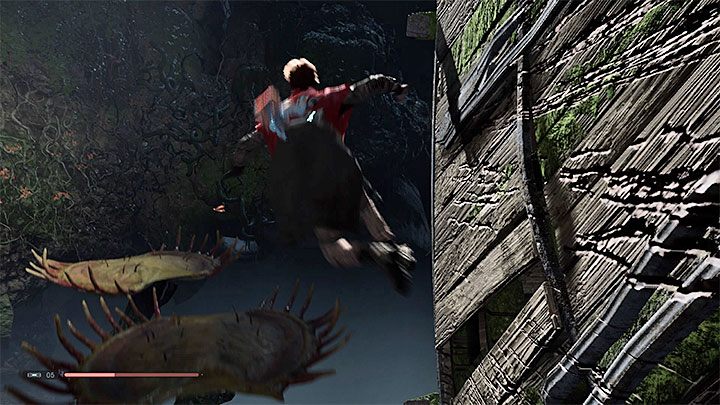 Head towards the cottages located high up in the air. When you reach the last of them, you will encounter the Ninth Sister inside and aircraft. You won't fight here now. However, the Sister will shoot the area. After that, you will have to complete another sliding sequence. Jump to avoid the chasms.

You will find yourself next to several carnivorous plants. You have to reach the subsequent plants - to reach the second in order, you will need to run on the wall. Catch the wall with vines and start running away from the red flowers. You need to let go and complete another sliding sequence. This one is a bit more complicated because you have to bounce off plants and run on walls. 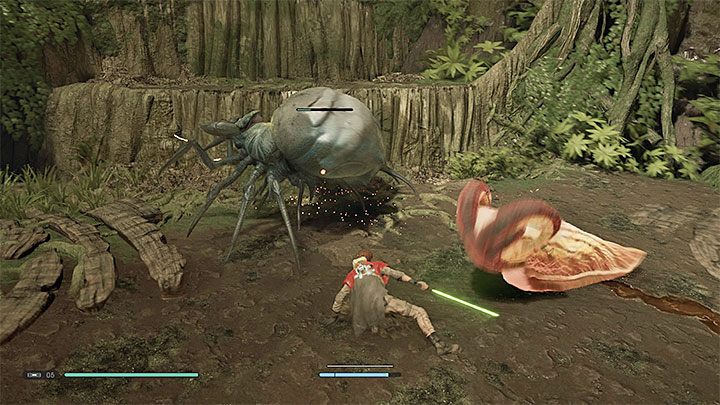 The sequence ends when Cal lands in the water. Swim to the other end of the pond - a new meditation spot is on the shore. A group of monsters is standing on the top shelf. During fights, try to eliminate them one by one. Watch out for their red attacks. It is worth noting that these fights aren't mandatory because you can simply go further. Go through the huge hole located on one of the top levels of this location to reach another area.

On the way, you will need to jump to the climbing wall and run on the side vertical walls. You need to get to the place where Cal will have a flashback. He will learn Jedi Flip, which will be very useful in reaching inaccessible places. 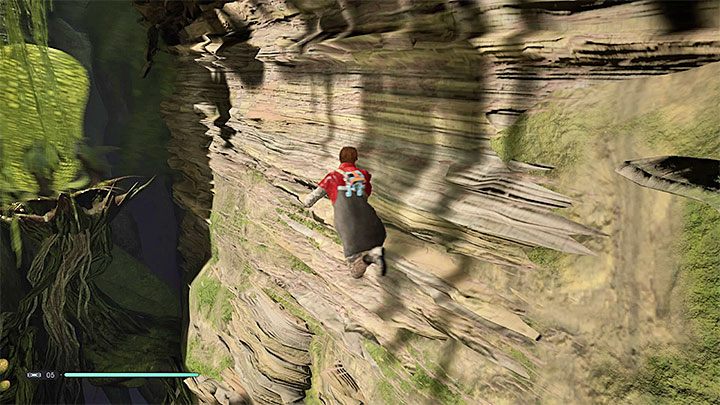 Double jumps are easy to perform - you have to press the same button again during the jump. You use this skill to jump to the top shelves. This will allow you to get to the meditation spot (you can now purchase new skills).

In the place where the rope hangs, you can check out another use for double jumps - they allow you to jump to ropes running walls, climbing walls and other similar elements of the environment that are located farther. Don't forget that Force Pull can be used during a flight, not just when you are standing on the ground. 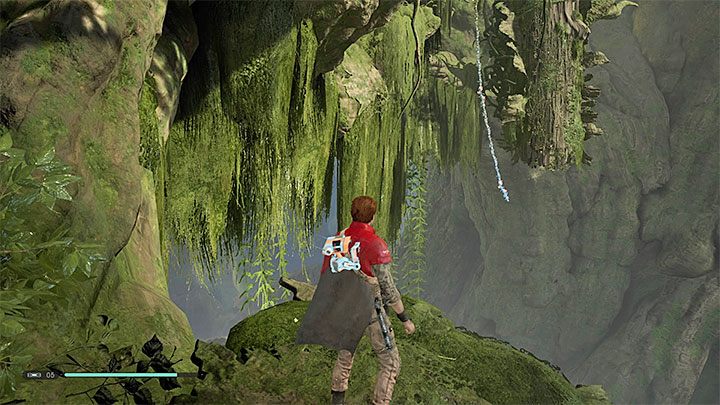 Reach the glade and prepare for another confrontation with Mykal creatures. As before, the best tactic is to use Force Pull to easily kill them with the lightsaber.

Grab the rope and start climbing it. Be careful when you are going on the branches of the big tree - you can make a mistake and fall into the abyss. More climbing ahead. Use Force Pull on the hanging ropes and, if necessary, make use of double jumps. The linear climbing sequence will take you to the next meditation spot. 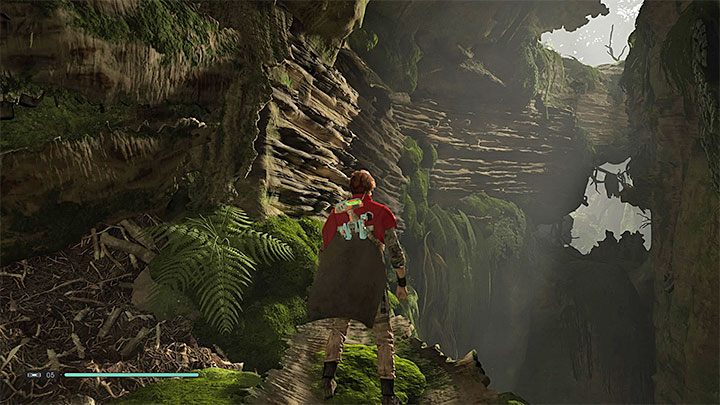 The picture above shows the place where you have to run on several walls in a row. Use double jump at the end of each wall to reach the next one. Thanks to this, Cal won't run downwards or fail this sequence.

After a few minutes, you will reach the nest of Shyyyo bird - the animal is injured. Watch the cut-scene during which the bird will be healed. 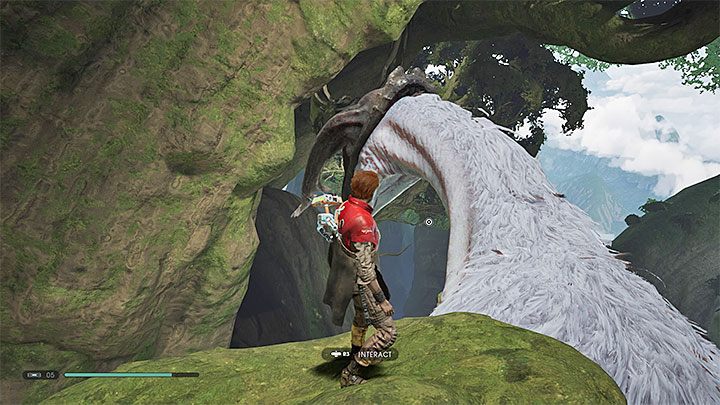 Go to the end of the large branch and press the interaction button to climb the Shyyyo's ridge. The hero will fly to a new location. The confrontation with the Ninth Sister is nigh - the description of that duel is on the next page.