On this page of our guide to Star Wars Jedi: Fallen Order you will find a detailed description of the visit on the planet Zeffo which takes places in the second chapter of game. On this page of our walkthrough we have described only the route to the Tomb of Eilram. Along the way Cal will have to solve puzzles, jump on platforms, fight with monsters, and defeat various types of Stormtroopers. 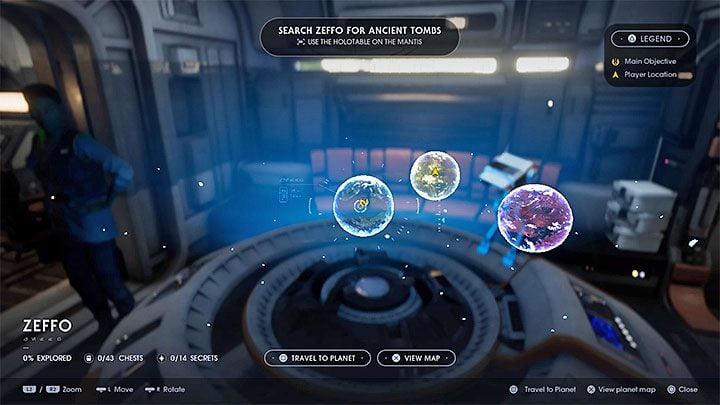 The main character will return to the Mantis spaceship - after all things have been done on Bogano. Several optional activities have been unlocked on board, but the only mandatory step is to interact with the map of galaxy. Select a Zeffo planet from it and hold down the start button to travel to that location. Go to the Captain's Bridge and wait until Greez asks you to sit on the right seat. A cutscene will be displayed which depicts the landing on Zeffo.

The planet Dathomir is also visible on the map of the galaxy, but it's not required to explore it at this particular moment of the game's story. Furthermore, it wouldn't be advisable, because opponents on Dathomir are very strong and hard to defeat. The best option is to wait and travel to this planet in later parts of the main campaign.

Passing through the village 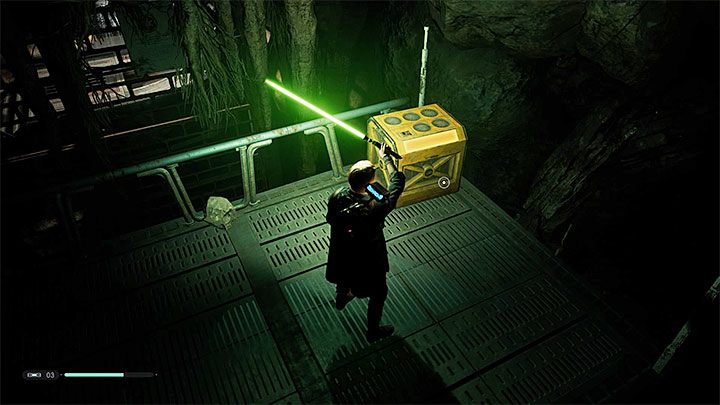 Select the side mountain path adjacent to the landing zone. When you walk over a narrow beam, you will encounter Scazz monsters, although eliminating them shouldn't cause much trouble. Along the way, it is worth looking for a side entrance to an unlit cave. Checking it is purely optional, but you can easily find Stem's chest and get a canister that increases the number of BD-1 treatments by 1.

Ultimately, you must select a path that leads to the hill. There, you will find first Stormtroopers. Remember that in the case of enemies using blasters, the best tactic is to deflect the bullets with a lightsaber. 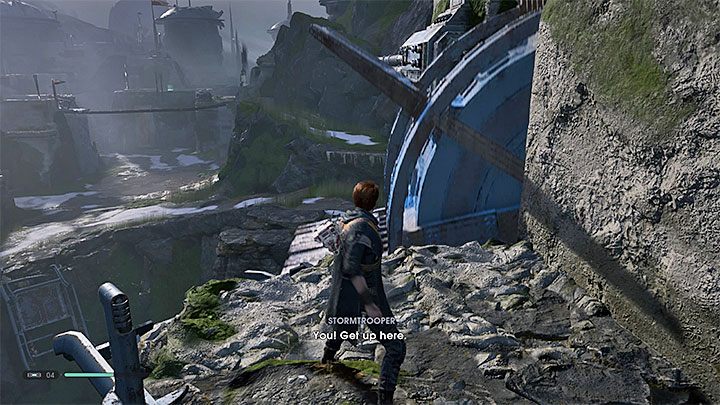 Finally, you will reach the Abandoned Village. The water mill is an obstacle on the way to the village, but this machinery will help you to get to the other side. Use the force slowdown power on it so you can jump on one of the blades.

In the village you will take part in numerous battles against Stormtroopers. It's best to start by deflecting projectiles of distant enemies and get rid of them pretty easily. The best tactic when battling Stormtroopers equipped with electric batons is to parry their attacks. 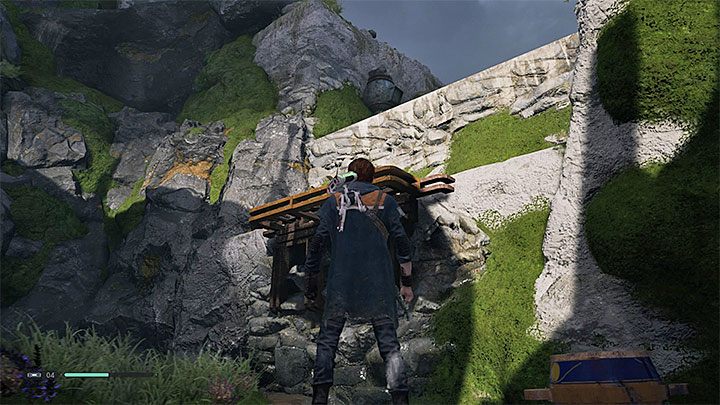 You can't choose the shortest way through the village, as there is a raised metal bridge at the end of it. You can't descent the bridge at the current stage of the game. Look for the orange edge on the right side that you can grasp and get to the roof of one of the buildings.

In the area you will encounter new Stormtroopers with blasters. Try to deflect their laser bolts with your lightsaber, just as always. Walk over the pipe connecting the buildings and jump to the roof of the next building. A few more jumps will get you out of the village. Jump over the nearest Stormtrooper. Then turn left and reach the meditation point.

Journey to the ruins 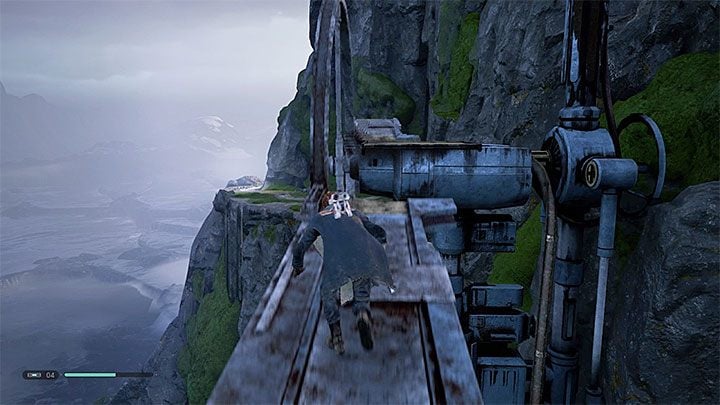 You have to go through the cave and once again it is useful to light the area with a lightsaber. Select the path leading straight ahead. Along the way you will find a switch. Use it to illuminate the cave.

Once you get outside, watch out for new monsters. Move towards the rotating mechanism that runs in high speed. Use the slowdown force power to 'create' a horizontal bridge to run across. 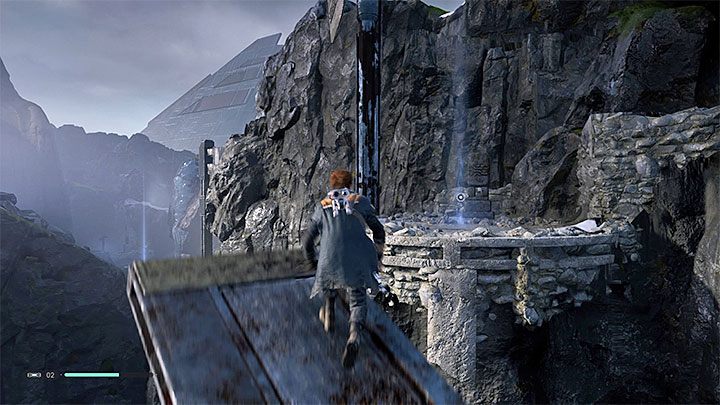 In one of the following areas there is a new large group of Stormtroopers, although they can be attacked by surprise. Watch out for the first Stormtrooper with a rocket launcher. Do not try to bounce or block fired rockets, although you can slow them down with the Force. Avoid heavy fire and try to shorten the distance to the Stormtrooper to kill him as he reloads his weapon.

The next section assumes reusing the slowdown Force power in order to run through horizontal platforms. On one of the platforms you can stop it when it is in an inclined position, which would allow you to reach the meditation point shown in the picture. You might as well ignore this point and get to the opposite end of this section faster. 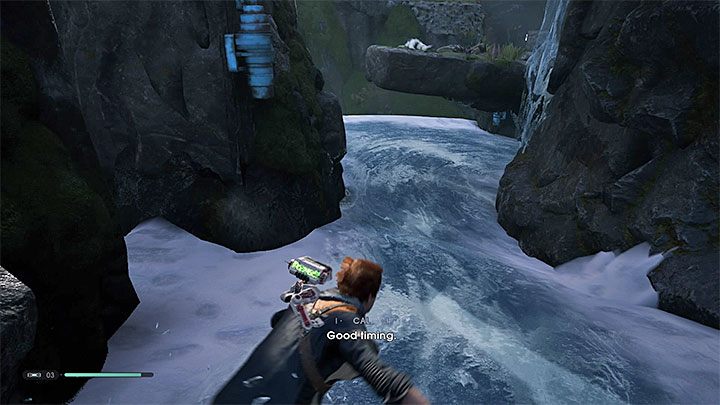 Ultimately, you will reach a new location guarded by the Stormtroopers. Deal with them and reach a place where you can start sliding down an icy path. Sliding down from the icy path requires a lot of effort to avoid falling into the abyss - you have to turn sideways or jump when necessary.

You'll be in front of a hanging rope. Jump to it, swing and land on the far rock shelf. Run up over the vertical wall. Head towards a hill occupied by the Stormtroopers and eliminate them all. There will be a commander among them, who is better at melee combat and is able to parry some of your attacks, among other things. It is worth to help yourself by Force slow power in order to perfectly parry his strikes. 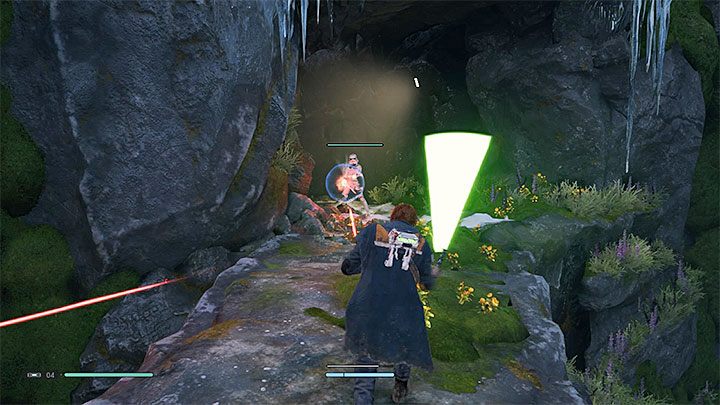 Run along the new wall leading to the meditation point. Select the bridge leading towards Heavy Assault Trooper. Do not try to deflect his series of projectiles, but run towards him with the block button held down. Attack your opponent with a lightsaber when you're next to him. A little further you'll meet another type of opponent. In this case, also run along a narrow metal beam while blocking the incoming missiles.

Further crossing involves climbing a rope and moving through by using a pipe. You will have to hang on it in order to avoid the tanks blocking your way through. Reach a new place where you have to slide down through an icy path. 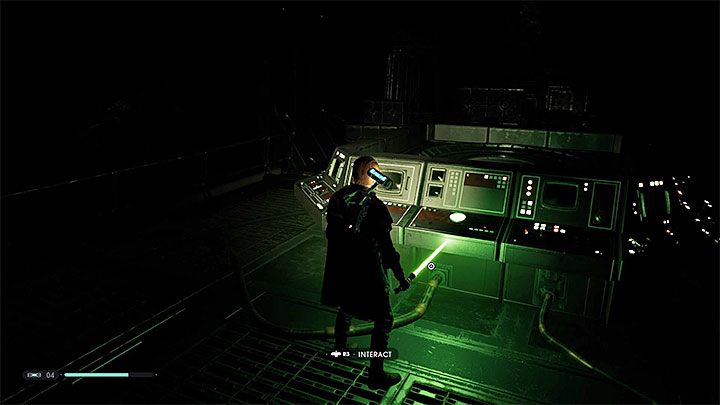 Watch out for a new opponent with a rocket launcher. After you've dealt with him, enter an unlit building. In one of the rooms there is an interactive terminal. After you use it a hologram will be activated.

Watch out for the next commander. You will meet him when you go out on the metal balcony. After the battle, turn right. You have to pass a short ice downhill slide and make a flawless jump towards the hanging rope. It's easy to make a mistake here, so make sure you plan the moment of your descent and turn towards the rope before you make a jump. Swing on the rope and jump to a new rock shelf. 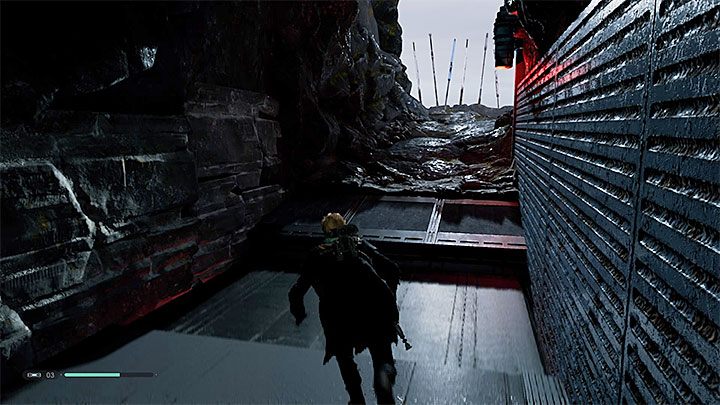 You will be in a location with moving blocks that can crush Cal. It is worth using the Force slow here and thus provide more time to move to the next safe point. In the case of the last block you have to slow it down when it withdraws in order to climb on it (picture above).

Follow the narrow mountain path and reach the meditation point. Two ropes were hung over the precipice. When you catch the first one, make sure you turn perfectly towards the other rope. Only then swing and make a jump that should result in a successful catch. 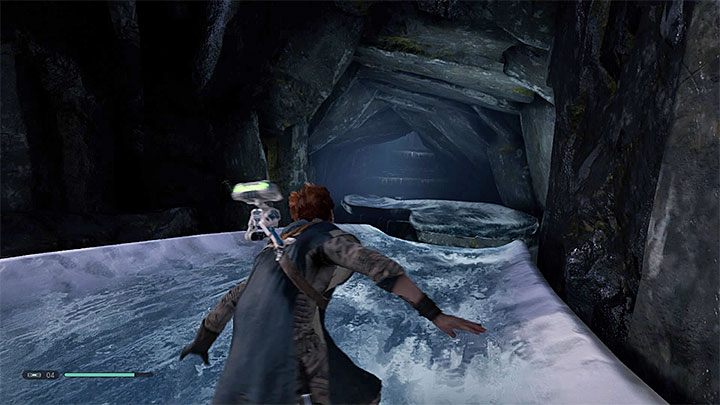 Eliminate the new Stormtroopers and jump to the next hanging rope. A longer descent on icy ground sequence will begin. Again, you have to make sure you don't fall into the abyss on the way. The more difficult moments of the descent are jumping into a hanging rope and jumping over the abysses, which have to be initiated at the last possible moment.

The next part of the crossing involves frequent running on the walls. Beware of the monster lurking in one of the darker rooms. The path will take you to the stairs leading to the Windswept Ruins.

Finding the entrance to the Eilram's Tomb 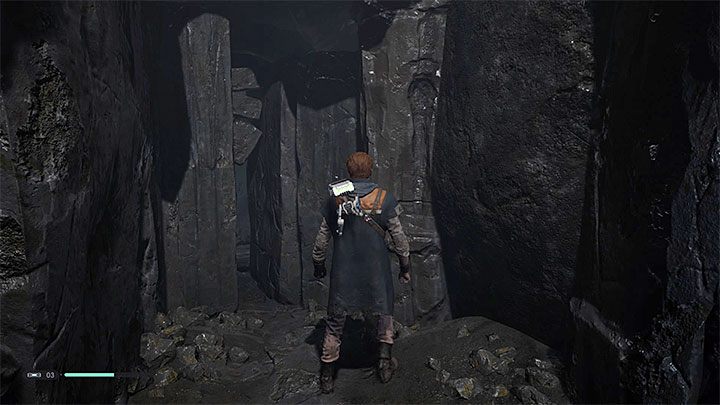 Full exploration of the ruins is not required and would be impossible due to lack of appropriate skills. You'll meet new monsters here - Phillak. They are easier to avoid than other enemy creatures because of their poor eyesight. In case of direct confrontation, lock your camera on the monster and jump whenever it starts a "red charge".

The exit from the ruins is at the opposite end of this location. You have to squeeze in between the rocks. 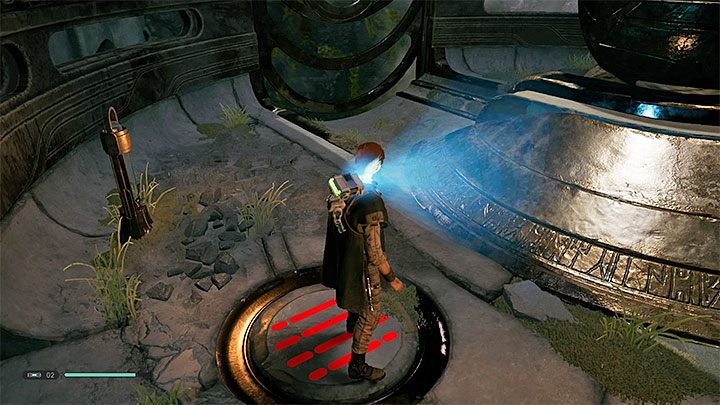 Head towards a large structure visible in the distance. Around it there is a raging wind (it is the so-called eye of the storm) and your attempt to reach the central facility will result in a clash with one of them. Use Force slow to stop flying objects and run fast to the middle structure.

Stand on the pressure plate shown in the image. It will turn red. Then, you will be transported to the Tomb of Eilram.