Tombs are one of the activities available in the Star Wars Jedi Fallen Order game. You will see the first tomb on the planet of Zeffo.

You will need to complete it to receive further story missions. 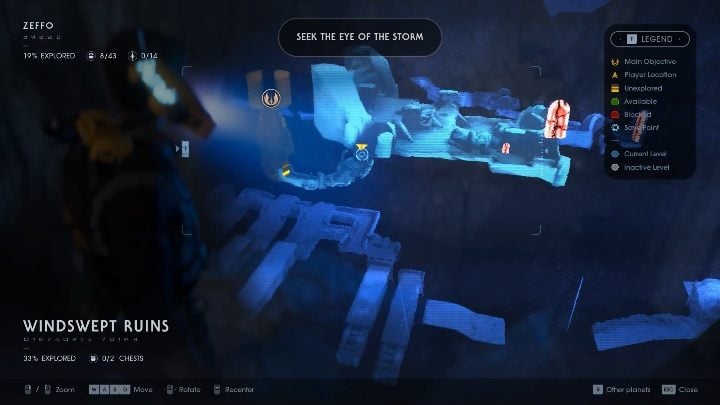 The entrance to Tomb of Eilram is from Windswep Ruins. Looking at the map, you will see plot marking of the entrance. 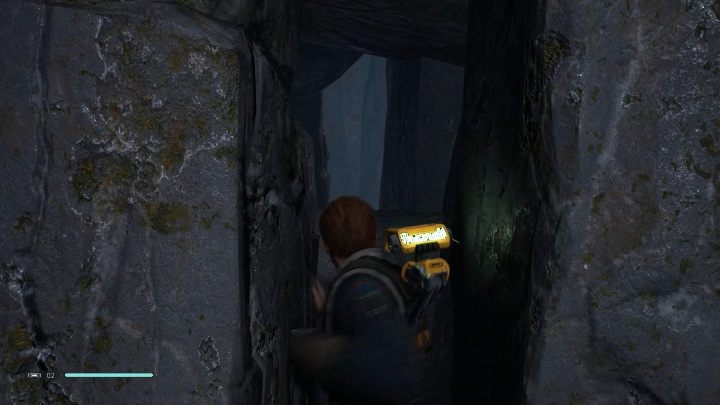 Narrow roads lead to the tomb, mainly those that involve squeezing between the rocks. 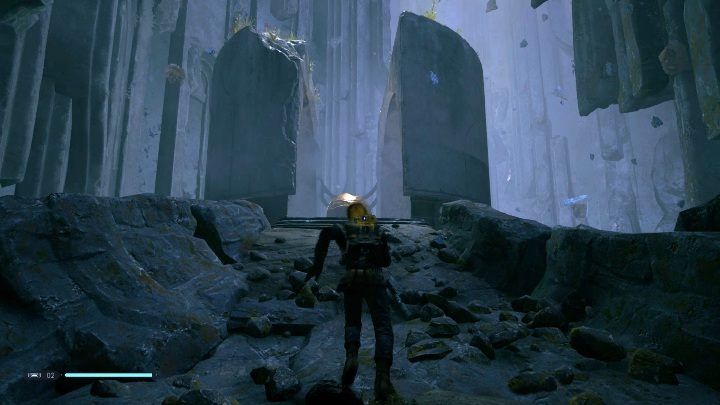 You will encounter the first trap at the entrance. There are flying rocks around the area you need to get to. Stop them for a moment to be able to pass safely. 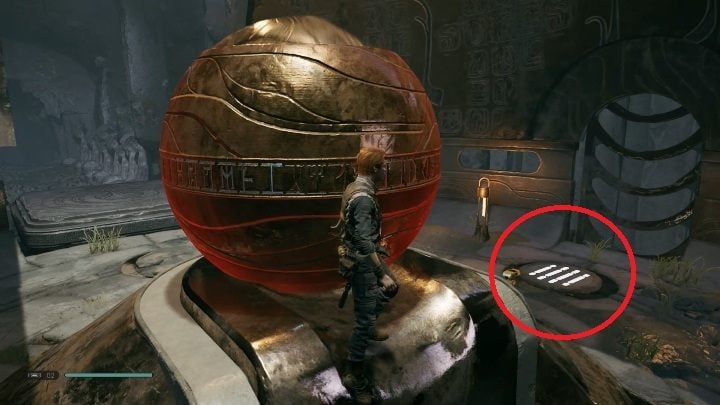 To start the elevator that will lead you to the tomb, you need to activate the mechanism. All you have to do is to stand in the place marked in the screen above. 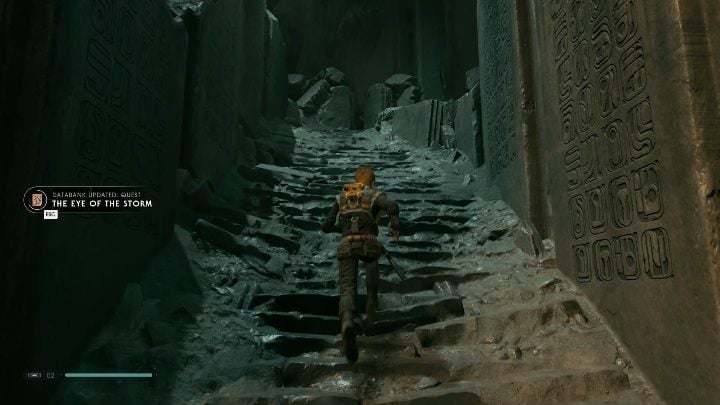 To go further, you need to climb the stairs and squeeze through the narrow passages. Thanks to that, you will get to the deeper parts of the tomb. 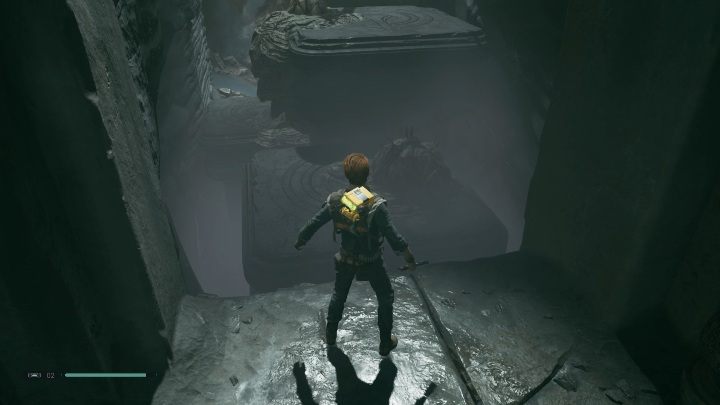 As you explore the tomb, be wary of exploding enemies. You cannot destroy them, you just have to avoid them. 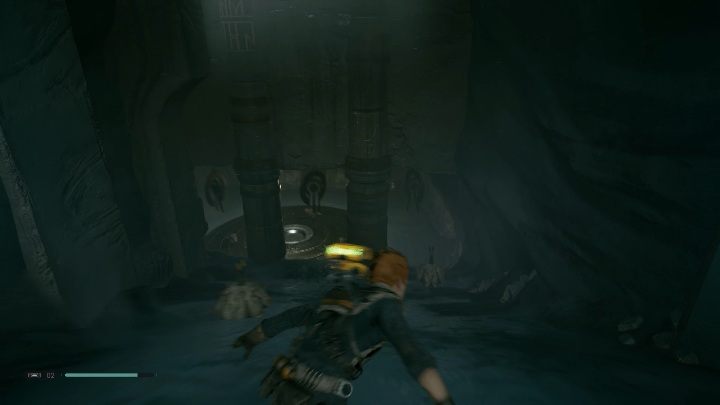 To go further, you need to jump on the rocks and slide down the icy terrain. 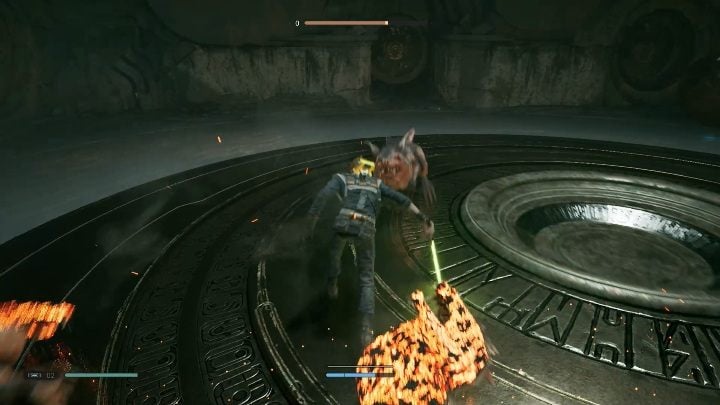 When you reach the next level of the tomb, the enemies will attack you. Kill them at once. 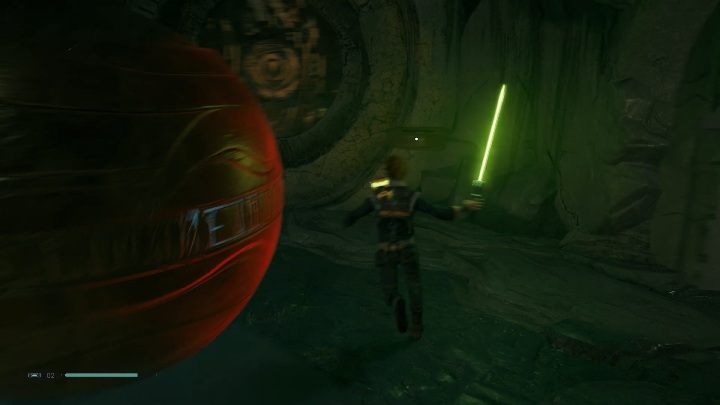 To go further, you must place the ball in the center of the room, in a specially designated place. In order to do this, you need to activate all the tunnels that create the wind. All you have to do is interact with the mechanisms shown in the screenshot. 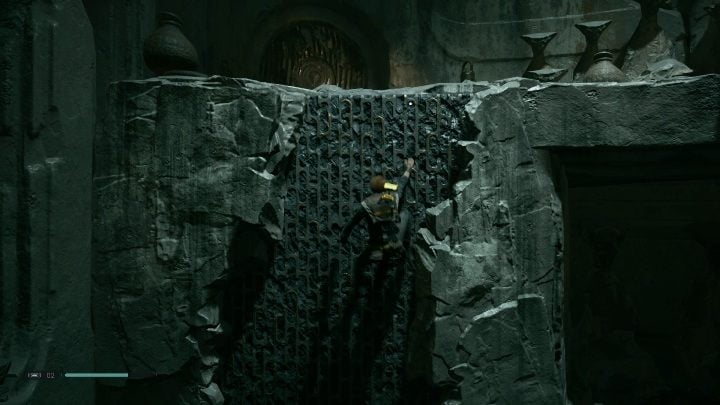 When you reach the next room, you have to go up to the top floor. 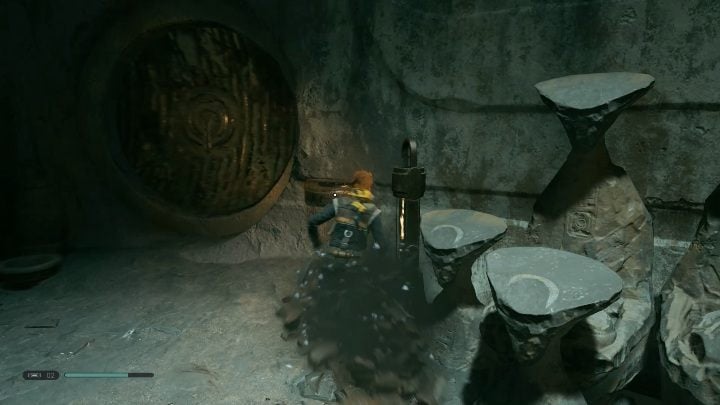 Start the mechanism again. This time it will cause the part you need to go through to start moving. Close the tunnel at once, otherwise you won't be able to cross to the other side. 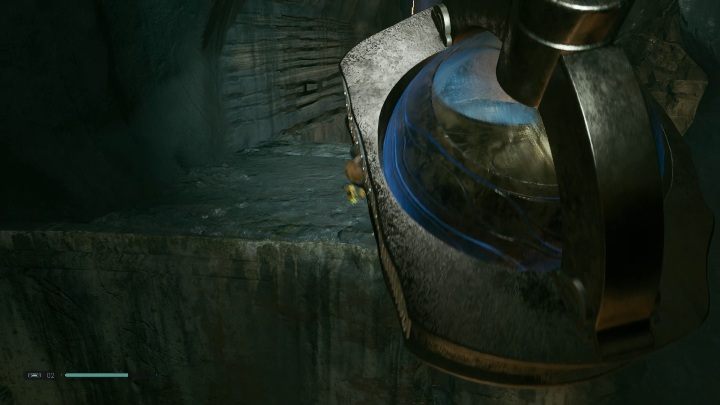 When the part starts swinging, you have to grab it and jump to the other side. 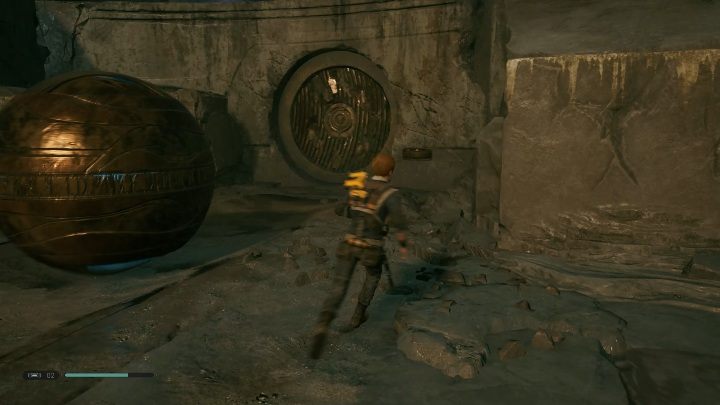 You'll find another puzzle associated with a ball. It is exactly the same, you only need to start the air stream so that the ball moves to a specific place. 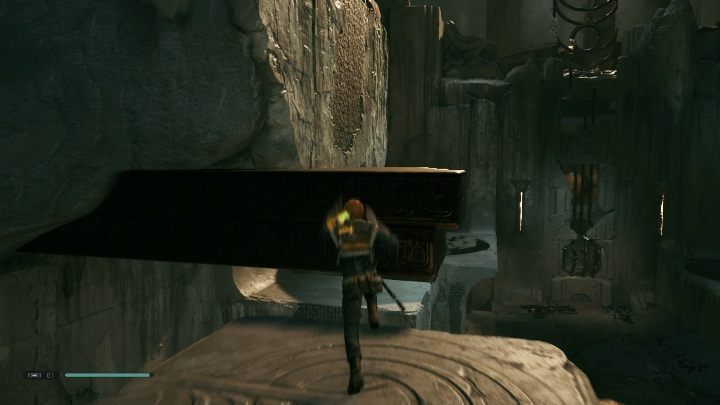 The ball will open another passageway. Go through them to the next part of the tomb. 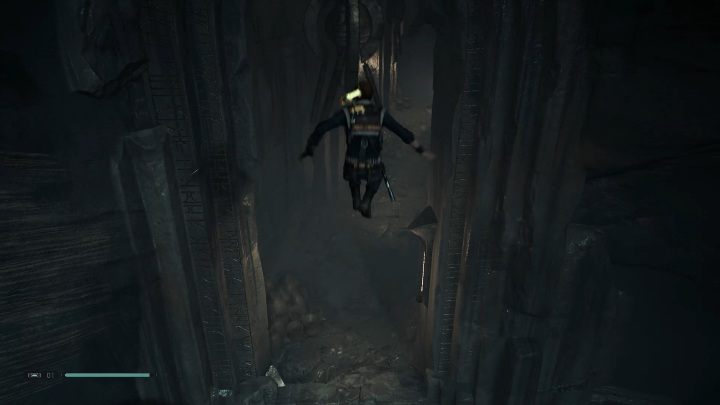 You need to start the airflow again. It will not only help you take out your enemies but also to jump to the other side. 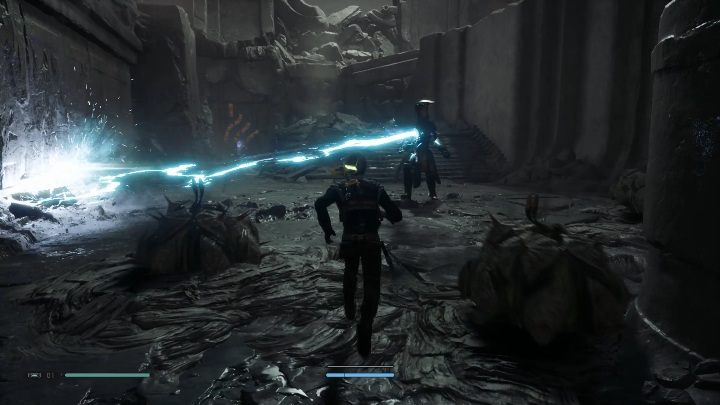 When you enter the other room, you will stumble upon a Guardian. You have to kill him to get further. The main blow of the enemy is a stream that deals damage to everyone around. Try to avoid this flow, otherwise it will put you off balance and make it difficult to deal damage. 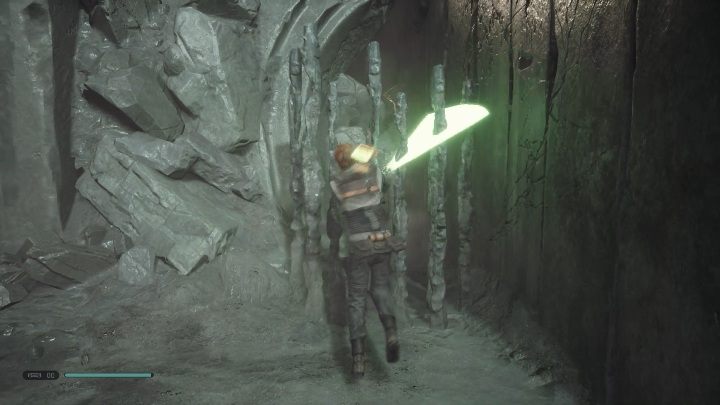 You must open the passage yourself. All you have to do is smash the obstacle with your lightsaber and sneak into the next room. 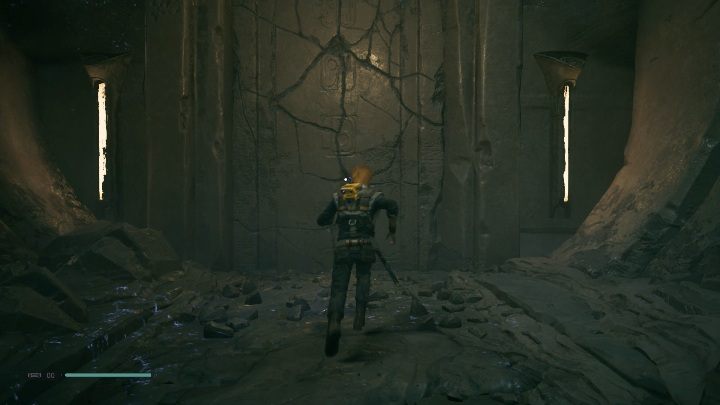 The most important point to get in the tomb is the cracked wall. There you will receive a second force power, Push. Thanks to it you will move and act quicker, both in combat and during exploration. 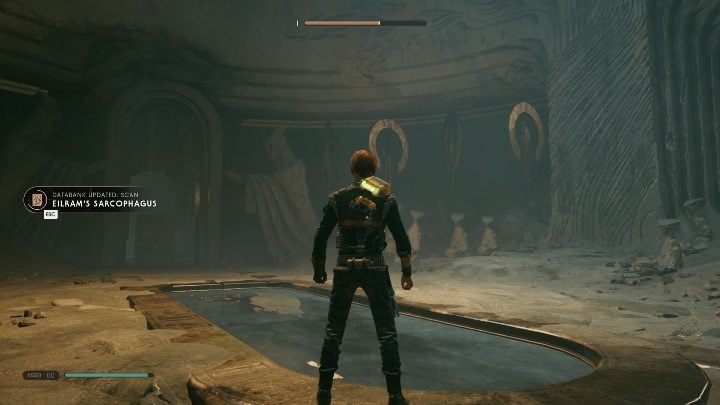 From now on, you can mess up / move all the walls / objects that shine in blue. Thus, you can get quite a lot of items previously unavailable in the game.

However, your task is to get to the main section of the tomb. All you have to do is to destroy the biggest cracked doors. 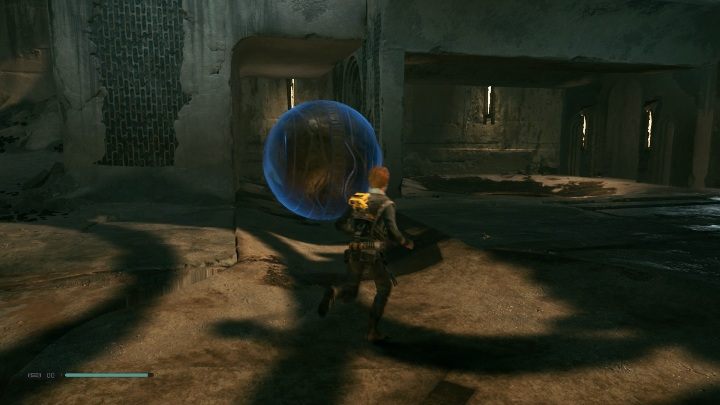 Remove the ball that was installed earlier and install it in the next point. The location is shown in the above screenshot. 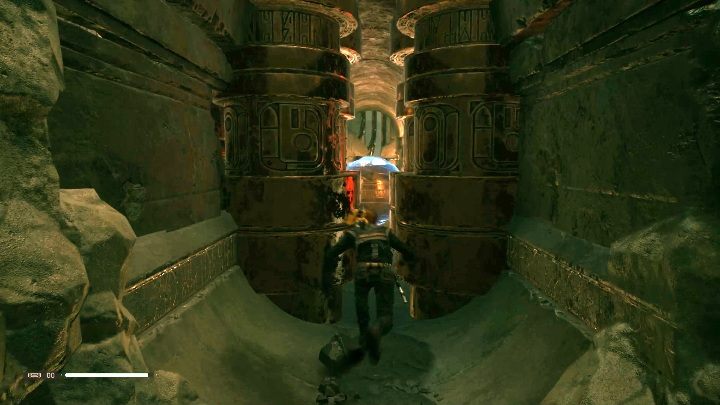 Another ball is on the highest level of the tomb. Climb the wall and drop the ball to the lower floor. Now just install it in a special section and you will finish the next puzzle. 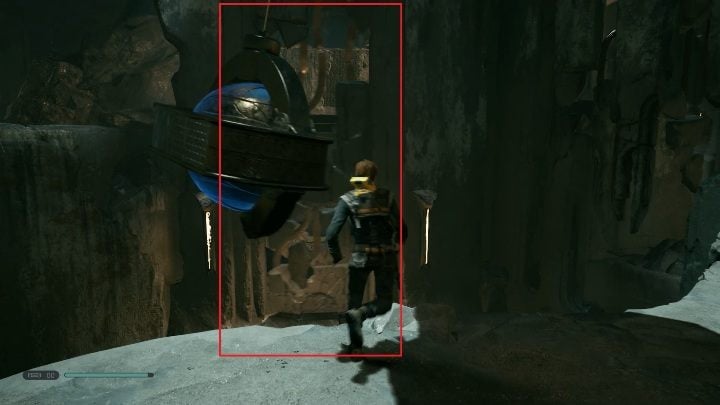 Go back to the location with the hanging mechanism. With the help of Push, crash it into the broken wall. 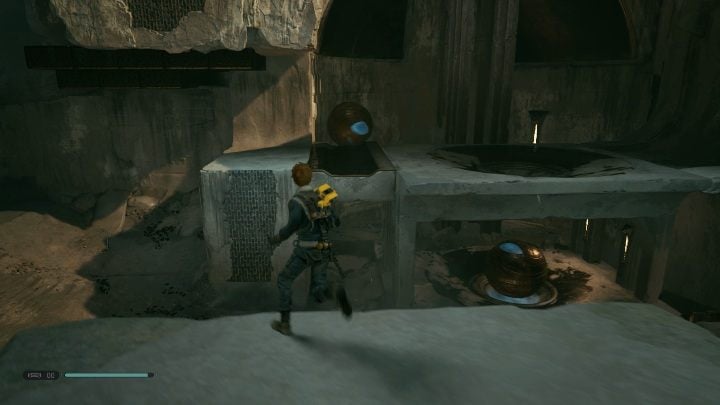 Again, place the ball at a specific point so that you can continue exploring. 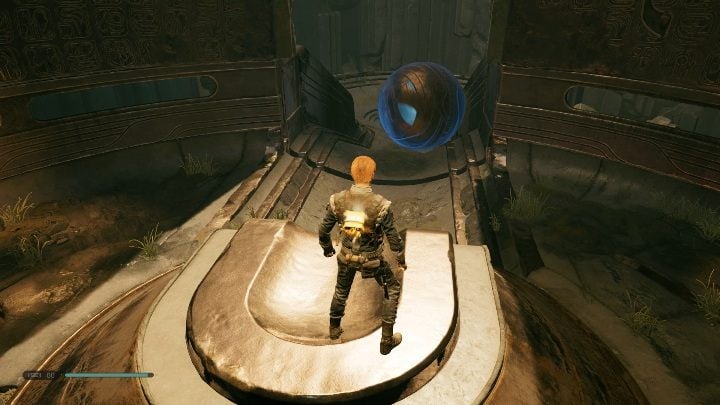 The last ball must be knocked out of the elevator - this in turn will allow you to move to the exit. Thus you will come out of the tomb.