The world of "Clear Sky" is a home to six main fractions - Duty, Freedom, Stalkers, Military, Bandits and Renegades. If you want to find out more on how to win battles for each fraction, check the description for the Swamps area. You should know that the power of each fraction changes in realtime. It can depend on a lot of elements and obviously you'll be allowed to play a major role in leading your fraction to victory or destroying a hostile organization. The key to success is to attack the members of a fraction you're fighting with and to prevent your allies from dying too often at the same time.

As for the differences between the fractions, two of them are going to be hostile towards you when you start the game. I'm talking about the Renegades and the Military. This means you're going to be shot without receiving any warnings, so you have to be careful on how you'll decide to play things out. It's a little better with the Bandits, however you must remember that soldiers of this organization will decide to mug you whenever they have an opportunity to do so. Nevertheless, if you're skilled (and stubborn) enough, you may be able to join them (their main outpost is located in Garbage). I wouldn't recommend doing it if this is your first time with the game, because Stalkers will automatically become your foes and it can make your progress more difficult.

As for three remaining fractions, they should be friendly towards you by default, however you'll still have to perform a large number of tasks for them to prove that you're useful. You should also know that many of the main quests are tied to these three fractions, so you should be careful while going to war with one of them. If you've played the first game then you should know that Duty and Freedom are hostile towards each other. If you decide to become a member of one of these fractions, you'll probably become an enemy of the other one. Freedom in my opinion is stronger here, because it controls a larger number of territories. 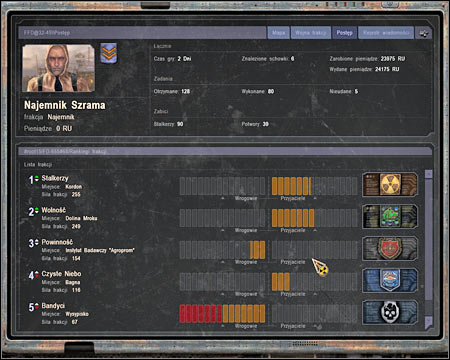 Your PDA can display a lot of information about the fractions, including their actual strength.