I've already mentioned that this is a very difficult game, especially for less experienced players. It's mostly because enemy units are VERY smart. You will have to remember about it from the beginning. First of all, I wouldn't recommend going after larger groups of enemy units (more than 3-4 soldiers or 2-3 monsters). The only exception is when you have a huge technological advantage over your enemies. It may happen later during the game, once you've collected better guns and armors and you're instructed to go back to Cordon, Garbage or Agroprom. Other than that, you shouldn't change anything in your approach. It's also very important to surprise your enemies. This will allow you to win most of the difficult fights, especially if you have a lot of grenades and powerful weapons at your disposal. Doing this is especially effective during the night. Most of the enemy soldiers won't be using nightvision goggles. They will only have simple flashlights. This will allow you to plan your moves more carefully. When you try to kill enemy soldiers, you must be aiming at their heads, especially if it's a larger distance. Try choosing single shots, instead of longer bursts. One accurate shot will be more than enough to take down an opponent. If it's a smaller distance, you won't have to aim at the head, mostly because it's very important to take down such an opponent as soon as possible. You should consider using shotguns during these fights. Most of the enemy soldiers will be carrying machine guns and shotguns, however you will also come across some snipers (screen). Sadly, it's very difficult to spot and eliminate them without receiving any major injuries. It's very important that you're using a decent gun, so you won't have to worry about the accuracy too much. A scope will also provide a much needed help. You should be using nearby objects for cover, especially if you haven't located all enemy units. I guess I should also tell you about the importance of using grenades, especially while trying to explore buildings or underground structures. If you throw the grenade correctly, you will be able to take down several opponents without having to worry about anything else. Grenade are also very useful to take down soldiers who are standing just around the corner. That way you won't have to lean out. You will be dealing with well-armed units later during the game. Make sure that you go only for headshots here, even if there's a smaller distance separating you from each other. 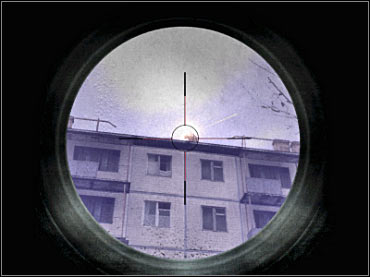 It's very difficult to detect most of the snipers. You can't ignore them by running to your current destination, because you would have probably ended up dead.
See/Add Comments
JOIN FOR UPDATES