"S.T.A.L.K.E.R." is a very tough game to beat, even if you're playing on lower difficulty levels. I will do my best to tell you about a lot of important things. Some of these hints will probably seem to be quite obvious, however the game offers a more realistic approach. You will also find out about new things and you wouldn't find them in popular FPP titles. First of all, you will have to remember that your main character isn't immortal. It's very easy to die during the game, even if you've chosen a lower difficulty level. You won't be able to take on more than a few bullets, even if you're carrying a powerful armor. Additionally, you will witness deadly headshots. If one of the enemies manages to shoot you in the head, you will probably die right away. The same goes with melee battles. Most of the mutants are going to kill you with only one swing. The first part of the game is by far the most difficult one, mostly because you won't have any real armors at your disposal. The same goes with artifacts. You will be able to find some artifacts in Cordon and Garbage, however only a few of them will prove to be useful (for example - they will extend your life meter). The next important thing is planning your moves. You will have to observe your surroundings, so you won't end up near a large group of enemy soldiers or wild animals. As for the smaller distances, you must watch out for deadly anomalies and radioactive zones. As a result, I wouldn't recommend moving too fast, even if you think you know the surrounding areas quite well. Remember to use the binoculars to spot enemy soldiers and different types of monsters. You will also have an opportunity to attach scopes to some of your weapons. This is a very useful tool, even if you don't plan on using the weapon at the same time. Also, remember that you won't have to kill all enemy units in order to succeed. Sometimes it's better to avoid them, especially if you're wounded. You should also know that you won't receive any rewards for winning most of these fights. 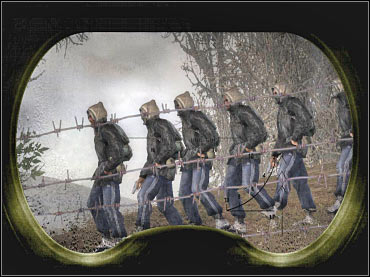 If you come across a larger group of soldiers or monsters, consider avoiding it. Attack your enemies only if you plan on picking up additional equipment or if you have to explore this particular area of the map.

If you decide to start a battle, don't forget about the possibility of taking additional supplies. Each body (including the monsters) can be searched. In most cases, you will find ammunition, food, grenades, first aid kids, anti-radiation tools, pistols and artifacts. You should also know that you won't find any bigger guns in the inventory. You will have to look for them near the bodies. Performing these action will allow you not only to resupply but you will also acquire new things to sell to the traders. You can also be informed (after opening the inventory window) that you've discovered a personal stash of a killed Stalker. You would have to open your map in order to find these stashes. They are going to be small purple points. I'm sure that you won't have any problems finding them (#1). Once you've located a stash, you will have to reach that location (#2) in order to be able to open it. You will be able to find precious objects inside - rare artifacts, better guns and grenades or even unique armors. Sadly, it's going to be very difficult to reach most of the stashes, so you must have that in mind. The most common problems are: buildings (in order to reach a stash you will probably have to go to a roof of a certain structure or into the sewers), radiation (you will probably have to enter a radioactive zone in order to open the stash), anomalies (you should be able to avoid them, however more traps may still be around) and monsters (mostly wild dogs, boars and wolves). You should also know that once you've collected all objects from the stash, it may be refilled later during the game (after you've killed another Stalker). As a result, you should consider going back to these objects once you've returned to a previously explored sector of the map.

Stashes aren't the only places where you will be able to find precious or unique objects. You should also be on a look out for crates, lockers, chests and well hidden rooms. If you plan on exploring the entire map, make sure that you have checked all bushes, lakes and buildings (especially roofs and other areas which are hard to get to). This will allow you to acquire valuable and/or useful equipment. Sadly, all of these objects have a certain weight and you will have to remember about this specific parameter. You will have to open your inventory in order to find out what's the current weight of all of these objects (including personal armor). It will be displayed in the left side of the screen. I'd strongly recommend that you NEVER exceed 50 kilogrammes. Otherwise you would have some serious problems exploring your surroundings, mostly because the endurance bar would have been depleted very quickly. As a result, you wouldn't be able to run and in some rare cases even moving would be a huge problem. You can get rid of unwanted objects by throwing them out of your inventory, however I wouldn't recommend doing that, because you wouldn't make any profits out of it. It's much better to go to one of three main traders of the game. Sadly, this sometimes means that you would have to go back to a previous zone. Nevertheless, I would recommend that you do this, especially if you plan on buying new objects. It's very wise to sell artifacts. They don't weigh too much and you'll receive a lot of money for each artifact (1000-5000 RU). You could also sell guns and armors, however each of these objects weighs at least 10-20kg. You will be able to buy certain things from the traders, however you won't find many interesting objects in their stock. You will probably want to buy some ammunition and you should be able to find all needed objects directly on the battlefield. 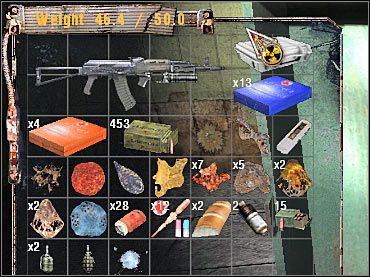 It's very important that you don't carry too many objects in the inventory. Otherwise you wouldn't be able to use the sprint button too often.

There are also some obvious things and I guess I should remind you about their importance. Due to the fact that the game is very difficult (even in the first sector of the map) you should be thinking about saving a lot. I wouldn't recommend using only the quicksave key, mostly because you will probably save the game in a dangerous area more than once. Additionally, your new savegames may become corrupted. As a result, try using at least 8-10 different slots. Save your game each time you've finished exploring a larger section of the map and you plan on going to the next one. The same goes with more difficult fights. If you open the minimap window, you may find out the exact time of the day. You will be able to explore maps both during the day and night. It doesn't really has a huge affect on the gameplay, however it's going to be easier to ambush enemy units or to avoid them once it's dark outside, mostly because some of the enemies will only be using small flashlights. I should also remind you about your PDA. You were instructed how to use it during the tutorial session. The PDA offers a very useful minimap. You will also find a quest diary here, various statistics and an encyclopedia. Be sure to check the first chapter of my guide if you want to find out more about some of the basics of the game.