This location is tied directly to one of the main quests of the game. If you've already visited the Wish Granter, you won't even be allowed to visit this area. Once again, you will be dealing with a lot of well equipped enemy soldiers. Don't forget about the possibility of saving your current progress. Also, check bodies of fallen enemy units for ammo and better guns. 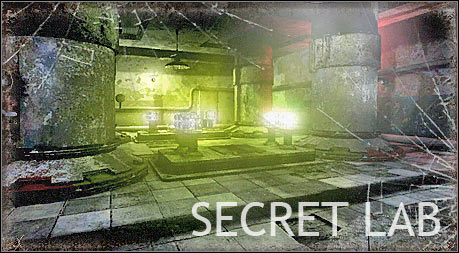 This is the only main quest for this location, so you won't have to worry about anything else. Start off by moving forward. You will have to stop once you've reached a small junction (#1). This is a very challenging section of the map, mostly because you are going to be attacked from THREE different directions. Thankfully, there are some bars in front of you and to the right, so you won't have to worry about enemy soldiers moving closer to your position. Start leaning out carefully. Take out a few soldiers from a larger distance (#2).

Try moving towards the right wall, so you'll be able to attack a few other enemy soldiers. They will be standing to your left (#1). You could also throw a couple of grenades at them. Keep shooting at the soldiers who should be standing in front of the junction. Once they're gone, turn right and deal with the last group of Monolith units (#2).

You will have to make sure that the area has been secured. Head on to the left corridor. There's a smaller room to your right (#1). Go there now. Thankfully, you shouldn't encounter any additional soldiers here. Go back to the main corridor and start moving forward. Try staying close to the left wall. Be careful. There are more enemy units just around the corner (#2).

You will have to be careful while moving forward. There are several small rooms to your left. Most of them will be occupied by enemy soldiers (#1). Kill them, so you won't get shot in the back or surprised later during the game. You will have to stick close to the main corridor. A second sniper is hiding just around the corner (#2). Kill him before moving on any further.

Keep heading towards your current destination. You will be encountering enemy units quite regularly. Don't forget to check their bodies for additional supplies. You could also pick a new weapon - FT 200M (#1). You shouldn't have any problems finding additional ammunition for it. You're getting closer to a larger room (#2). Save your game here, because the area is not safe.

I would recommend that you position yourself correctly (#1) in order to throw a couple of grenades inside. Once this is done, start leaning out carefully. There are probably 2-3 soldiers inside. Take them out quickly (#2). Remember that you should be aiming at their heads. Don't enter the room if you're not sure that all enemy soldiers have been killed.

Enter the room. It's very important that you save your current game here. Get closer to a large door. It should be located on your right (#1). DON'T enter this room, because you would have been trapped in there. Instead, move up closer to the left wall and start shooting at the generators from here (#2). Don't worry about the shaking screen or the flames. Once you've destroyed all generators, a dialog window will appear on the screen. This is where you will decide which ending would you like to witness.