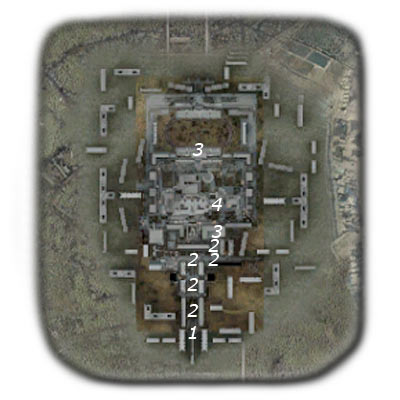 Received from: this quest begins automatically once you've entered Pripyat

a) talk to other soldiers (1 on the map)

d) find the entrance leading to the sarcophagus

You will be able to complete three out of four objectives here. The only exception is going to be the sacrophagus task. We'll get back to it later during the game. This isn't a difficult mission, however you must save your game quite often. You will be dealing with a lot of sniper units, so try using various objects for much needed cover. Check the previous section of the guide if you want to know where to find all snipers.

Make a few steps forward in order to meet other Stalkers. Now you will have to wait for the briefing to end. Start running forward (#1). I'd strongly recommend that you listen to the leader of the squad. He will tell you exactly where to shoot. The most important thing here will be to eliminate snipers quickly (#2). Your teammates will be able to deal with the rest of enemy units.

You will have to repeat all of these actions in order to reach the opposite end of this street. Now you will be turning right. There are more enemy soldiers here for you to take care of (#1). Watch out, because most of them will be hiding inside buildings. You should eventually reach the entrance leading to the parking lot (#2).

Head on to the underground parking lot. You will have to kill a few enemy soldiers here (#1), however you could also wait for your squad members to deal with this problem. Don't forget about the possibility of checking bodies of fallen enemies. Also, try talking to the leader of the squad (#2). Now it would be a good time to proceed with the hotel mission.

Once you've taken a device from the hotel (read the description of the second quest), you will be allowed to move on to the northern exit. I wouldn't recommend moving in a straight line, because you would have been exposed to enemy fire. Instead, try choosing the eastern side of the map. Sadly, you will have to kill a sniper here (#1), as well as a small group of enemy soldiers (#2).

You should be able to reach the entrance to the stadium in about a minute. Try using a front gate (#1). You will also have to make sure that the area has been secured. Once you've entered the stadium, a short cut-scene should appear on your screen (#2). After that, the game will automatically load a new map, so if you want to explore the rest of Pripyat, don't go anywhere near the stadium.

c) discover what's inside the stash (4 on the map)

Don't even think about taking on this mission unless you've secured this entire area. You will have to kill all enemy snipers. Most of them are standing on top of the large buildings. Hotel is one of the biggest buildings here, so you can't miss it (#1). I would recommend that you choose a front entrance (#2).

The entrance is probably going to be guarded by a single opponent. As a result, you will have to kill him quickly (#1). Now you must locate a small staircase. This will allow you to reach one of the upper floors (#2).

You should be able to jump through a window very soon (#1). Repeat this action in order to get closer to a designated area of the map. Now you will only have to go to a correct hotel room (#2). Once you're inside, head on to a small room that's located on your left.

You will have to find two objects here (#1) - some new documents and a decoder. You will be able to use this tool near the end of the game. Doing this should allow you to end this quest. You will also receive further instructions.

a) find a secret entrance

b) use the decoder to open a steel door

c) find out what's inside the secret lab

Just as before, you won't be able to proceed with this mission right away. You will have to be patient. We'll get back to this mission once you've reached a certain area inside Chernobyl NPP.