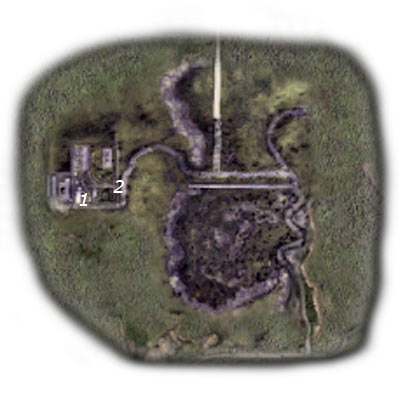 c) disable the device (scorcher; you will be able to proceed with this task once you've safely reached the Control Bunker map)

I'm sure that you will be able to go through the first part of the map without any major interruptions. You should also take a look at the previous section of the guide. I'll start with road leading straight to the main compound (#1). You will have to take out all enemy units from a very large distance, however you can't allowed any of these guys to surprise you. Additionally, take out a single sniper. He should be standing on your left (#2).

Once you've secured the area, proceed to the main road (#1). I would also recommend that you stick close to the left wall, so you won't be exposed to enemy fire. Thankfully, there are only a few soldiers in this area. Ignore the yellow filter, as well as ghosts (#2). They can't hurt you, so you may as well ignore them.

You will encounter a smaller blockade very soon. As you've probably noticed, there are some explosive barrels here. Move backwards or use the gun to destroy them (#1). Next, you will have to take care of the enemy units. Keep heading towards the base. Once you're close enough, try taking down at least one sniper (#2). It's very important that the snipers are killed. Don't forget about the possibility of saving your current progress!

Now it would be best to move to your right, so you'll be standing near a large wall (#1). This will allow you to avoid several other snipers, however you will have to deal with them sooner or later. Also, be on a look out for standard enemy soldiers (#2). There's a larger group just around the corner. Take care of that small problem. Keep going straight.

You should be able to reach the main entrance to the base (#1). Try moving to the left side. Take out several other thugs from here. Some of these guys may actually move closer to your position (#2). You have to be ready for these types of attacks.

Now you will have to reach the entrance to the underground control bunker. As a result, head on to your right (#1). It would be best if you started running towards your current objectives, so you will avoid all remaining sniper units. Locate a small carriage (#2). You will have to enter it. Turn right and head on to a long tunnel. There are a few soldiers here. Kill them and reach the end of this zone. You will have to wait for the game to load a new map.