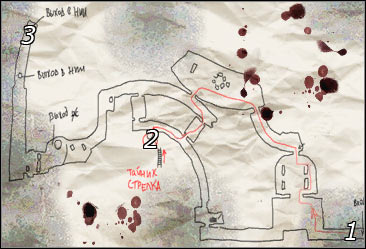 Starting point: 1 on the map, however if we want to be more specific - once you've talked to Mole in the Agroprom Research Institute sector (near the entrance to the sewers area)

b) find out what's inside the stash (2 on the map)

Once you've reached the sewers area, you will have an opportunity to score one of many side missions. You will have to take out all surrounding bandits. It's going to be very easy, especially since you're going to have to through them in order to reach Strelok's stash. Don't forget to use your flashlight in the sewers, especially since it's very dark here. You should also save your progress as often as possible. Don't forget about acid anomalies. You will have to avoid them at all costs.

You start off inside a small, dark tunnel. Head on to the next section. You could also check one of the nearby bodies for valuable objects (#1). You will come across some of the first bandits just around the corners (#2). Don't use the stairs. Instead, take them out from a distance.

The second group of thugs can be found on your right (#1). You won't have to avoid them, because that's where you'll have to go. Be careful, though. Some of the bandits are carrying shotguns, so try maintaining a safe distance. You won't have to go to the left corridor, because you would encounter very serious anomalies here (#2).

Make sure to use your secondary map if you don't where to go. Like I've said before, there's only one path here, so you shouldn't have any major problems. You will come across a spiral staircase (#1). Use it to get down to a lower level. Be careful for acid traps. Move slowly or use the jump button in order to avoid them (#2). SAVE the game once you've reached the exit. You should also choose one of the better guns from your inventory.

Head on to your left. As you've probably suspected, there's a very powerful mutant in this room. Additionally, it's partially invisible, so you might have some problems spotting it. The mutant will reveal itself once it's ready for an attack (#1). Keep going backwards. You will have to be shooting at the thing at the same time. You will also have to reload your machine gun, however if you're using a shotgun, you should be able to kill this monster quickly (#2). Check the body and collect a valuable object.

Don't leave this area just yet. Head on to the stairs. They should be located on your right. Keep going straight. You will come across a very powerful artifact here - Urchin (#1). I'd strongly recommend that you pick it up. Leave this area and head on to a nearby door. You will come across a small passageway (#2). Save your game once again, because the area is crawling with enemy units.

I would recommend that you start off by SECURING this entire tunnel area (#1). You will have to deal with at least 8-10 well armed soldiers, so be careful. Most of the enemy soldiers will appear on your right (#2). There's a small exit there, however don't use it just yet. The most important thing here is to take care of all bandits. Also, make sure that you've checked their bodies for grenades and extra ammo.

Now you will have to use one of the smaller passageways in order to reach your current destination. Once you're there, turn left (#1) and use the jump button to find yourself on top of the crates. You will have to press the crouch key in order to enter this small tunnel. After that, climb the ladder (#2).

The first thing that should be done here is to pick up a nearby artifact - Fireball (#1). You will also find an upgraded machine gun - Fast-shooting Akm 74/2. This is a VERY powerful weapon and I'm sure that you have a lot of ammunition at your disposal, so start using it. Strelok's stash is hidden behind a large map (#2). You will have to pick up a small flash disk. Once this is done, a second main quest will begin, however you won't be able to finish it right away.

Once you've reached the top, I'd strongly recommend that you save your current progress. Head on to a large tunnel. You will receive a confirmation that you've successfully completed this quest, however you are also going to be attacked by a second mutant. This monster will be using psi-powers on you (#1). You can fight this creature or escape. If you decide to fight, shoot at it from a smaller distance (#2).

Sadly, you won't be able to pick up any valuable objects from the corpse (#1). As a result, you should consider skipping this fight. You would have to reach the exit (#2). Use the ladder and wait for the game to load a new map. You'll end up inside an army base.

2. Find out what happened to Ghost

Received from: this quest will begin automatically once you've collected a flash disk from Strelok's stash

a) find out what happened to Ghost

I think it's fairly obvious that you won't be able to fulfill this task right away. We'll get back to this mission later during the game. For now, focus your attention on leaving the sewers safely.

a) talk to Doctor; he can be found in Strelok's hideout (2 on the map)

You won't be able to fulfill this task during your first visit in the sewers area. You will have to talk to Guide (Cordon) in the first place. He will order you to go back to the catacombs. Once again, you will have to reach Strelok's stash. Sadly, you will have to deal with new problems along the way. You will encounter bandits in the exact same spot as before (#1). Instead of fighting only one mutant, this time you will have to kill two monsters (#2). You will also come across several soldiers.

Once you've reached the ladder, try reaching the stash. Our main character will once again lose consciousness. After that, a longer cut-scene will be displayed on your screen. Listen to what the Doctor has to say to you (#1). It's very important, because you will find out something INTERESTING about our main character. I won't spoil the fun. You will have to find out on your own. :-) The Doctor will grant you with a new task, however we'll get back to this mission once we've reached Pripyat. You may exit the sewers. Watch out for other soldiers (#2). You will also have to escape from an army base, however it's going to be much easier this time, mostly because you have better equipment at your disposal.

a) reach one of the hotels in the Pripyat district

b) find the room with a secret stash

c) discover what's inside the stash

Obviously, you won't be able to proceed with this mission right away. We'll get back to these objectives once you've reached the city of Pripyat.