Hurricos is a Summer Forest level in Spyro 2: Ripto's Rage. It's one of the most difficult levels associated with this home world. Below you will find the walkthrough for this stage.

To complete Hurricos in 100%, you have to do the following things:

The level starts in a huge open area. Talk to a nearby creature to learned what is happening here, and proceed. In this area, as in the rest of the level, you'll find two types of opponents. The first one is the troll. You can destroy it with fire. The second is the robot, which you can eliminate using charge. They usually fight among themselves. You must be careful, if you attack the robot during such a fight, you can be crushed by the troll. That's why it's best to split them up and fight each one separately. 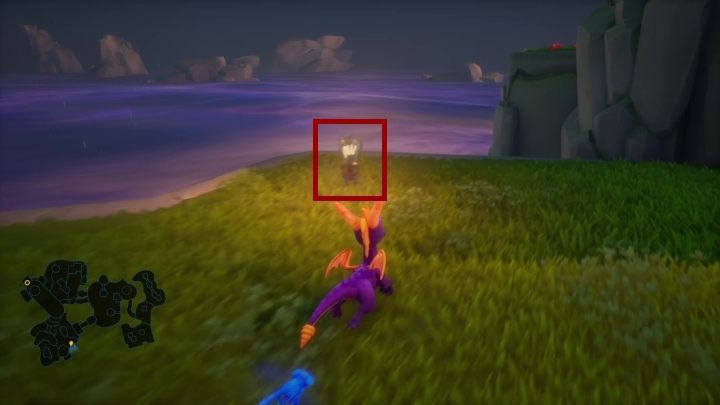 After defeating all enemies on the map, you can start collecting the crystals. In addition, you must also find two light bulbs. You will have to put them into both electric gates to make them stop working. 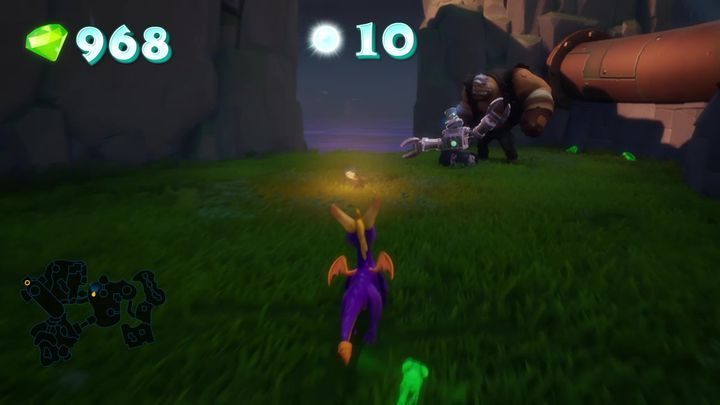 This road will lead you to another large area, this time with windmills set up everywhere. You'll find more trolls and robots there. Take them out and find more light bulbs, both of them are near the battlefields, so you shouldn't have any problems finding them. You will also find an acceleration gate in this area. However, it will be impossible to use it at this stage. Its use is only required when you are planning to get all the crystals and orbs.

Then go to the next electric gate. You will exit in a very similar location. Here you will find the same set of enemies. You will also have to collect some crystals and the last bulb. Use it on the gate in the left corner. That's the end of the level. However, if you also want to get the orbs and the rest of the crystals, below you will find a description of all the tasks appearing in Hurricos.

In the second location of this stage contains one more passage. It is located on the opposite side of the area. It will lead you to an area with huge generators. Here you will be asked to take care of gear grinders who steal lightning stones. 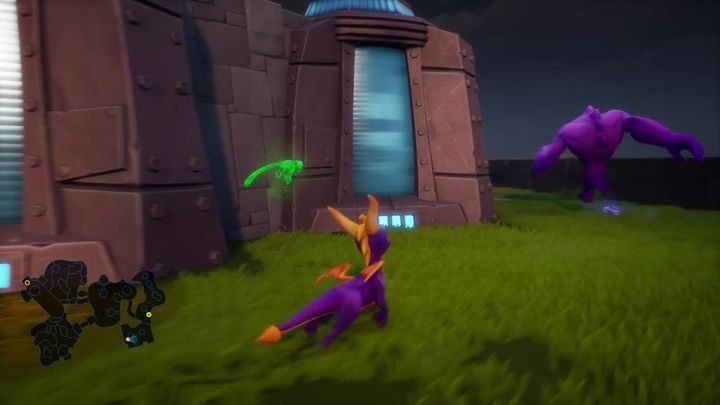 If you agree, you will have to take out 10 gear grinders. They will appear in two locations. After taking out one, another one will take its place. This will continue until you eliminate the required number. You can do this with fire. 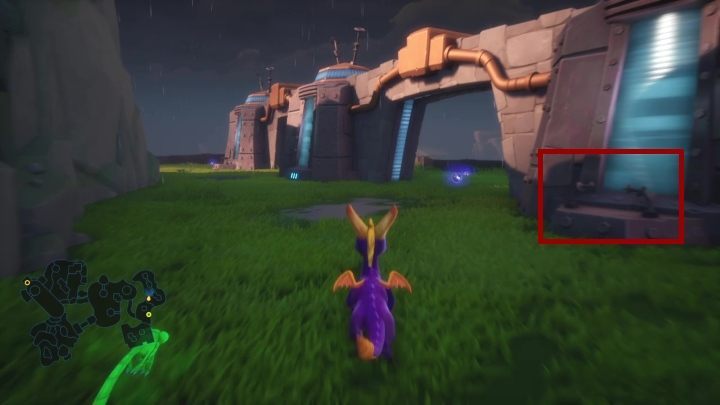 Finally, you must also activate all generators. In order to do so, you must install the lightning stones in all spots that look like in the picture below. You can do this by spitting stones at these places. After activating all generators, the task will end.

This is the first stage of flight over the factory. In order to unlock this challenge, you must activate the acceleration gate and destroy the two lanterns standing by the walls in the last location. Behind one of them there is a button to release the windmill. The second one hides the shelf from which you can begin. 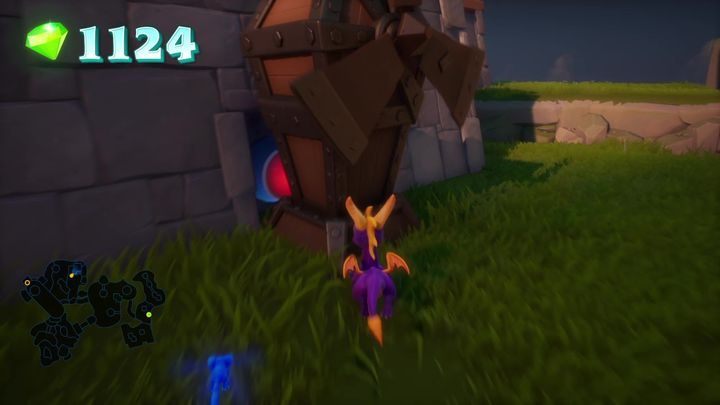 Note: By the way, you can also destroy the two windmills in the second location, behind which there are buttons deactivating the local windmills. This will allow you to move on to the Factory glide 2 challenge without going back down. 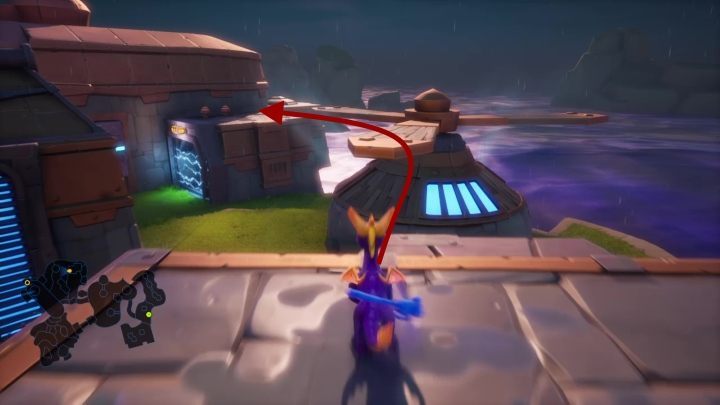 When you start the task, you will be on a rock shelf. Jump from it to the roof. Collect the crystals and jump on one of the windmill's rotors. Wait for the rotor to turn enough to jump to the other side. A sequence of shelves awaits you there. You have to jump on them as soon as they begin coming out, otherwise you may not have enough time to jump further. 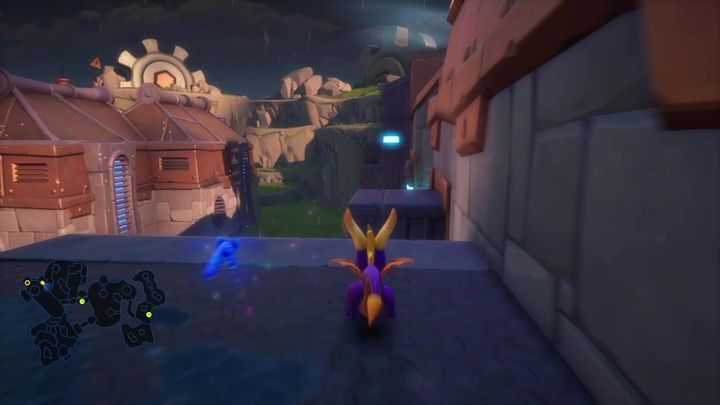 After completing this sequence you will land on a rock shelf which will lead you to the end of the task.

You will receive this challenge immediately after the completion of the first part. If you have previously deactivated all the windmills, you can proceed immediately. If not, you'll have to go down and use the accelerator gate, and destroy the windmills blocking your way to the deactivation buttons. 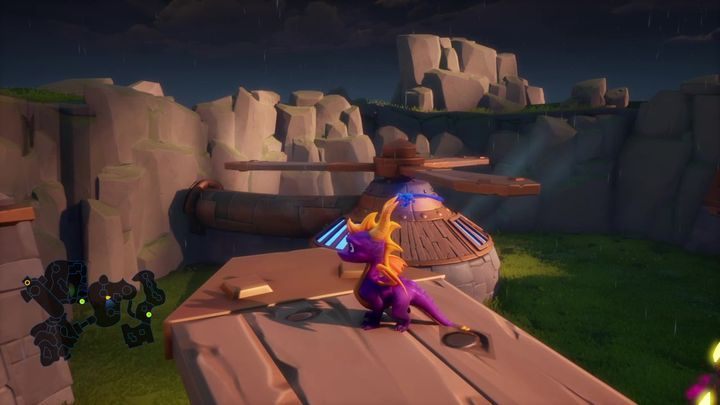 This time the road will be much longer. First you have to cross over to the first windmill. As soon as your rotor is close enough, jump to the next windmill. You have to be careful because it is easy to fall. 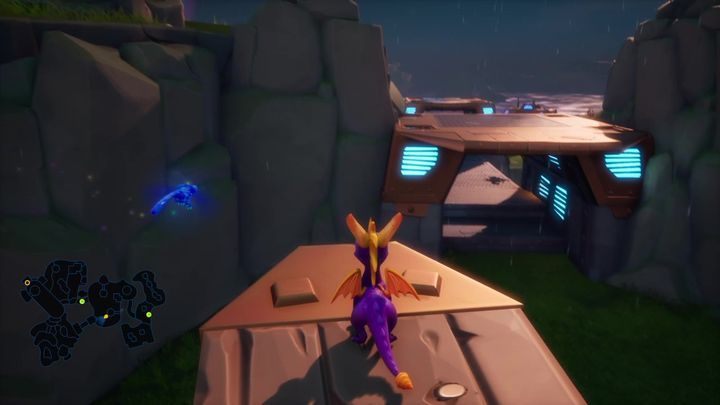 Then you have to jump to the roof of the gate through which you entered from the first location. To do this, you will need to use hovering. Then jump onto the roof of the next gate and from there to the rock shelf on the right. From this shelf you can turn left to collect additional crystals. However, the main path leads to the right. You will find there similar moving shelves as in the first task. 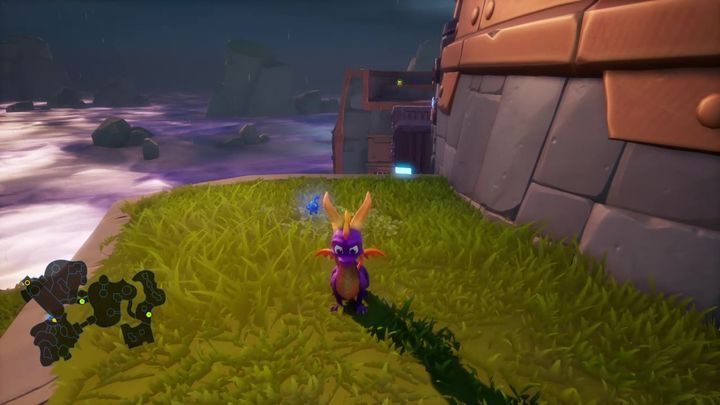 This time, however, they hide faster. Jump onto the first one when it slides out and immediately jump to the next one. Because it's higher you'll have to use hovering. From this shelf you will jump on a small protrusion. Talk to the creature there, collect the crystals and press the button. This will complete the task.