Colossus is one of the first levels in Spyro 2: Ripto's Rage! Spyro visits a land of Monks who worship hockey. This chapter contains our walkthrough for this level.

To complete Colossus in 100%, you have to do the following things:

You start on a small platform. Collect crystals and speak with the Monk. Jump down and defeat goats on the glade. 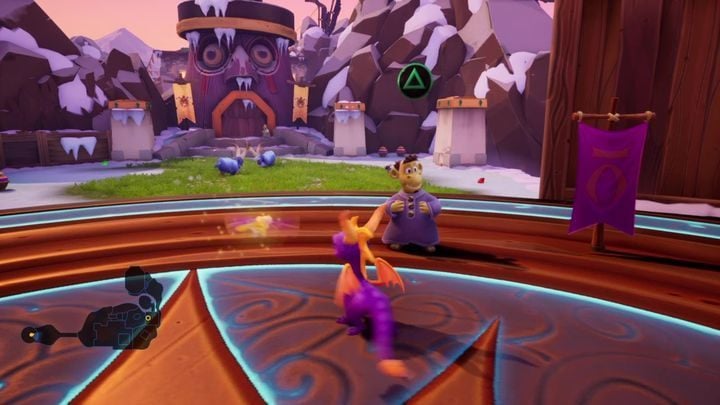 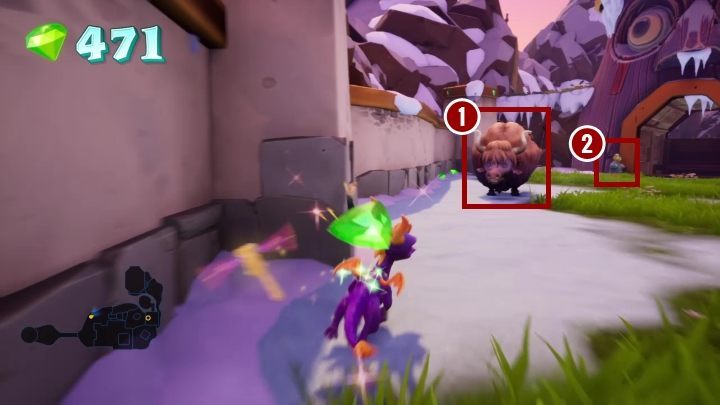 The Monk [2] will allow you to pass. You reach another glade. Defeat two goats and a yak. Here, you will also find a Powerup Gate that allows you to use Spring Jump. However, you can't use this one yet - Spyro doesn't have enough spirit particles. 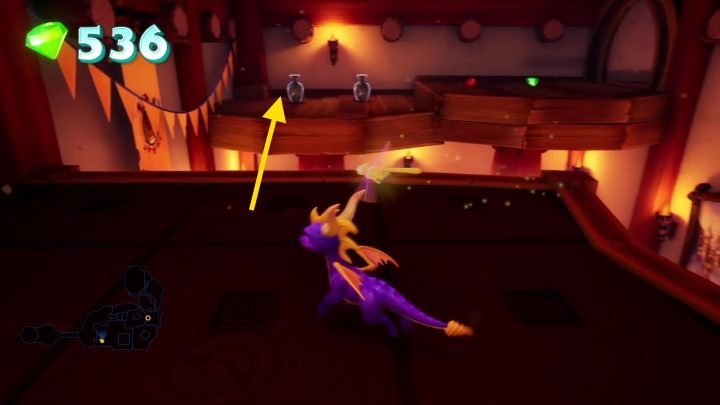 Leave the platform and get on a small ledge. Collect crystals and jump on the next ledge. Do the same here. Another ledge is behind a narrow passage that divides the platform you are standing on into two parts.

The window near the last platform allows you to reach another glade. Eliminate three goats and collect all crystals on the glade. Ignore the inactive Powerup Gate and head towards the small cabin. The Monk standing near it informs you that the Yeti is inside of this cabin. Ignore him and go inside. You don't have to fight with this enemy - the Yeti will defeat itself. You receive a golden statue. Collect crystals inside the cabin. Exit by going through the windows. 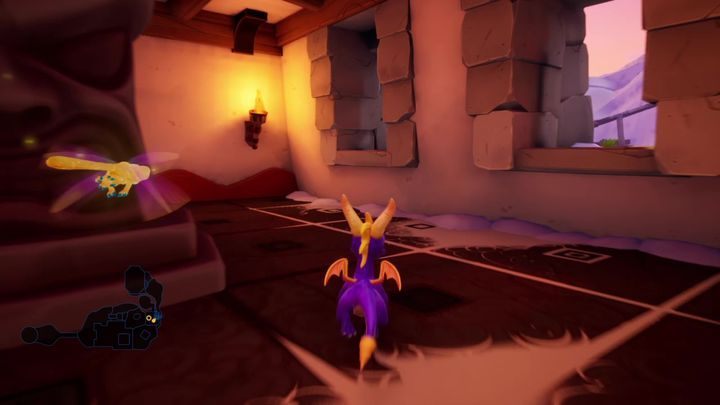 You are on a narrow path that leads to a frozen pond. You find stairs that will take you to a hockey rink. Find the Monk who will give you challenges no. 2 and 3. 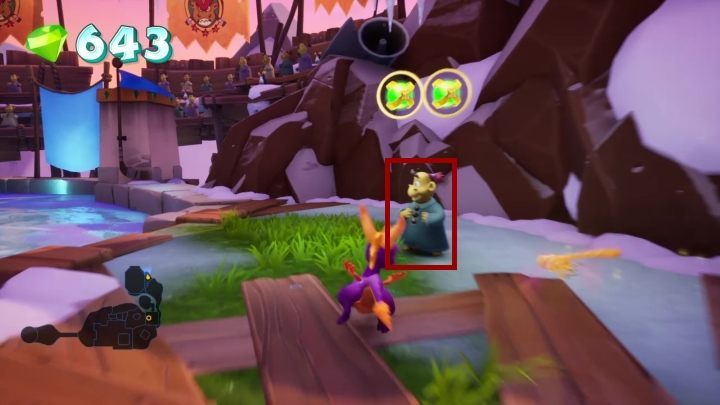 Complete them. Go back on the glade next to the Yeti's cabin. Both Powerup Gates are now active - you can use them. Thanks to it you will be able to reach the upper floor of the building, the same one that allowed you to access the glade. You find the Professor - he gives you challenge no. 1.

Jump down on the roof right below the entrance to the room with the Professor. Collect crystals and use flames on the rocket. It will destroy a rocket standing on a small column. Jump on it and collect crystals. Then, jump on the adjacent ledge. Eliminate the yak and the goat. Collect all crystals. 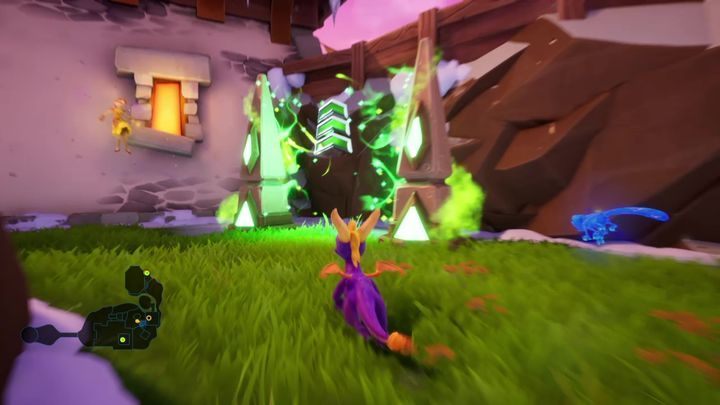 Go back to the first Powerup Gate you have encountered. You will be able to jump on the roof of Yeti's cabin. You find a path that leads to a cave with crystals.

Commentary: Use flames on all 10 monk statues that are on the map. "Purified" statues are marked with a different color. A gold statue isn't possessed by an evil spirit. The statues are in the following spots:

Commentary: This challenge is given to you by the Monk standing near the hockey rink. This is the first out of the two challenges given to you by this Monk. You need to score 5 shots in 2 minutes. The challenge seems easy, but you can have a few problems with it. To shoot, Spyro needs to catch a hockey puck. You move on ice which means that you can't use charge. Also, Spyro's moves are slowed down. Be very careful where you shoot. 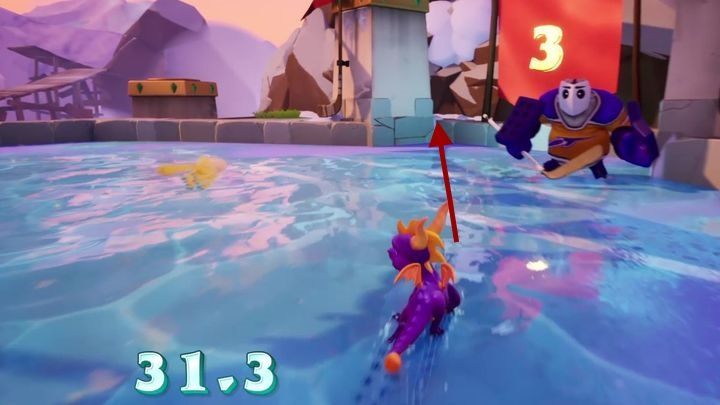 You also need to trick the goalkeeper. Aim at the opposite corner of the goal. The goalkeeper won't be able to catch the puck.

Challenge 3: Defeat an enemy at hockey

Commentary: This is the second challenge received from the Monk near the hockey rink. You need to score 5 goals before your enemy does that. The rules and the gameplay are the same. However, Spyro will also have to deal with his enemy. 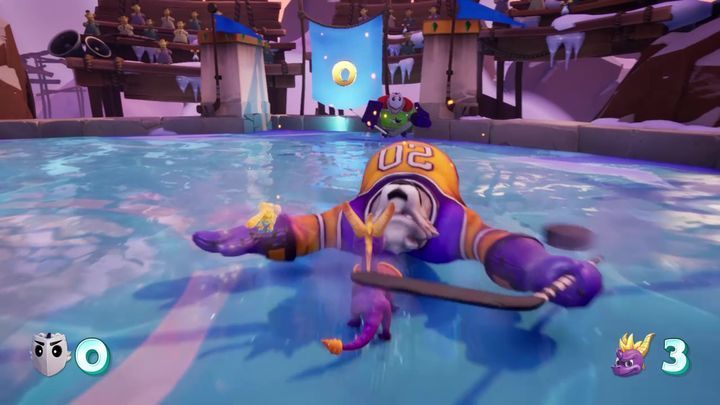 Simply keep using your flames on the enemy. This attack will knock him down - the enemy loses precious time allowing you to catch the puck and score a goal.