The following chapter is dedicated to the trophies that you can acquire while playing Spyro The Dragon. Here you will find their detailed descriptions along with comments about how to unlock each of them. In the game, there is a total of 37 trophies to be won, including 16 bronze, 17 silver, 3 gold, and 1 platinum.

Requirements: Acquire all of the trophies in the game.

Requirements: Set out on a trip with the Balloonist.

Remarks: After saving 10 dragons and defeating the boss, go talk with the Balloonist. When you agree to continue your journey with him, the trophy will be unlocked.

Remarks: To the left of the starting location in Artisans there is a water reservoir with two waterfalls. There are platforms on its surface. You must activate them all in any order. The only condition is that you must not stand on the same platform twice.

Remarks: There are sheep scattered throughout the Stone Hill level. You must use your flame attack on 10 of them in order to gain the achievement. 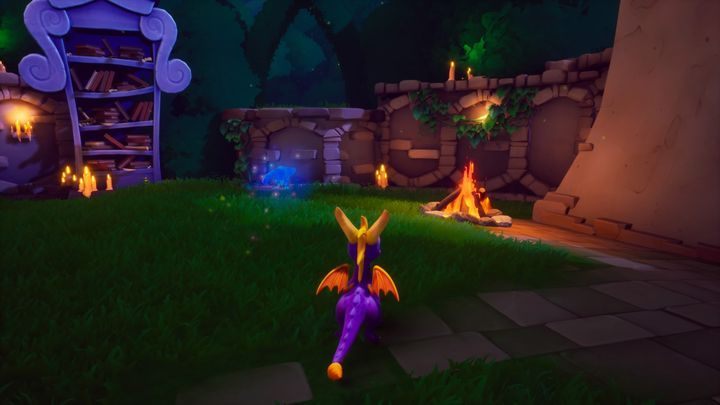 Remarks: Both of the bonfires are located by the stairs leading to the exit from the level. You must simply use your flame attack on each of them.

Leaf on the Wind

Requirements: Glide to the Town Square area with the Egg Thief.

Remarks: Reaching 100% completion on the Town Square level will require you to get quite high up. Reach the stairs, which have an extra step on the left. Climb atop this step. You must jump from it, in such a way as to begin gliding at the highest possible position. Additionally, you will have to turn slightly, in order to avoid a tower. The achievement will be unlocked as soon as you land in the correct area.

Remarks: While fighting Toasty, you must avoid the attacks of his dogs. A detailed description of this fight can be found in a separate chapter.

Requirements: Do a loop around an arch on the Sunny Flight level.

Remarks: The bridges on which the trains run on the Sunny Flight level have many arches. Fly under any of them and immediately push R1. You will then make a loop around it and the trophy will be awarded.

Requirements: Use a cannon to kill a taunting Gnorc.

Remarks: While using a cannon, you must eliminate a troll that feels confident enough to taunt you. Usually, these trolls are hiding in tents. This is why you should consider burning all of them, in order to locate the right troll. Then simply man the nearest cannon and shoot at him.

Requirements: Charge a Vulture on the Dry Canyon level.

Remarks: When you play through the Dry Canyon level, you must decide to charge towards one of the vultures.

Birds of a Feather

Requirements: Burn all of the Vultures in Cliff Town.

Remarks: You must burn all Vultures on this level. If you use the charge even on just one of them, you will have to replay the level again to get the achievement.

Remarks: You will encounter Ski Gnorcs in the Ice Cavern. They will throw snowballs at you. Your task is to eliminate all of them by any method.

Requirements: Burn all of the Fairies in the Night Flight level. 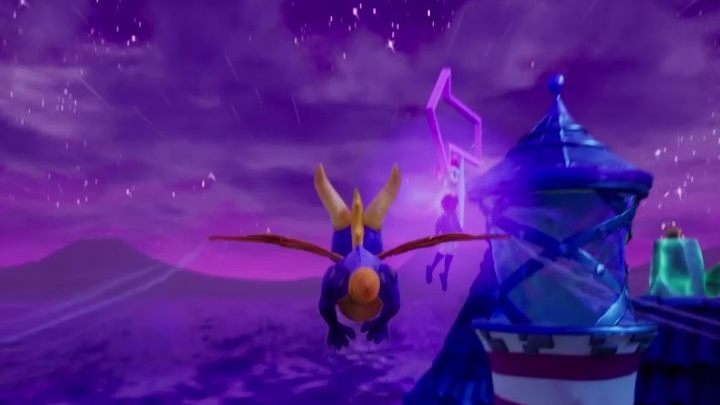 Remarks: When beating the Night Flight level, you will encounter three fairies that indicate the direction in which you should move around the map. To complete the achievement, you have to flame all three of them. Two of them are located next to chests. The third can be located by the gate.

What's in the Box?

Remarks: You can find the chest in question on a ledge near the point where you leave the level. Opening it will only be possible if you have the key. You can find it on another ledge, the one from where you can jump from the level of the tunnel that leads to Doctor Shemp.

Remarks: At the beginning of the level, you will find 4 Druids who are standing in a row. To unlock the achievement, you have to eliminate them all with one charge.

Pops of the Tops

How to unlock: Detonate the three explosive chests on the pillars in Alpine Ridge

Commentary: Near the room on the level of which you'll finish the stage, there are three shelves. There is an explosive chest on each of them. You must open all of them. To do this, jump on the platform, set fire to the chest and go back on the previous platform. In this way you will avoid damaging your health.

How to unlock: Defeat all the Metalback Spiders in High Caves.

Commentary: In the caves near the starting point you will find 5 metalback spiders. They are resistant to Spyro's basic attacks. To kill them you have to use the acceleration ramp to make your charge strong enough. You can also go through the caves without eliminating spiders. In the last cavity you will find an exit to the surface. There you will meet a fairy who will temporarily increase Spyro's firepower.

How to unlock: Defeat the hidden Egg Thief in Wizard Peak.

Commentary: The thief is on a platform located quite far from the rest of the level. You can get there via a ramp. Use it to gain speed and jump onto the platform.

How to unlock: Flame all of the Direction Fairies in Crystal Flight.

Commentary: When completing Crystal Flight, you will have to burn the two directional fairies. Both can be found near gates.

How to unlock: Collect 400 gems in Blowhard.

Commentary: When clearing Blowhard, you must collect all the crystals on the map.

How to unlock: Flame 5 Glowing Mushrooms in Beast Makers. 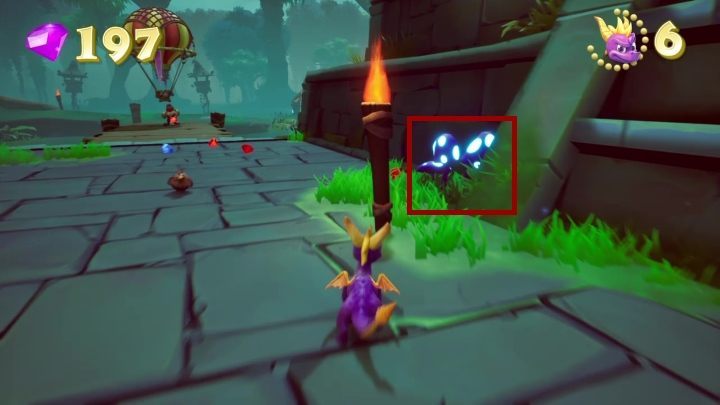 Commentary: Glowing Mushrooms are in the following locations:

How to unlock: Light 3 fireworks within 15 seconds in Terrace Village.

Commentary: This level has 3 fireworks located near each other. You need to light them all within the required amount of time. Two of the fireworks are on a rooftop - wait until you reach the final part of this level. During that part, Spyro will be able to reach the right rooftop. 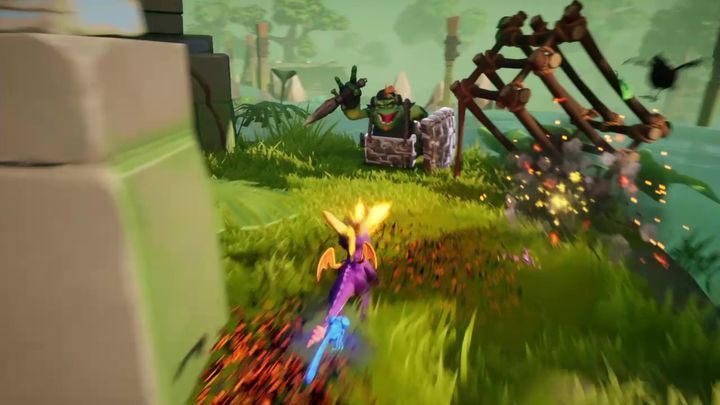 How to unlock: Free both trapped chickens in Misty Bog.

Commentary: There are two cages with chickens in Misty Bog. One cage is right next to the starting location. The second cage is on the island near the bridge. Flame both cages and eliminate their guards.

How to unlock: Jump off every Supercharge ramp in Tree Tops.

Commentary: Simply jump off every of the 5 ramps in this level.

I Believe it is Time for Me to Fly

How to unlock: Complete Wild Flight without touching the ground.

Commentary: Avoid touching the ground. This is especially difficult to do in the place with planes. There are many elements that you can touch - doing that will make you stop flying.

Gems in the Rough

How to unlock: Collect 500 gems in Metalhead.

Commentary: You need to remember about two locations that are easy to miss:

The pit behind the hole in the sewer grate (you can recognize this place by the bridge that runs through the sewer).

The cabin that opens after you defeat Metalhead. You can jump from the cabin on the stone ledge behind the waterfall - you will find more crystals.

How to unlock: Charge through three Armored Fools in a row in Dream Weavers. 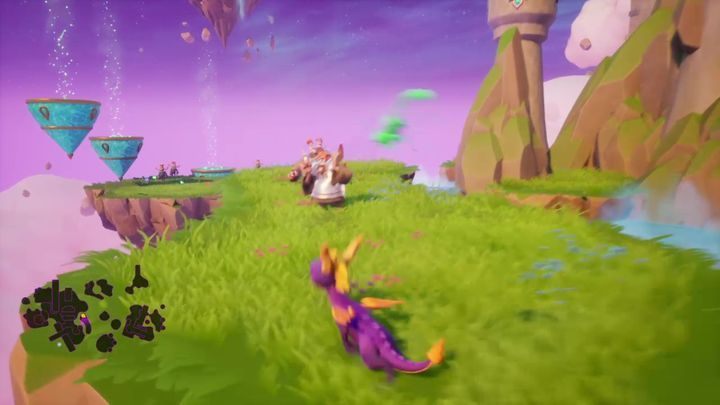 Commentary: One of the islands has three Armored Fools standing in a row. Charge at them when they get small to eliminate them in one go.

How to unlock: Defeat three Demon Dogs while in large form in Dark Passage.

Commentary: Demon Dogs grow bigger when a Lamp Fool's light goes out. In this form, Demon Dogs are vulnerable only to fire. Defeat 3 Demon Dogs in their large form.

How to unlock: Charge through four Puffer Birds in a row

Notes: On one of the paths in the game you will find yourself in a series of Puffers. You have to eliminate all with one charge

How to unlock: Defeat all Tin Soldiers in the Haunted Towers.

Notes: Using the power of the turbo fire, you must eliminate all lead soldiers at this level.

How to unlock: Finish the Icy Flight never landing on the ground.

Notes: This is a relatively easy task. The only places where you can touch the ground are the platforms with crates and the tracks of the queue.

How to unlock: Defeat four Nightmare Beasts in Jacques in one glide.

Notes: Behind the first dragon you will find a jester. To the left of it there are four beasts. You have to liquidate them at once, without interrupting the flight.

I'm in the money!

How to unlock: Unlock Gnasty's Loot

Notes: In order to unlock this level, you have to complete 100% of the game.

How to unlock: Complete the Gnorc Cove without killing any Rats.

Notes: You can't kill any rat during the stage. So you must be extremely careful not to take too much damage. You will not be able to regenerate.

What Really Grinds My Gears

How to unlock: Destroy 6 gears in Twilight Harbor. 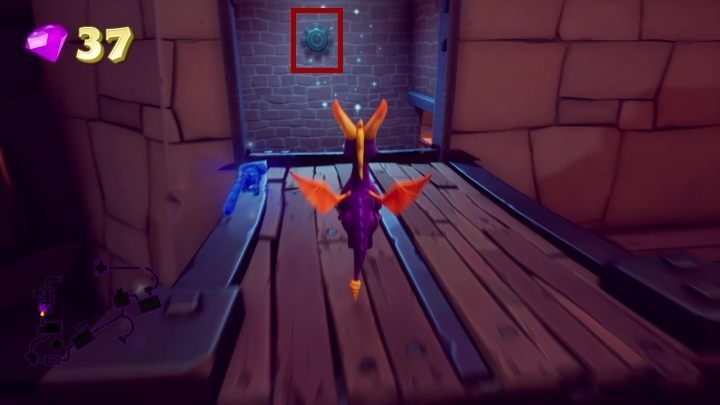 Notes: At this stage you will find 6 gears, which are hidden in different parts of the level. You must destroy them all.

Dragon and On and On

How to unlock: Have Gnasty Gnorc run 5 laps around his level.

Notes: When the gate is opened, Gnork will start running on the track. Let him run 5 times before you attack him.

How to unlock: Gnasty's Loot: Collect all gems in the level

Notes: If you have reached 100% of the whole game, you will get access to the bonus level. You must collect all the crystals that are there.