In the beginnig of the second stage you have to spend some time in the creature creator. Notice, that in the right hand side panel there plenty of your creature's abilities and features depending on kind of food it eats. Familiarize yourself with them.

Every kind of creature has four abilities symbolized by corresponding icons. Herbivores have some defensive and diplomatic abilities.. Carnivores are predators, so their abilities are mostly offensicee. Omnivores combine both - they can fight, but theu have got no problem in making new friends.

Getting out of the water

First of all - you will need some legs. You can remove things that allowed to move in the first stage - you won't need them anymore. And you will get some points back. 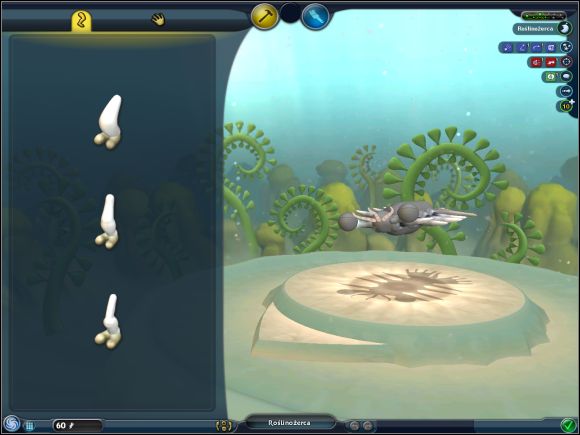 If you want, you can add it additional mouth to make it omnivore.

You would be able to change it later - but keep in mind that this is the last stage you control the creature and soon you would have to make some final and irreversible changes.

Start creature stage by discovering your surroundings. As you can see - it's pretty different from the last stage. You can spot plenty of skelethons here. By picking it up, you add additional organs to the creator. 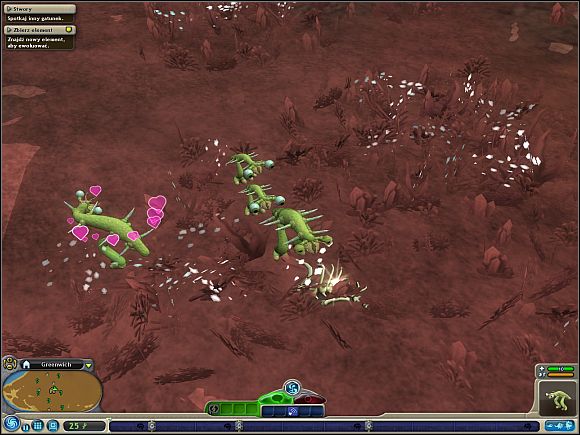 First of all - food. If your species is herbivorous - you have to look for it in the woods. But if it prefers meat you will have to hunt and kill other species. You can find more in chapter Different types of food.

Look at the DNA point meter in the bottom of the game's screen. In the last stage your creature was growing when you collected particular amount of points. Now it won't be growing - it will be developing brain. Reaching every next point level will give you ability to add another creature to your stock.

After you reach the first level of brain developement - you will be able to add a creature to your stock.

Practically it looks likt his - after your brain is capable of being able to join other creature to your stock - you have to get near the other being from secies and encourage it to join you (find more about it in chapter Making friends). Your comrade would help you making friends both in making friends with other species and fighting.

Having companions is very important because all this stage is about migration - moving from one nest to another. The more companions you've got - the better..

First migration begins soon after you get the first brain development level. Take one companion with you and follow the white dots one the minimap. 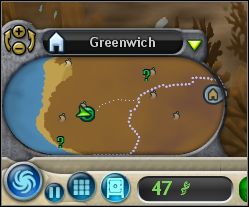 Smaller dots guide you to small nests, where your creature reborns after it's death. Bigger dots show main direction of migration.

How to encrease the amount od DNA points? Make friends with other species or just attack them. More DNA point means more elements for the creator. In left top side of the screen you can find number of points you will get after performing attack or friendship. 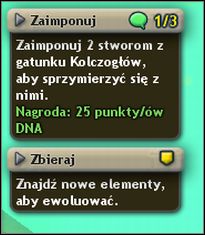 You have to remember, that your behaviour affects later part of the gameplayi. Your species will get unique abilities depending on wheter it's attitude is aggessive, peaceful or something in between.