On this page of the Spider-Man Miles Morales tutorial, you will find Easter Eggs that have been hidden in the game.

Easter egg content may contain major game spoilers, so read at your own risk. 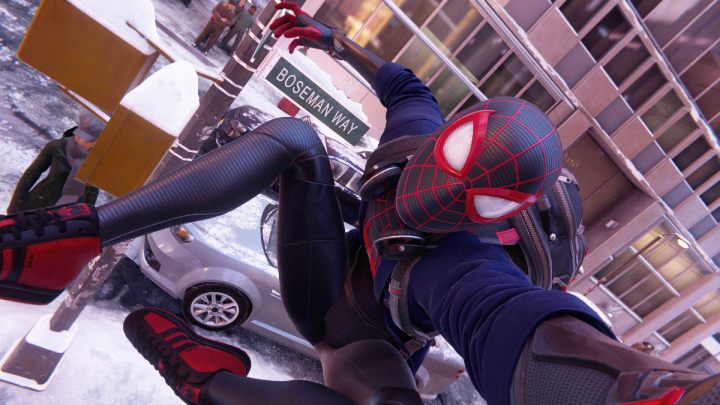 After completing the main storyline, during the credits, the developers of the game pay tribute to Chadwick Boseman, who died in 2020. This is not the only nod to him, one of the streets has been renamed to "Boseman Way" (the 42nd Street section between 1st and 3rd avenues in the Midtown neighborhood).

In front of the embassy building in Midtown, hangs the flag of Wakanda, the fictional country from the movie "Black Panther," in which the late actor played the lead role. Also, one of the time capsules contains the flag of Wakanda. The flag can also be spotted during the Harlem Festival. 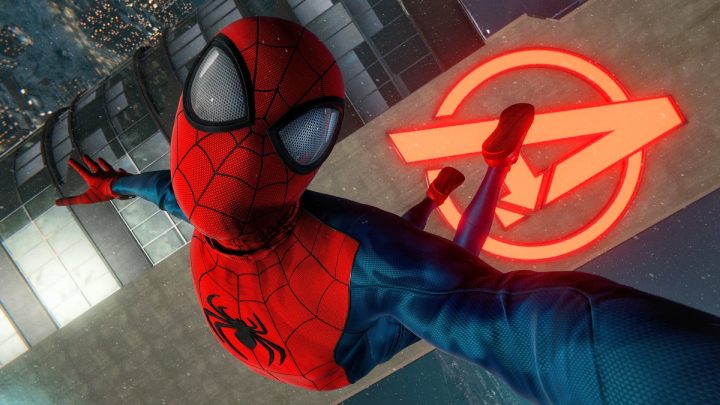 On Manhattan, of course, you could not miss the headquarters of the Avengers. It is located in the heart of the Upper East Side neighborhood. 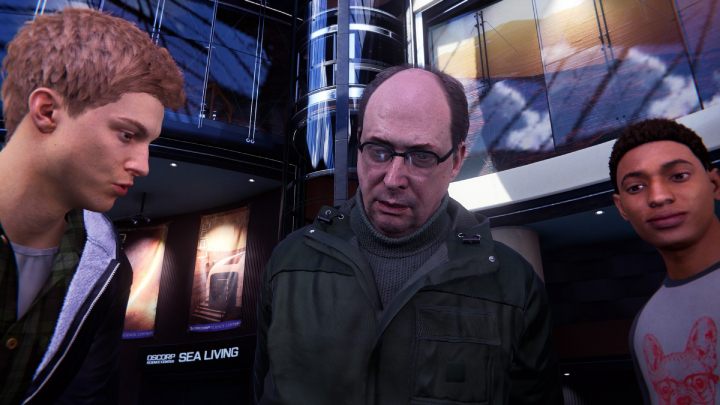 During the 16th main mission, Like Real Scientists, a young Peter Parker, accompanied by Dr. Otto Octavius, can be seen in the hall of the science center during a flashback. They discuss a collaborative project that includes memory metal.

Tombstones of Ben and May Parker 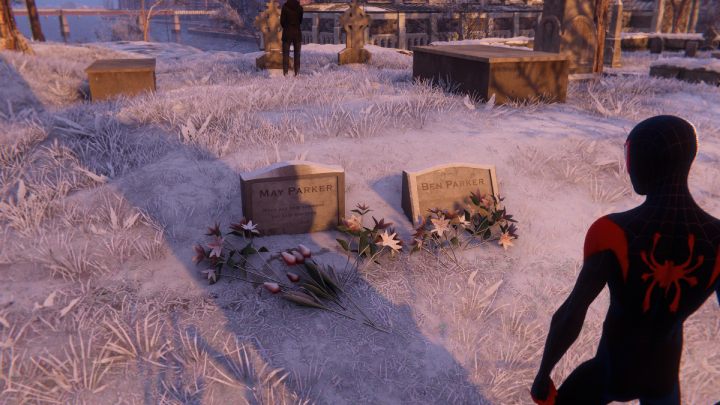 Miles' father Jefferson Davis' grave can be found in Harlem Cemetery. This task is related to winning one of the trophies. Peter's uncle and aunt, Ben and May Parker, were also buried nearby. 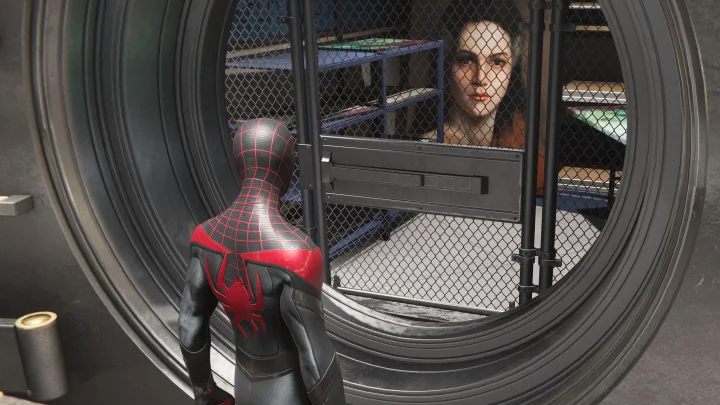 While completing the 11th main mission, Underground Undercover, Miles infiltrates Fisk's old tower. In the Vault, you can see a large portrait of a woman named Vanessa, who is the only person Wilson Fisk has ever loved. In a later side quest, Ganke helps Miles hack into the Kingpin's computer system, correctly guessing that he used her name as a password. 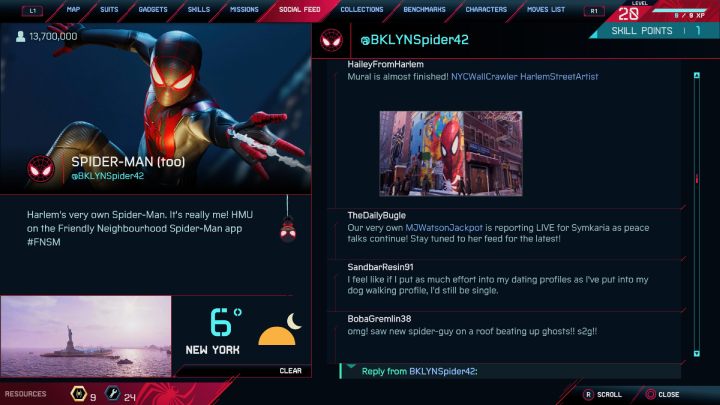 Miles' nickname on his social media channel includes the familiar to Miles Morales fans number 42. This is the number of player Jackie Robinson, the first African American to play in a professional baseball league in 1947. 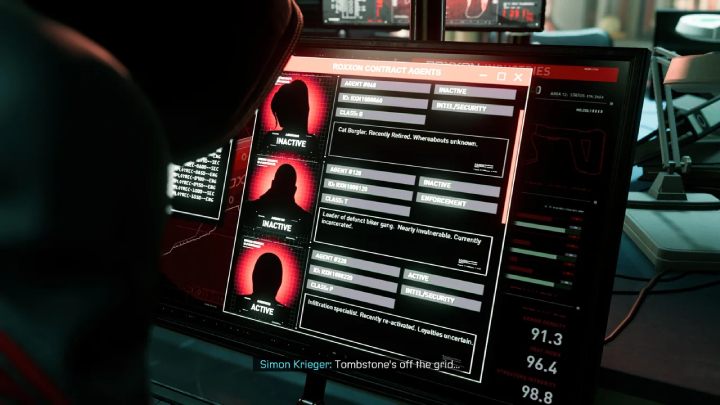 During the 14th main mission, Tinker Tailor Soldier Spy, Miles gains access to Roxxon's private data. One of the computers has information on 3 mercenaries that Simon wanted to use for his projects. First on the list is Black Cat, currently retired, whom Peter met in the DLC for the first game. In second place is Tombstone, the gang leader whom Peter defeated in the previous game. The third mercenary is Prowler, Aaron Davis. 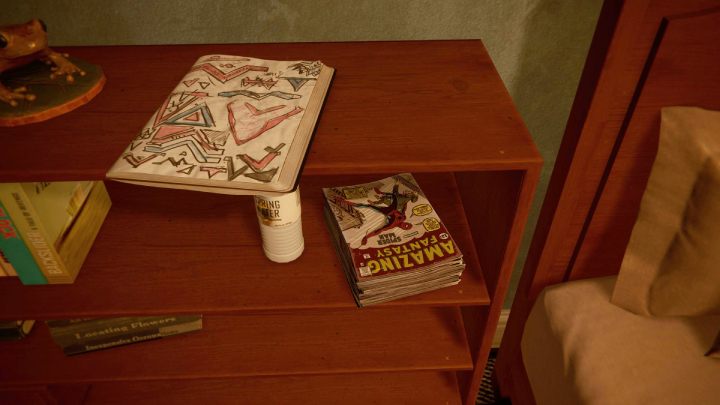 In Miles' bedroom, next to the bed on a shelf, lies "Amazing Fantasy" #15 from 1962. It was in these pages of the comic that Peter Parker made his debut as Spider-Man. 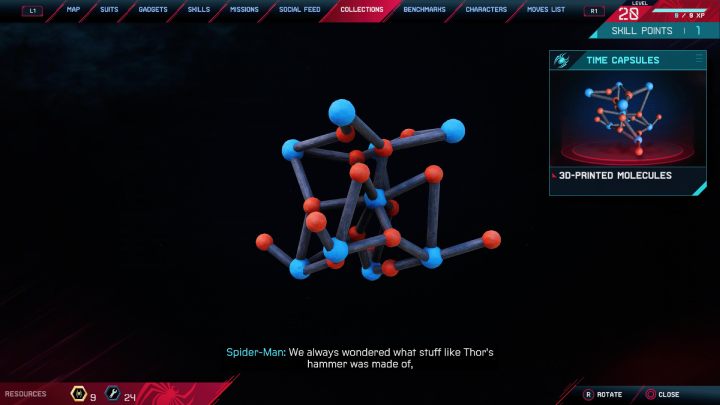 In one of the time capsules, you will find a model of the particle that Miles and Phin created while wondering what Thor's Hammer, Mjölnir, is made of. 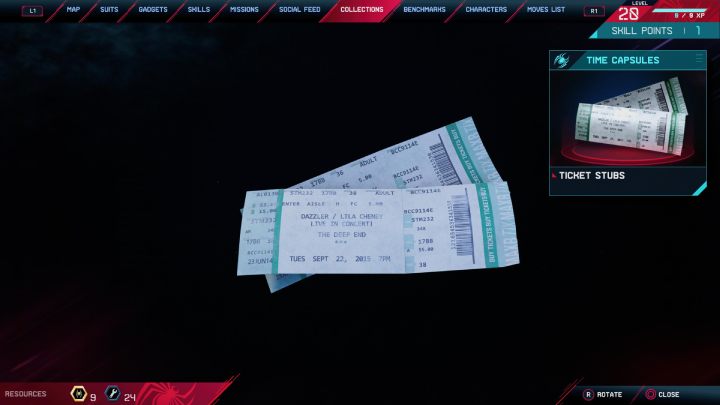 Another time capsule contains tickets from 2015. Miles and Phin went to a concert by Dazzler, a.k.a. Alison Blair and Lili Chaney. Both characters are known from the X-Men universe. 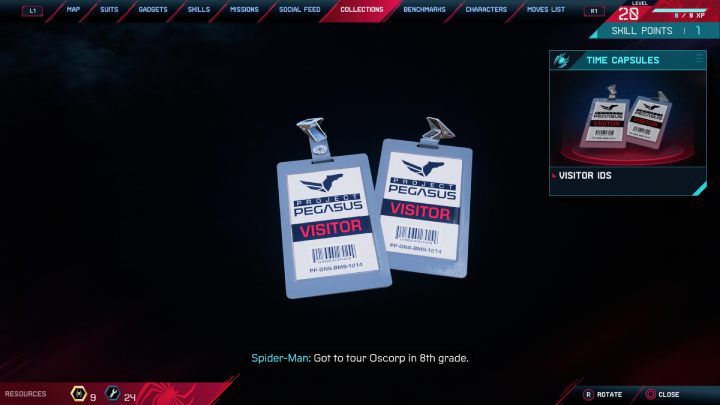 One of the capsules contains 2 tags from Miles' 8th-grade visit to a S.H.I.E.L.D research facility called Project Pegasus. 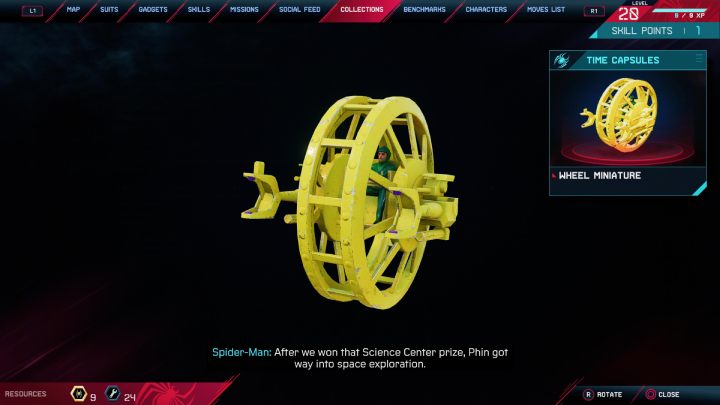 In the next capsule, you will find a miniature wheel, with a green man in the center. This is a reference to Jackson Weele, a corrupt businessman who constructed a similar device equipped with a variety of weapons in 1978's The Amazing Spider-Man #183. 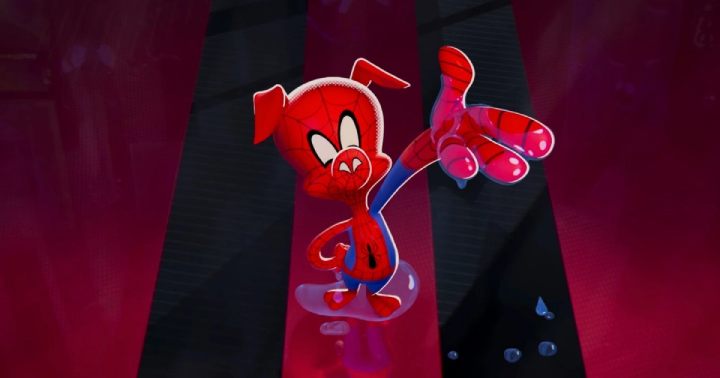 In one of his podcasts, J. Jonah Jameson mentions Spider-Woman, Spider-Punk, and Spider-Pig. This is, of course, a reference to the pig character from the 2018 animated film "Into the Spider-Verse." 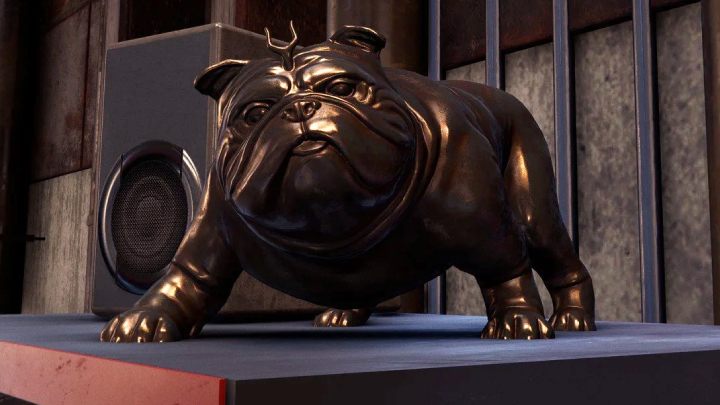 The bulldog statue can be found in one of the Underground's hideouts. In the first part of the game, a statue of immense size stood on Wall Street in place of the traditional bull.

Lockjaw was a large dog belonging to the Inhumans, a race of superhumans living on the moon. The dog served as a transport for the royal family and had the ability to teleport. 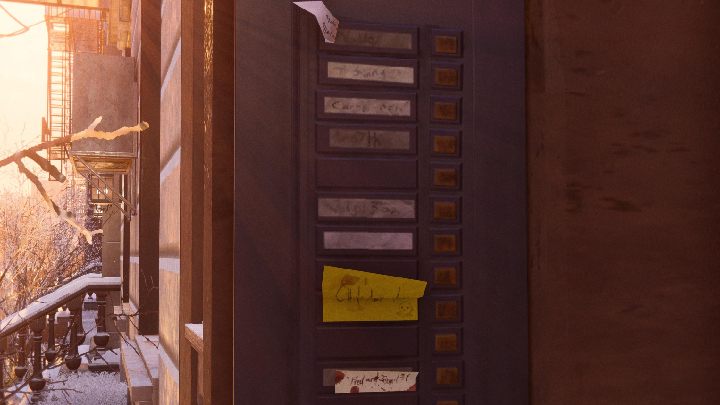 If you go back outside Miles' block and enter photo mode, take a closer look at the names on the intercom. It turns out that the same building is inhabited by, among others, Waldo, known in Europe by the name of Wally, the hero of the books under the title "Where's Wally". Below are the names Woody and Buzz, known from the animated film titled "Toy Story", Cthulhu along with a small illustration depicting the monster created by H.P. Lovecraft and Freddy and Jason, two icons of horror cinema. 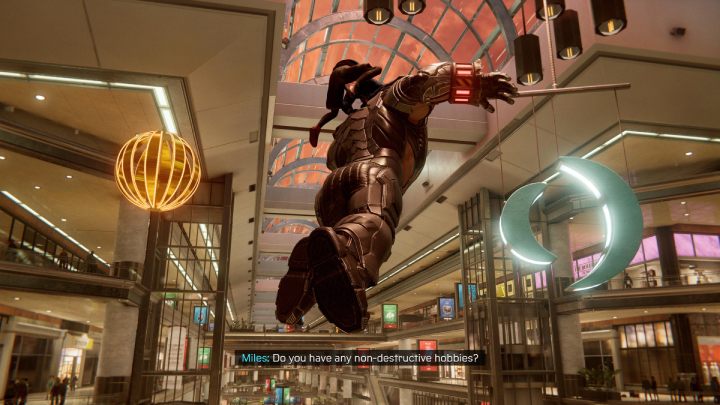 In one of the main missions, when Miles is chasing Rhino around the mall, the Insomniac Games logo hangs from the ceiling as a light installation. In the previous game, the studio's logo could be found on their headquarters building. 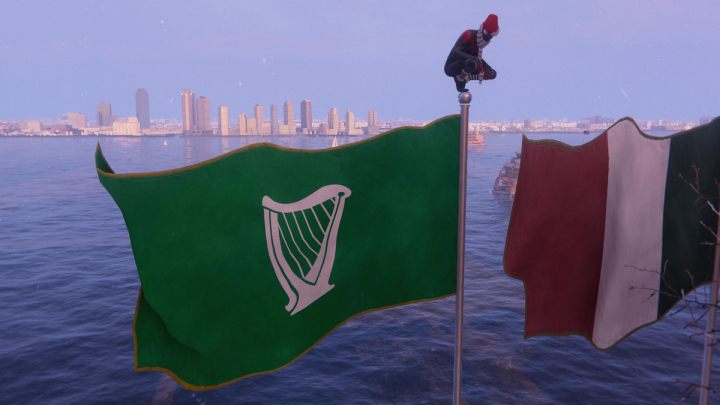 In the Midtown area, in front of the embassy building, if you look closely, you can see the strange appearance of the Irish flag. Instead of three colors, it features a harp on a green background. It resembles the flag of Confederate Ireland from the 17th century. A similar Easter Egg could be seen during the scene after the credits in the movie Black Panther, where the flag of Wales flies as an independent country. 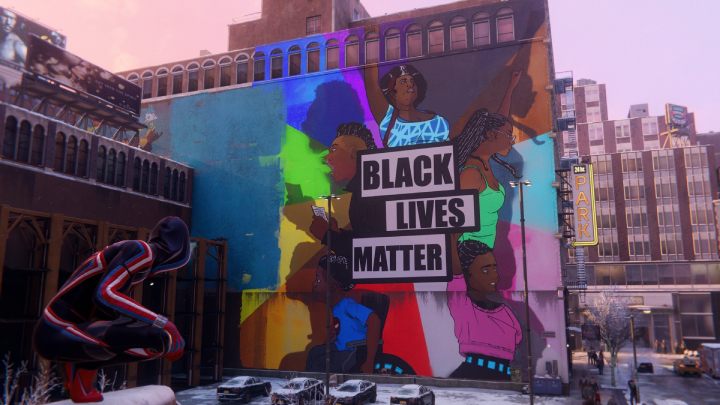 After completing all activities from the FNSM app, Miles will receive a gift from city residents. He will then go to the designated location, under a mural that reads "Black Lives Matter" in the financial district. The Black Lives Matter movement started as early as 2013 gained worldwide prominence in 2020 with the spread of riots and protests following George Floyd's death. Given Miles' African-American background, this could not be omitted from the game. 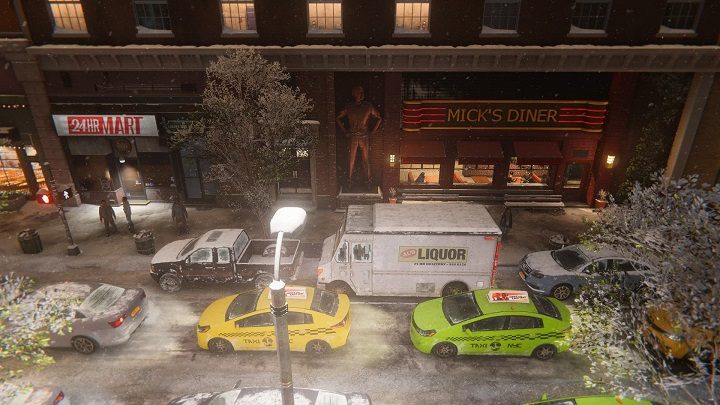 On the Upper West Side, you'll come across a statue of Stan Lee between the market and Mick's Diner. It was in this establishment, in the first part of the game in 2018, Peter and Mary Jane ran into Stan Lee, working there as a cook. 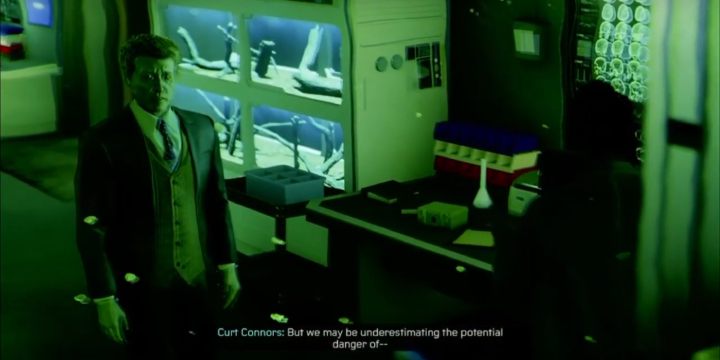 After completing the game's main storyline and watching the end credits (which will take up to 15 minutes), as is customary with Marvel, we're treated to a final scene, foreshadowing the sequel.

The scene, seen from the eyes of a man inside a vat of green liquid, depicts a conversation between Norman Osborn and scientist Curt Connors, who becomes the Lizard in almost every Spider-Man story. So it's easy to guess that the person in the tank is Norman's son Harry Osborn, a friend of Peter Parker's who is suffering from a secret, deadly disease.

The lab broadcasts news stories about events taking place after the completion of the Spider-Man Miles Morales game. The Harlem district is still being rebuilt after the devastation caused by the Underground's conflict with the Roxxon Corporation, and Rio Morales wins election to the city council.

Norman demands of Connors that Harry finally be released. Despite Curt's warnings of potential danger, the scene most likely ends with young Osborn being disconnected from the apparatus.

Spider-Man fans are certainly familiar with the story of the Osborn family. Norman Osborn in the pages of the comic during an experiment becomes the Green Goblin, a creature that terrorizes New York City. The monster is eventually defeated by Peter. Soon after, Harry becomes the new Green Goblin and tries to avenge his father.

However, in the scene after the credits, Harry appears to have black tentacles that are perhaps intentionally meant to evoke the character of Venom. So who will we fight in the new version of the game from Insomniac Games? Will Curt Connors start prowling around Manhattan after transforming into the Lizard? Will we have to defeat the Green Goblin? What exactly will Harry turn into?