This page of the Spider-Man Miles Morales manual contains a description of all crimes in the FNSM application.

You get the FNSM app during the 6th main mission - Harlem Trains Out of Service. To check the list of 11 crimes swipe your finger on the touchpad left and press R1 to go to the appropriate tab. Choose one of the available tasks and go to the designated place. You can also press R3 and check if there is a crime in your area. The screen will then display a sign with a red exclamation mark under which the distance from the event will be marked.

For each crime foiled, you will receive 150 experience points and 1 activity token. You can receive additional XP and chips by performing bonus tasks. 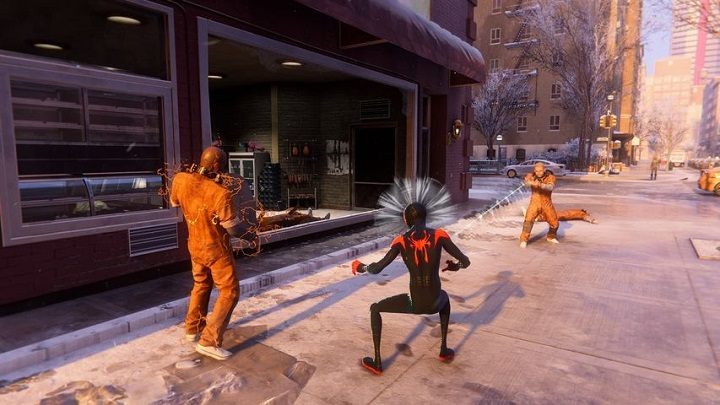 Pretend to rob the "Little Apple" store in downtown Harlem. 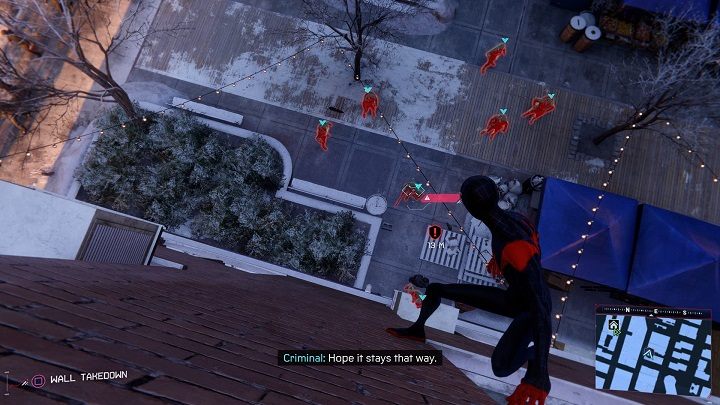 Go to Harlem. Near Miles' apartment, a group of thieves is trying to break into the building. Beat all opponents. 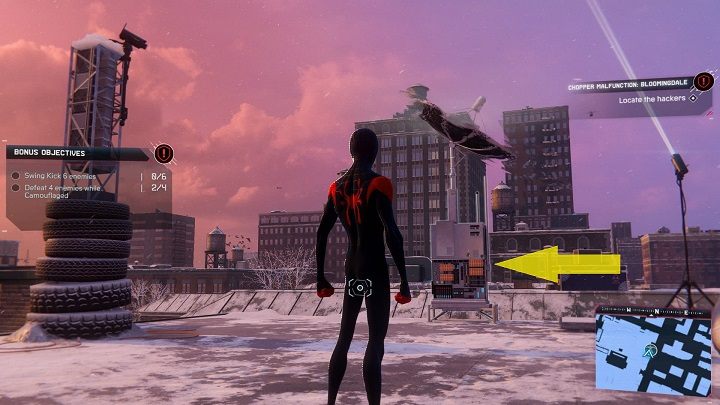 Head to a designated area on the border of Harlem and the Upper West Side. A helicopter attacked by a gang of hackers will fly between the skyscrapers. Your job is to locate 3 smaller groups of Underground members on nearby roofs and turn off 3 transmitters. 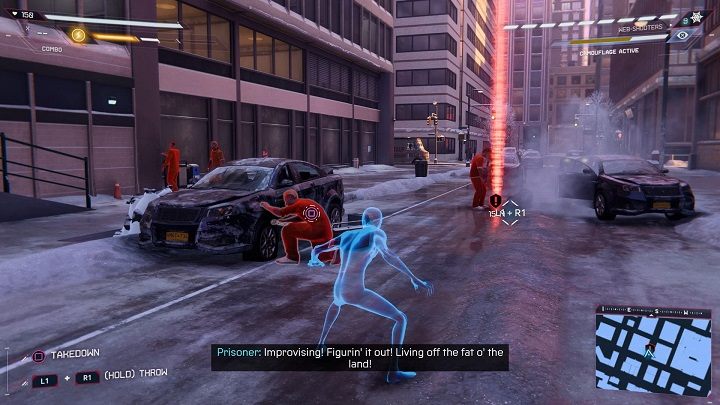 Go to the Upper West Side. Near the Underground's hideout, a group of fugitives attacked the passers-by. Beat them all using camouflage or in open combat. If one of the bandits steals a nearby car, you will have to thwart the escape. Follow him and when you get close enough to the car, press the triangle to jump on the car roof. Press the square to hit the thief when he leans out the window, then stop the vehicle. 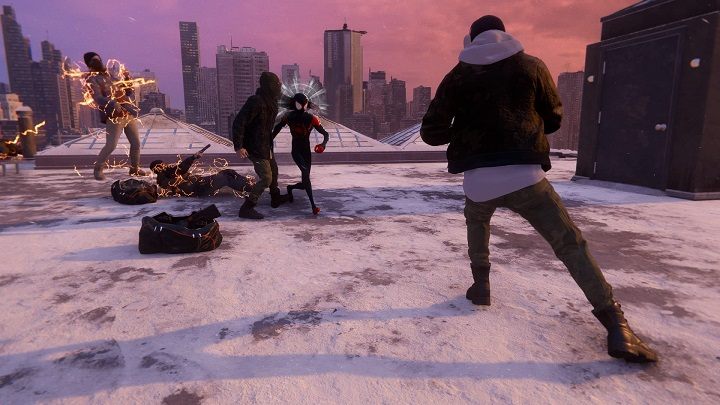 Go to the roof of the building in the northwestern part of the Upper East Side. Defeat all gang members to thwart their gun smuggling. 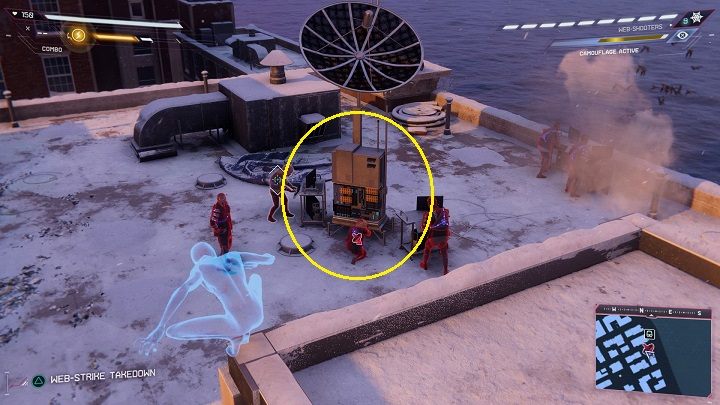 Go to the Upper East Side, near the park. Hop on the billboard that displays the Underground logo and walk up to the box. Hold the triangle pressed until you can track the transmitter. Follow the radar to the roof of a nearby building, defeat all enemies and destroy the transmitter. 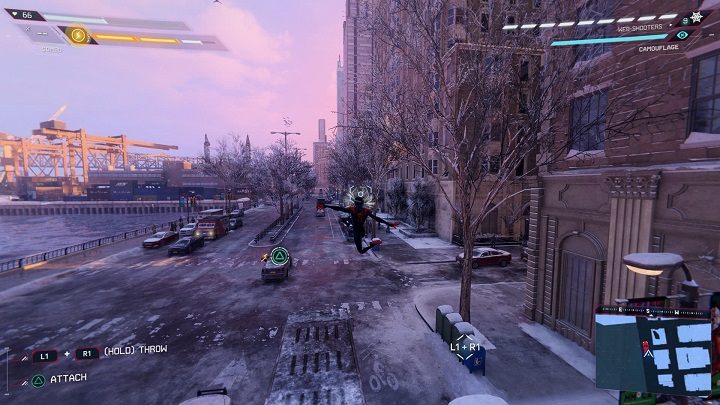 Go to a designated place on the Upper East Side. The stolen car is headed for Midtown. Approach the speeding car and press the triangle when it appears on the screen to jump on its roof. As soon as one of the thieves leans out of the window, press the square to overpower him. Beat all enemies and stop the car. 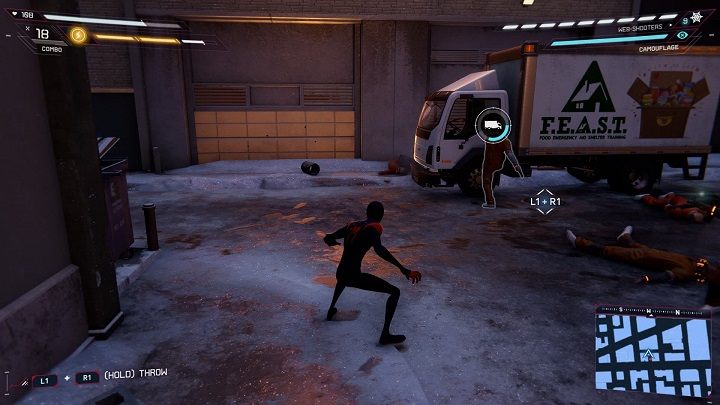 In downtown Midtown, thieves are trying to steal a F.E.A.S.T. truck. Go to the designated place and defeat all enemies. When a small icon with a truck appears on the screen, it means that one of the thieves is trying to kidnap it. Quickly return to the vehicle and incapacitate the enemy. Beat everyone to complete the task. 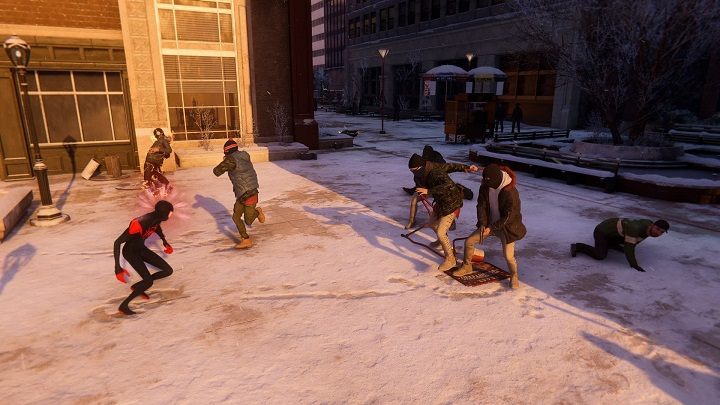 In Midtown, go to a designated location and defeat a gang of thieves who are trying to rob a man. 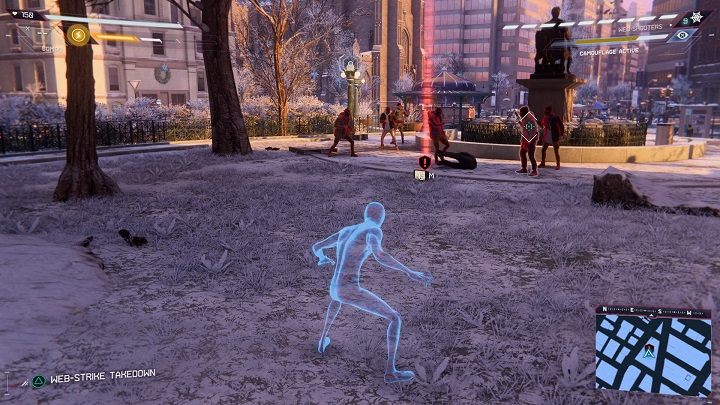 In Greenwich, help the attacked man. Beat all gang members. 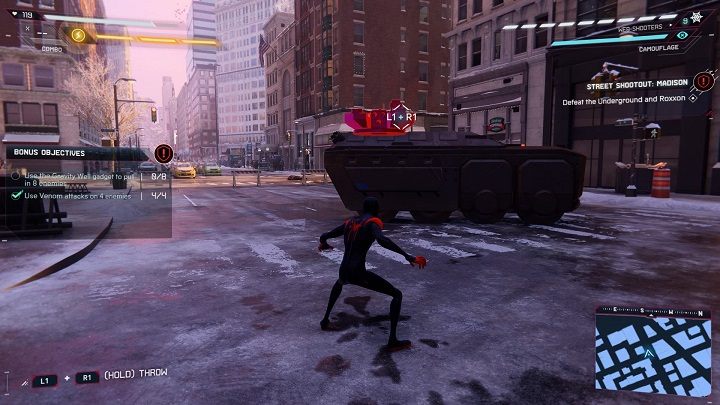 Beat all participants in the Midtown shooting. Finally, approach the tank and press L1 R1 to pull the weapon from the vehicle roof.