The following page of the Spider-Man Miles Morales guide describes the walkthrough of all activities in the FNSM app. After completing 9 activities, the Thank u, Spider-Man! will be unlocked, in which you will get the Uptown Pride Suit .

You get the FNSM app during the 6th main mission - Harlem Trains Out of Service. These activities are short tasks that the people of Manhattan ask you to complete. To see the list of available activities swipe your finger to the left on the touchpad, select one of the tasks and go to the designated place. 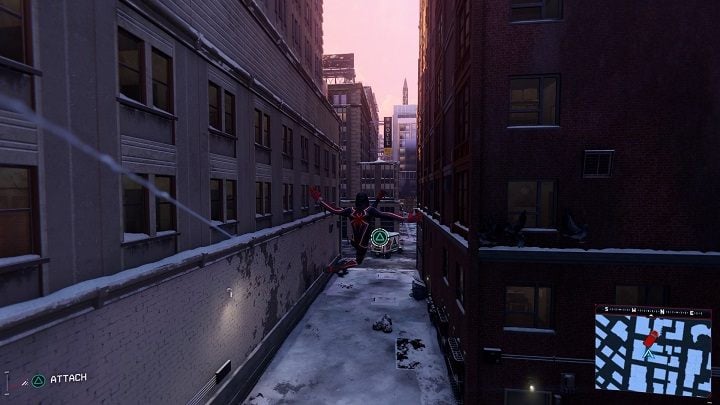 Talk to a man standing by a F.E.A.S.T. truck stuck in the snow. Go to the designated place in front of the vehicle and press L1 R1 to grab its front with the web, then keep pressing the square and pull it out of the snow. The driver will thank you and drive away. Miles will notice a list of addresses on the ground. Take the list and follow the truck. When you get close enough to it, press the triangle to jump on the roof and then the square to hand over the list. 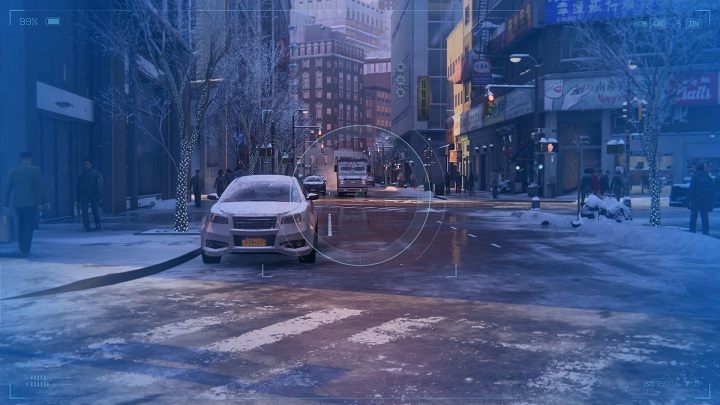 Talk to Sam in the designated area. He will ask you for help in locating the fake F.E.A.S.T. truck. Aim (hold) L2 and press R1 to take a picture of license plates. There are three F.E.A.S.T. trucks on the nearby streets, Miles will have to locate the fake one. Each truck has its own looped route. Stand in the street, wait for it to pass by and quickly take a picture of the license plates. When Ganke finds out which of the trucks is a fake, jump on its roof by pressing the triangle. 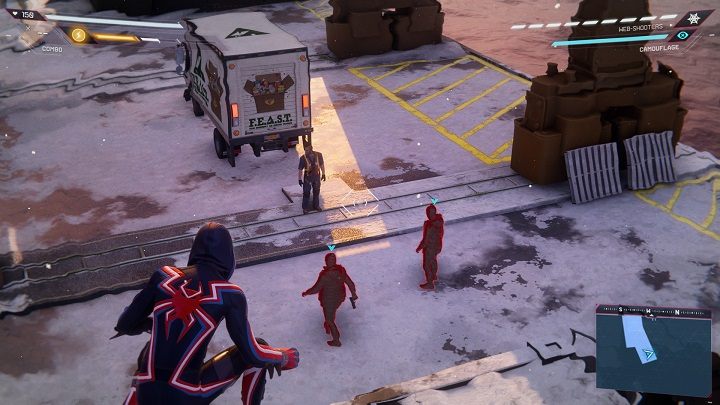 You will reach the docks in Midtown. There you will have to find a man named Joe. To do this, put on a camouflage, walk up to the next person and take a photo of his face. After you find Joe, follow him. After a while the thieves will arrive. Defeat them all and look in the truck. A gang member will jump on you from inside the truck. Also, more opponents will come inside another car. Defeat everyone to complete the task. 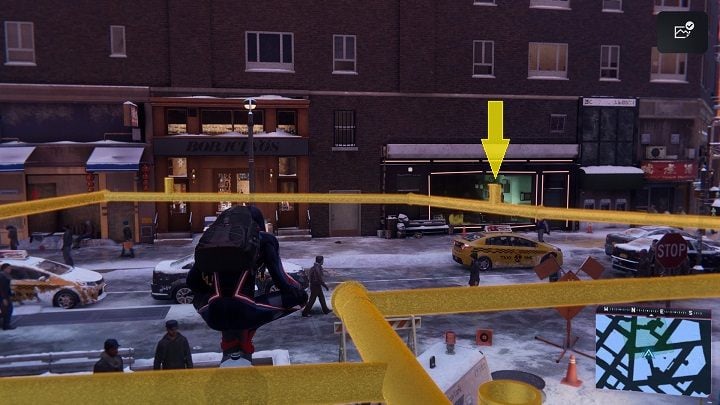 After selecting this task from the app, go to the financial district and talk to the guy in the red checkered shirt. He will ask you to find his cat Vector, give you a backpack and his favorite pet toy. Your spider senses will catch a trail. Follow the marked path on the screen. Crawl between school buses and examine a dead rat. Follow the new trail and investigate the entrance to the sewer. Scan the environment (R3), Vector went out through the manhole shaft on the right. Go there and investigate the area. Follow the new trail on the roof of a nearby building until you come across the cat's collar. Another track will lead you to Vector. After finding the cat, take it to its owner.

Can I get a photo? 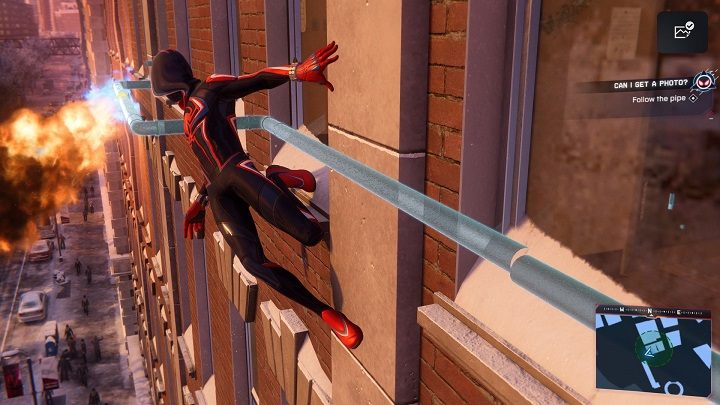 Talk to a girl on a terrace near the park in the financial district. After taking a photo, there will be an explosion in a nearby building. Jump into the building and extinguish the places from where the fire is coming out. Aim (L2) and seal the cracked tubes (R1) when the crosshair turns green. Scan the surroundings (R3) and follow the pipe along the walls of the building to seal all cracks. 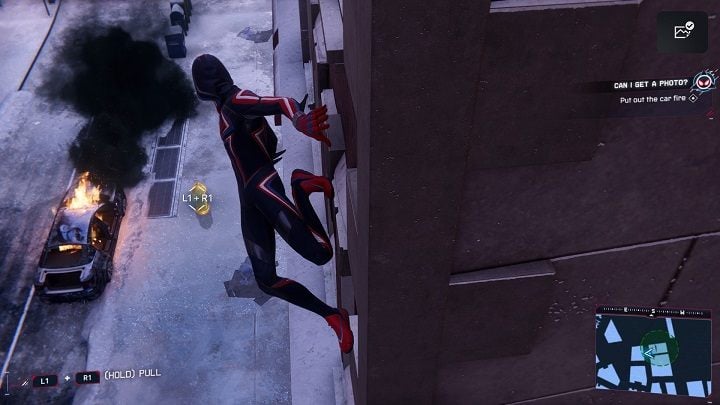 The last explosion will cause a fire in a nearby car. Press L1 R1 to jerk the hydrant, then quickly press the square to extinguish the car and complete the task. 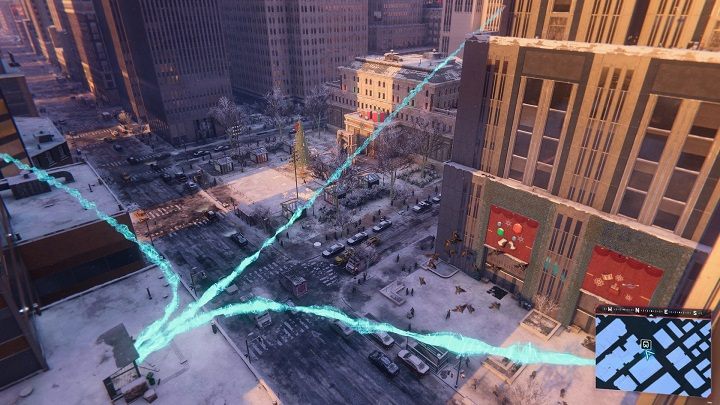 Once you've accepted the mission, talk to Howard on the roof of a building in Midtown. He will ask you to find his 3 pigeons. Follow the trail until you find a cage on a nearby roof. There will be 3 tracks leading from here. Following the one on the right, will let you find the cops on the roof. When you talk to them, a pigeon will fly over - chase and catch it as soon as L1 R1 appears on the screen. The middle track will lead you to the pigeon with a note. Follow the trail on the left to reach several bandits talking on the roof, defeat them and pick up the photo. Read the message on its back. Follow the marker on the map to the Daily Bugle building and defeat all thieves to complete the task. 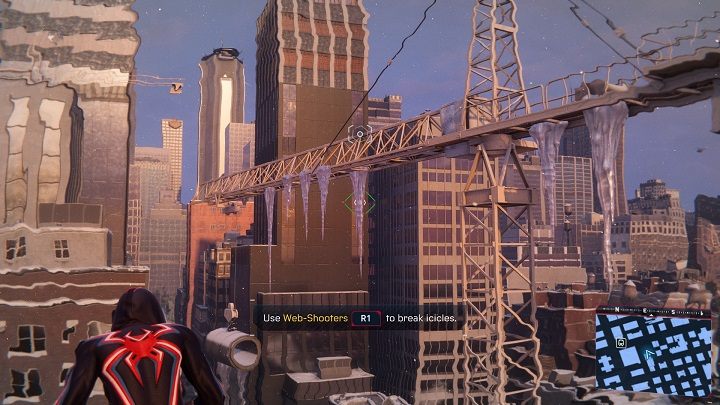 In this short task you have to talk to a worker on the roof next to the crane. He will ask for help to remove the ice on the machine. Aim (L2) and smash the icicles (R1) with a web launcher. If you shoot at the icicles further away and you do not smash them, it means that you must approach them closer. Do not forget to remove the icing from the pipe connected to the crane. After removing all icicles, jump on the water tank and move the crane (L1 R1). The pipe will fall into the tracks, jump down quickly and hit the pipe by pressing the square until it breaks. Then jump off the tracks with a cross.

Stuck on a skyscraper! . 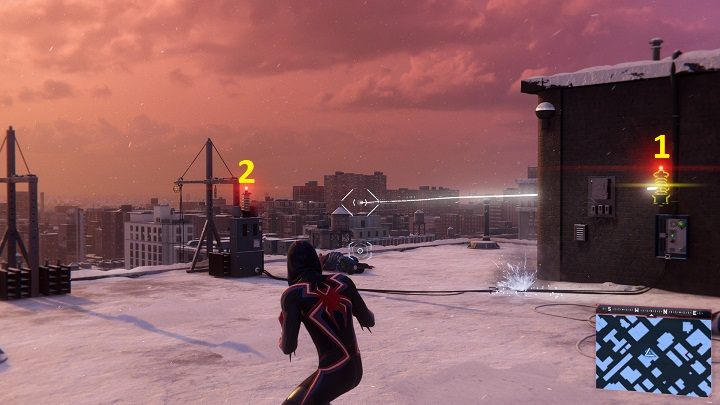 After accepting the task, go to the designated place and talk to the worker who is stuck on the platform. He will ask you for help to restore power. Jump on the roof and deal with thieves. Press and hold L2 to aim and fire (R1) the web launcher and connect the bar on the wall (1) to the bar at the end of the roof (2). Then check the fuses (the box under the bar on the wall). Scan the environment and follow the wires to the generator, use a venom blast (L1 square) to turn it on. Return to the fuses and restore power by completing the task. 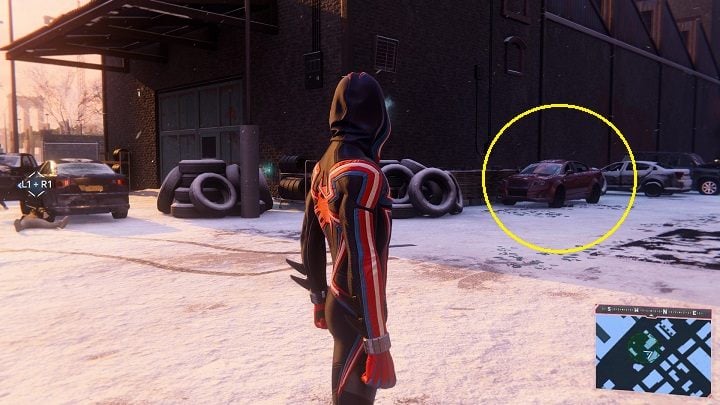 After selecting the task from the app, talk to a man at the hospital in the Upper East Side. He will ask you to find his stolen car and give you the keys. Follow the radar until you reach the docks in Harlem. Eliminate a large group of thieves, then press L3 to honk and find the car. 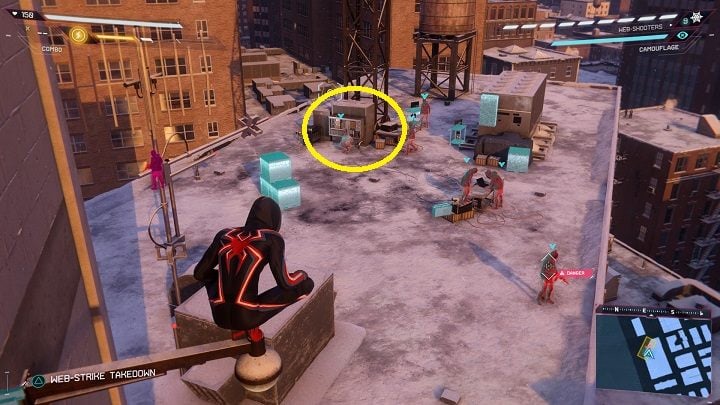 Talk to a paramedic at the burning building. He will ask you to find the source of signal interference. The radar will indicate the direction of interference. On the roof of the building you will find a group of criminals. Defeat them and turn off the generator (L1 square). The radar will show you the next generator to turn off, guarded by another group of enemies. Once the signal is restored, go back to the burning building and talk to the rescuer again to complete the task. 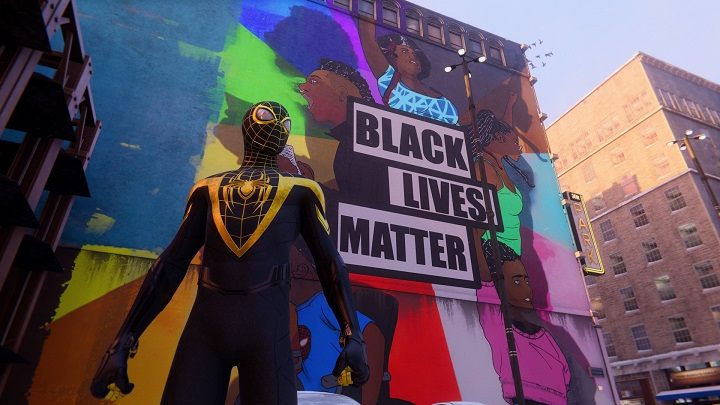 After completing all the activities in the FNSM application, grateful citizens will leave a gift for you under a mural in the financial district.