On this guide page, you will find a list of all trophies (achievements) available in Spider-Man Miles Morales. You will learn what the requirements for each achievement are, how to unlock all 50 trophies and how to win platinum.

Get "Spectacular" or better in a Spider-Training traversal challenge.

There are 3 levels to achieve in this challenge. "Spectacular" is the second highest score you can get. The easiest way to get this trophy is in Challenge 1.0.

Get "Spectacular" or better in Spider-Training combat challenge.

This trophy is the easiest to get through completing the Challenge 1.0.

Get "Spectacular" or better in a Spider-Training stealth challenge.

The easiest way to unlock this trophy is to finish Challenge 1.0.

Complete every Spider-Training challenge at least once.

Complete all 9 challenges. They are divided into 3 types: Traversal, Combat and Stealth. You will earn the trophy no matter what rank you score in these challenges. All challenges are automatically marked on the map at the beginning of the game.

After completing the "Spider-Training: Complete" challenge, the "Final Test" mission will be unlocked. After you finish it, you will get the trophy along with the new "Miles Morales 2020 Suit".

You can craft 16 upgrades in the game in total. They can be found under the "Upgrades" tab. To craft them, you will need tokens and other items acquired while doing various activities during the game.

Ride Rhino through the mall.

Hanging By A Thread

Keep the bridge together.

The Core of the Problem

Get the trains running again.

Chase Tinkerer through the city.

Walk through Miles and Phin's past.

Crawl on the ceiling until you are above your enemy, then press the square to finish them. Eliminate 25 enemies using stealth takedown.

Climb on the wall and press the square to finish off the nearby enemy. Eliminate 25 enemies with a stealth takedown.

The camouflage will be unlocked as the main storyline progresses. To use it press the arrow up, but remember that it only works for a short time. Defeat 50 enemies wearing camouflage. You don't have to perform a stealth takedown. Eliminating enemies in a regular fight will also count towards the trophy.

Venom attacks are unlocked as the plot progresses. Each Venom attack costs one fully charged Venom bar, displayed in the upper left corner of the screen.

Venom attacks have different combinations. You can set a shortcut for two such attacks and assign them to the left or right arrow, thus making these attacks more easily accessible.

Perform a Venom Jump, then a Venom Dash on a single enemy.

Venom Jump and Venom Dash will be unlocked as the story progresses.

Use the Venom Jump first (L1 cross) and then, while still in the air, use the Venom Dash (L1 triangle) to knock out your enemy.

Use Venom Dash to throw an enemy into a group of three or more.

When you are about to fight a bigger group of enemies, run into one of them using the Venom Dash (L1 triangle). This will push the enemy away and make him crash into others standing next to him.

Smash into 15 breakable objects while steering Rhino through the shopping mall.

During the first mission, ride on Rhino's back and steer him into 15 brittle objects such as tables or windows. You can do this mission again after selecting it in the menu, if you fail to break 15 things on your first try.

During one of the final missions, "Like Real Scientists", Miles will experience a flashback. On the left side of the second room (after you see the aquarium), you will find a mini-game that you can play with Phin. To win, press the square as many times as possible. Don't worry if you don't succeed right away. You can play the mini-game again.

Pay your respects to a legend in the Upper West Side.

In the Upper West Side, between a store and Mick's Diner, there is a Stan Lee Statue. Approach it and press the triangle. When you are near the monument, you can press R3 to locate it. You will find the exact location below. 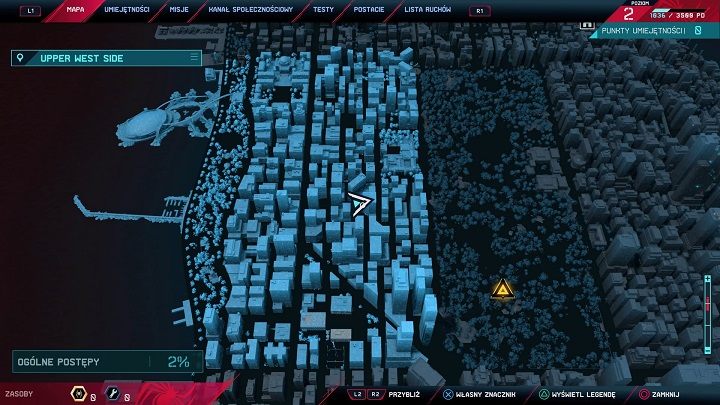 JJJ Would Be Proud

Apply a sticker and customize lighting while in Photo Mode.

Press the OPTIONS button to enter the Photo Mode. There, you can change the lighting or use stickers.

Defeat 50 enemies with Remote Mine gadget.

As you progress through the game, you will unlock the Remote Mine gadget. Hold down R1 to open the menu and select the mine. Aim with L2 and throw it with R1.

You will find 10 side missions in the FNSM app. They will become available as the plot progresses. You will receive tokens as the reward for completing these missions. To accept and start a side mission, swipe left on the touchpad. You will find completed tasks from each district on the world map.

You can find the suit upgrades in the "Suits" tab.

You can find the Visor upgrades in the "Suits" tab.

Go to the cemetery in the northern part of Harlem and press R3 to scan the area. The tombstone of Miles' father will be marked with an orange outline. Jefferson Davis' grave is located in the north-eastern corner of the cemetery. Press triangle to interact. If the interaction does not work, walk away from the grave or leave the cemetery for a few moments and come back again. 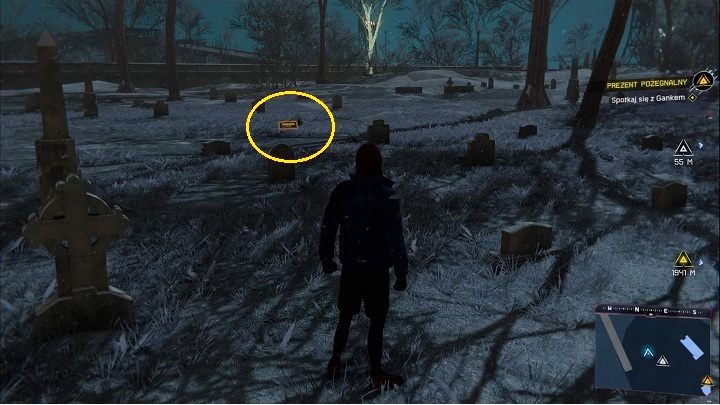 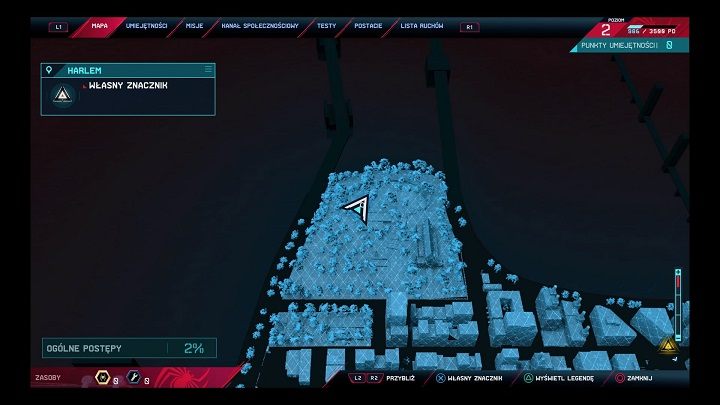 A Gift From Pete

Complete all Bonus Objectives for every crime type.

During the game you may come across 10 different crime types. Every one of them includes 2 Bonus Objectives, which will be displayed in the upper left corner when you press R3 at the beginning of the action.

Stealth takedowns are performed by pressing the square while hanging from the ceiling or when in camouflage.

At the docks in Chinatown (in the southern part of the neighborhood) there is an old boat near the bridge. You simply need to jump on it and ride it for a while, and the trophy will be yours. You will also find one of the capsules to collect on the boat. 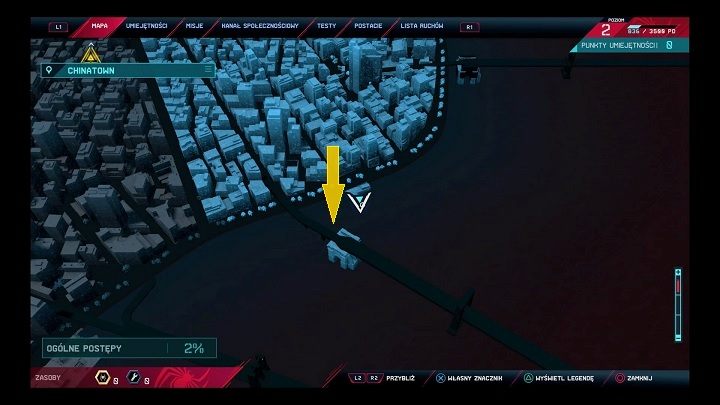 Scroll through the entire Social Feed at the end of the story.

Scroll through all the messages in the Social Feed tab after completing the main storyline.

Complete the game on New Game+

After completing the main storyline, return to the game menu and select New Game+. You will keep everything you unlocked during your first playthrough.

You can find 16 Time Capsules in the city, which are marked on the map as you advance in the main storyline. For the exact location of each capsule, see Secrets, Collectibles, Side Activities.

Postcards will be unlocked only after the whole storyline has been completed. Once you have completed your main missions, go to Miles' house in Harlem to unlock your new quest and find 8 postcards scattered around the city. Each found postcard will contain a clue regarding the location of the next one. For more information, see Secrets, Collectibles, Side Activities.

There are 35 caches in the whole city. Some contain new suits or mods. Caches will be marked on the map as you progress in the game. When you approach the cache, a blue searchable area will appear. Press R3 to find the cache more easily. You will find 6 Underground Caches in 3 Roxxon Labs and 3 Underground Hideouts. Before a fight, you can choose an alternative path that will lead you to the cache. If you can't find it, you can leave the building and enter it again. You can leave the mission after opening the cache.

Shut down all Roxxon Labs.

As the game progresses, the locations of 3 labs will be unlocked. Clear them to get the trophy.

Shut down all Underground Hideouts.

The locations of the 3 Underground Hideouts will be unlocked along with your progress in the game. Defeat all enemies inside the Hideouts to get the trophy.

There are 19 suits available in the game. Some of them will be available through side missions, while the rest you can craft yourself, once you get the required materials and tokens. The last suit will be unlocked when you start New Game+. For more detailed information, see the Suits and Mods section.

Come at the King

Unravel a criminal conspiracy in Harlem.

First, complete all side missions in Harlem to unlock the last quest related to this neighborhood. After unlocking this achievement you will get the Winter Suit.

Complete an Enemy Base without being detected.

Complete one of the Roxxon Labs or Underground Hideouts while successfully avoiding detection. This trophy is the easiest to get either in one of the labs or after lowering the difficulty level. Crawl up the ceiling and use stealth takedowns or camouflage to remain undetected.

To unlock this achievement, you need to perform 100 consecutive strikes in one fight. The combo counter is in the upper left corner. The timer will reset if you take any damage or if too much time passes between your attacks. If you set an easier difficulty level, the combo counter will not reset when enemies hit you. Go to one of the labs or the Underground Hideouts - you will find the most opponents there.

Collect all Sound Samples and recreate the Davis Brothers Mix.

There are 10 sound samples to collect. They will be marked on the map along with your progress in the game's storyline. When you get to the marked location, you will have to find the right sample among many different sounds. For a detailed description of the location of each sound sample, see Secrets, Collectibles, Side Activities.

To get this trophy, you have to unlock all 33 skills. You will receive 24 of them gradually as you level your character. The last skill in each skill tree is only available in New Game+. You will unlock levels from 20 to 30 at the start of New Game+. You will be able to purchase the last skill only after you reach level 23. In addition, to unlock 9 skills you need to complete tests in the Spider-Man training.

Complete all activities available in the game. They will be marked on the map. This trophy can be unlocked only after completing the main storyline. To get it, you have to find all the collectibles, complete the tests in the Spider-Man training, do all side missions, find all 35 Underground Caches, clear 3 Roxxon Labs and 3 Undeground Hideouts.