On this page of the guide you will find a set of starter tips for Spider-Man Miles Morales. We have prepared various tips for beginner players. 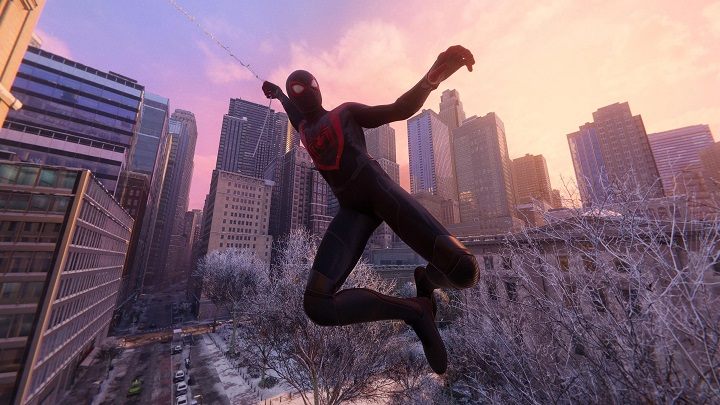 If this is your first approach to Spider-Man, take some time to learn how to move. Swinging on the web may not be easy for a beginner player. Learn how to let go of the web at the right moment and shoot a new one to swing from other buildings. Every now and then try to jump onto the highest objects in front of you, such as chimneys and skyscraper roofs, to get to the required destinations at high speed.

Spend some time in the Spider-Man trainings at the beginning of the game. You can find them in the tests tab in the main menu. Thanks to completing the tests, you will unlock useful skills, which will allow you to deal with your opponents more easily. It is also a good idea to focus on the main questline right away. This way you will get access to the side quests and gain experience points which will allow you to max out the game faster.

Try to do bonus objectives during each main and side mission, such as "Web 3 enemies to a wall" or "Achieve a 10x combo". For each completed bonus objective you will receive tokens, which are necessary to buy suits and mods.

During your first mission your character unlocks a Venom Punch. Use it as often as you can. Miles doesn't have as many gadgets as Pete, but his Venom Skills will certainly be useful, not only in combat. As the game progresses, you will learn the Venom Jump and Venom Dash. Use different Venom Skills combinations during combat to attack multiple enemies at once. Develop these skills in the skill tree.

Camouflage will also be unlocked early in the game and is useful in many situations. It allows you to escape the fight for a while if it overwhelms you, or to suddenly attack the enemy. You can also sneak up on an enemy who holds a shield and take it from them to make them an easier target. You can activate the camouflage even in the middle of a fight to confuse your enemy. Stealth killing is a good idea. Crawl on the ceilings and walls, and attack opponents without being noticed.

Throw whatever you can

Don't forget to use objects in your environment during combat. Such objects will be marked with "L1 R1". You can throw them at enemies or knock over elements of building structures.

Get rid of snipers and more demanding enemies first. They can be bothersome when you fight a large group of enemies because they might disrupt your combos. Remember that when up in the air, you have the advantage and the possibility to perform special attacks. Use different combinations of spider skills to create your own fighting style. Frequent dodges, jumps and sprints will allow you to minimize the damage you receive.

If the fight overwhelms you, use the camouflage to move away or escape for a while. This will give you a moment to rest and heal yourself easily using the arrow down button. If you find that the combat is too demanding for you, remember that you can change the difficulty level at any time.

Scan everything and everywhere!

Scan your surroundings often for e.g. tokens or items necessary to modify suits and gadgets. Scanning reveals hidden objects and characters you can interact with. Invest in upgrading your Visor as soon as possible, so you can e.g. track your enemies' actions even if they are behind a wall.

When searching the Underground hideouts or laboratories, don't forget to find secret caches. They contain some really useful things. If you leave the scouted location without finding the cache, you will have to do this task again.

Wave to your fans

Press the square to interact with the people of New York. If you pass by a person who will have the circle over their head, you will be able to, e.g. give them a high five.