During this mission you will once again return to the orkish territories, where you will have to aid Gor in repelling the attacks on his lands. While the mission may appear to be hard, there is a simple way to finish it. At the beginning of the map you will meet with a Firewielder scout - after talking to him go to their encampment in the north, where you will have to prepare for battle.

After reaching the camp you will have to talk to the three orkish leaders - Xarr, Urash and Elder Zilrach. You have to pass on the orders concerning the upcoming battle to each of them. Here, it is best to tell Xarr to expand the borders - which will grant you a total of five sectors from the very beginning. After talking to all leaders, return to Gor. You will now encounter the enemy commander - Kagan. After you finish the dialogue with him, the forces of the Purity will attack - do not engage them. Gather your heroes and units and escape to your camp - the enemy will not do much when it comes to pursuing you. 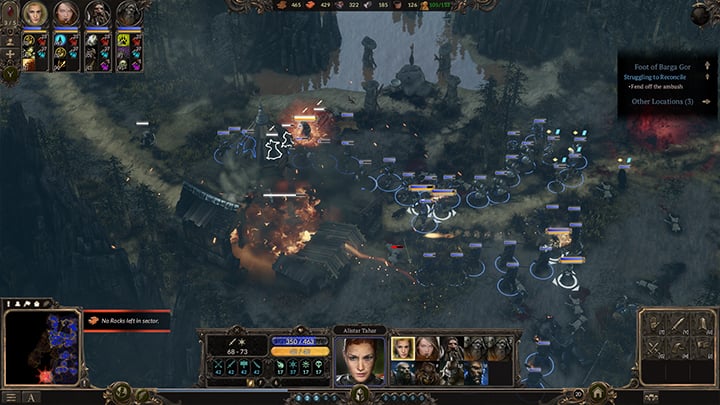 If you escape from the ambush you will be able to gather your strength without issues and then assault the hostile base.

You now have the time to expand your base and gather your forces - both Kagan and the Purity should not attack you. When your armies are ready set out to the main base of the Purity, which is located in the southern region of the map. However, you should choose the long way around to this location, keep following the eastern edge of the map. Destroy their main encampment - this will result in victory over the force which previously meant to ambush you. Now return to your base - you will receive the mini side quest Reinforcements - you will have to talk to new chieftains, who will arrive in your camp, thanks to that you will be granted additional units.

Now talk to Gor - he will tell you that it is possible to convince Kagan to form an alliance with your forces, on the condition that you defeat the Purity. Since you have already done that, the only thing left is to meet with Kagan. You can calmly head towards his camp - his armies will not attack you. During the conversation Gor will try to commit suicide, but do nothing to stop him - this attempt will not be successful. After talking to Kagan go to the representative of the Ashreavers, and then back to your camp. After another cutscene, the mission will come to an end.