You must go back on the desert and seek Iron Falcons' help. Taking Undergast with you is a good idea. Your first objective is to find the Falcons - head to their old camp located in the south. You will come across a mage in trouble. Save him and speak with the man. He informs you about the current situation in the canyon and asks you to help him with his expedition. This starts a side quest - In The Name of Knowledge. However, you should first go to the old Falcons' camp and speak with the soldiers.

Defeat the Deathmen and the Bane 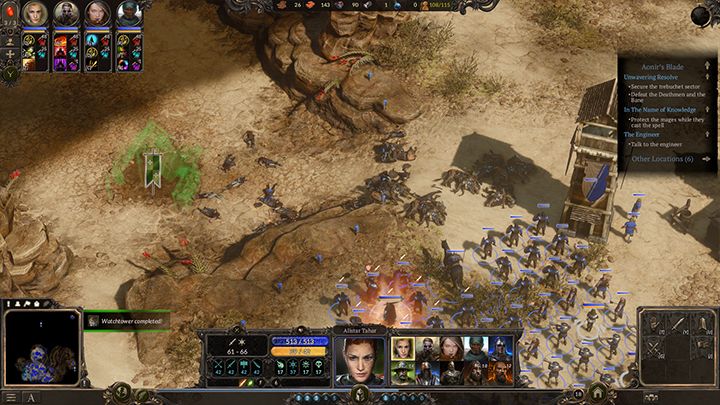 This mission only seems to be difficult.

You now have access to a camp and a group of soldiers. At first, your situation may seem dire because you don't have access to iron. Capture the sector located next to your camp. Defend your terrains by using soldiers and defense towers. In the meantime, you should develop both sectors (remember to use farms to get food) and add recruits and looters to your army.

Gather more forces and head north. Capture two more sectors (and another one, located north-west from your main sector). By doing that you can extract iron so use it to strengthen your army. Again, stop with expansion for a moment, place defense towers and get more troops. Then, attack the camp located north-east from your position. Fill it with defense towers. You can also send three workers to the mine. The enemy's main sector is located north from here (don't try to destroy it because the mission will get bugged).

Enemy forces are in defense which means that you can capture the rest of the map (remember to place defense towers in all sectors that have exits from the main enemy camp) and complete the side quests - In The Name of Knowledge and Playing with Fire. 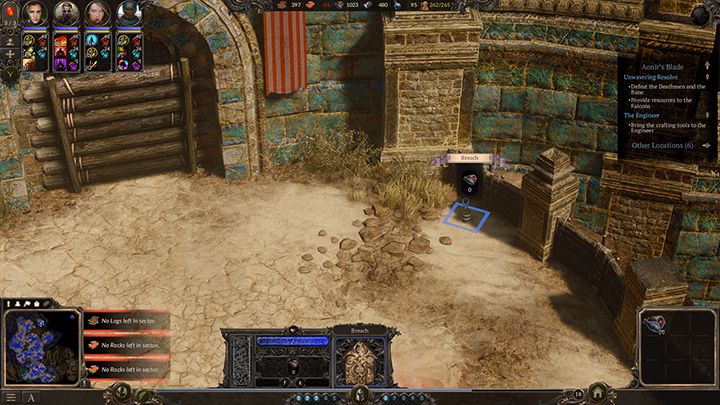 The place where you have to deliver resources can be easily missed.

The last thing that you should do is to capture the sector located in the north part of the map - the place where the Falcons' trebuchet is. While you are there, you can complete a minor side quest called The Engineer but your main goal is to deliver resources to the Falcons. Select the small barrel located near the wall and click on the option that lets you to send resources. You need to send a few resource bags to fill the bar. This opens the back entrance to the stronghold. You can now speak with High-Keeper Arenor. Now, you have to defeat all remaining enemies and capture the enemy's main camp. Complete this objective and speak with Arenor once again - this completes the quest.

In The Name of Knowledge - side quest 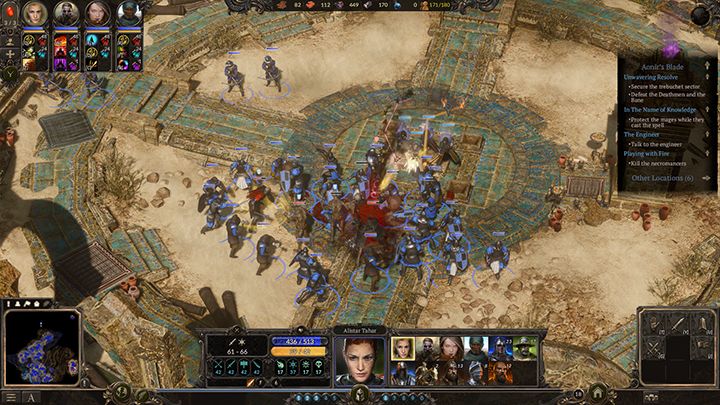 Defending the mentalists with your army is easy.

After saving the mage, the one you met at the beginning of the level, you have to reach the place where the Bane had their camp during your last visit in this location. There, you can meet Leyna and a group of mentalists. She asks you to defend them during a ritual. Visit the ritual's sight, located in the east part of the map. However, you should do that in the later part of the mission when you gather a large army and have your base secured. Speak with Leyna again to start the ritual. Thanks to the army you should have no problems with defending the mentalists. After that speak with their leader once again and finish the quest.

Playing with Fire - side quest

A small group of Falcons can be found west from your main sector. You learn that a group of necromancers, located south-west, want to summon undead. Defeat them and the Falcons will join you. You should do the same thing as you did in the quest described above - complete it after securing the entire map. With strong army, you shouldn't have any problems with defeating the necromancers.