After passing through the portal in Everlight you will reach the Unknown Island - the place where you can find the second nexus stone.

First you must find Whateley, so go through the path to the north. You will quickly find him and one of the locals - they will be surrounded by a group of medusas. Defeat them - they are quite strong, but this group shouldn't be very threatening to your heroes. Then go with a local inhabitant to his village. 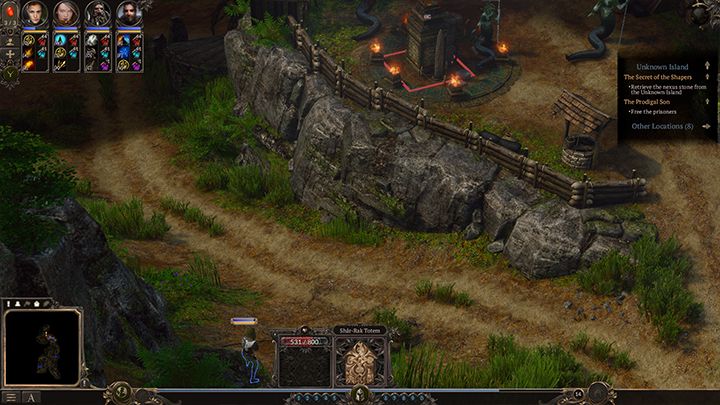 To free the locals you must destroy the Totem - it summons more medusas.

Here you will have to speak with Jaaras - the leader of the locals. She will task you with stopping her rebel son who controls the medusas you encountered. Before you start actions against the rebel son, first you must save some of the kidnapped villagers. Go to the north of the map - you will find the medusas' camp and the kidnapped people. If you're playing on higher difficulty level, then your characters will probably not be able to defeat the medusas in direct combat - the Totem Shar-Rak located nearby is regularly creating new enemy units. Because of that, you should first destroy it before going to direct combat. Use Yria - stand as her south from the camp, under the mountain. She should be in range to destroy the Totem with a bow and at the same time she shouldn't attract the enemies' attention. Only the additional squad created by the totem will attack her - when that happens, retreat her to the rest of the companions, defeat the medusas and go back to destroying the Totem.

Then defeat the remaining medusas and free the villagers. Speak with them and go back to Jaaras. She will send you to the village shaman - Vaalis the mage. 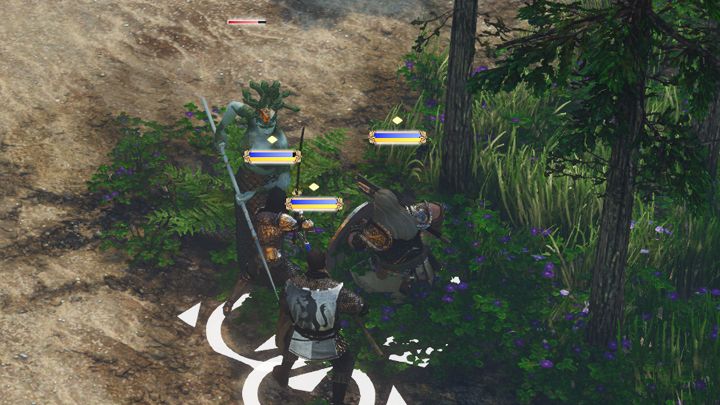 Before you start building the camp, first eliminate the enemies in the area - otherwise they will attack your units.

Now it's time for the second part of this mission. You must gather your forces and defeat the rebel son. At the same time you must provide resources to the village in order to keep the defense barrier active. Before you set up camp, explore the map as your heroes and defeat all enemies (except for the ones near the stronghold in the northeast). Thanks to that the monsters won't be interrupting you when you gather resources. You must also destroy all encountered Shar-Rak Totems. Watch out as there are some stronger monsters on the map - during the "cleaning" you should frequently save the game.

Then set the camp. Quickly take over the remaining four sectors and expand them. Don't recruit units yet - focus on delivering resources to the village. You can do it through the Transmutation Altar - you can order sending resources by selecting one of the three on the right side. At the quest list on the right side there will be time shown that tells you how much time is left until the barrier is deactivated. Each resource delivered changes the charge level of the altar, which means that it differently changes the time the barrier will hold. If you fully charge the altar (the charge level is presented at the bottom of the screen after you select it), the barrier will stop weakening and you won't have to deliver more resources. Iron charges it best, but it is better to send food as you have unlimited resources of it thanks to the farms. 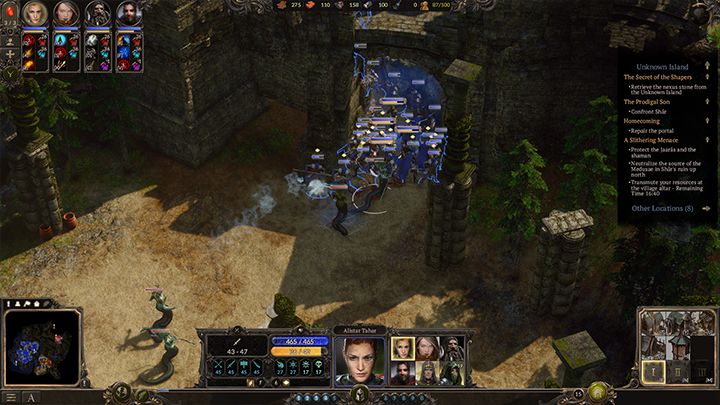 Once you have an army, the medusas won't be a difficult threat.

In the meantime you will be attacked by medusas from the side of the sector in the northeast. Their groups won't be large and you should be able to defeat them with your heroes. Despite that, you should still fortify yourself there with guard towers. Once the village defenses are strong enough and you have a large enough army, you can strike at the stronghold in the northeastern part of the map. With the whole army you should easily defeat the medusas. Once you reach the castle, remember to destroy two Totems - one is in the castle (it will be marked as mission objective) and another is behind the walls, east from the gate. Once you destroy them, new medusas will no longer appear. Now go back and defeat the army of medusas gathered at the border of the village (you can use menhirs to get there). Then go back to the castle, defeat the remaining enemies and speak to Shar who can be found in the back with his brother Duul. 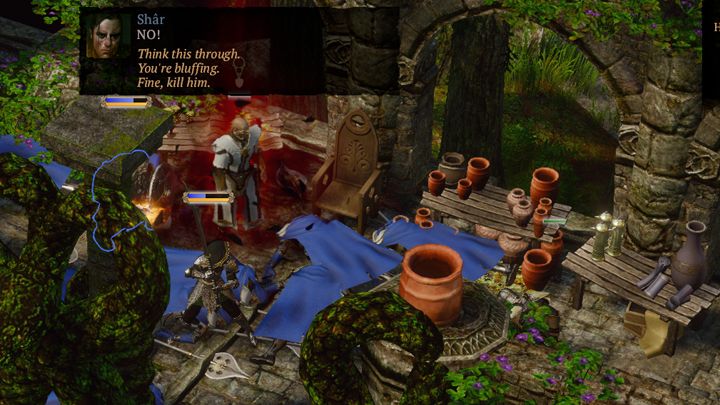 If you want Duul to survive, you must select correct answers in the conversation with his brother.

You should use all additional dialogue options during the conversation. Then, no matter what you say, a battle with him will start - remember to replenish your forces before it. It is a strong opponent who can use many spells, including one that can immobilize your whole army for a moment. If you use your entire forces, you should defeat him - just watch out for the state of your heroes' health. After being defeated, Shar will try to kill Duul. If you want to stop him, select the dialogue option "Think this through" and then "What about your mother?" Shar will let his brother live and he will disappear. Then you can go back to Jaaras. She will give you the nexus stone and the mission will end.

Finally, what's left for you is to repair the portal in the southwestern part of the island. With it you can return to Everlight. You must fix it by sending to it units with a required resource - in this case wood. To do it, you must obviously control the sector with the portal. You must also find crystals needed for activating it - they're near the ruins in the center of the map (the game will show you the precise location). Deliver it to Vaalis.

For the portal to be activated you must also deliver resources to the Portal Stone Altar. It can be found near the Transmutation Altar. As before, the type of delivered resource determines the charging speed of the altar. Then speak with Vaalis again (he will be eager to join you in Mulandir as an additional merchant). All that's left is to use the portal to return to Everlight and then to Mulandir.