Before you move to the actual next mission, you will have a short stop in Everlight. You must find Whateley - a man that was also looking for the island that is your next objective. Note: it is a good idea to have Yria in the party on the island, especially when playing on higher difficulties.

The path to the island 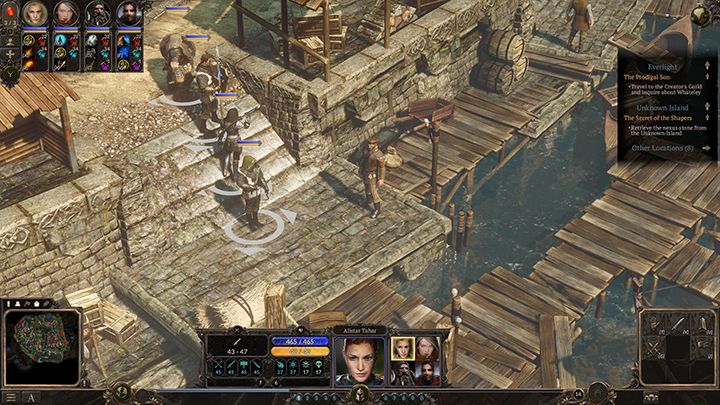 The carrier in the port will take you to the island where Creator's Guild is located.

First you must go to the Creator's Guild - it can be found on the island south from the city. To get there, you must go to the port and speak with the carrier. For a small fee he will take you to the next island (you must pay only once, the next time you can use a menhir to get there). Once you're on the island, go to the main island located there. Undergast the mage will speak to you once you enter - The World Within side quest is related to him. In order to continue the main plot you must speak with the mage marked by the game. 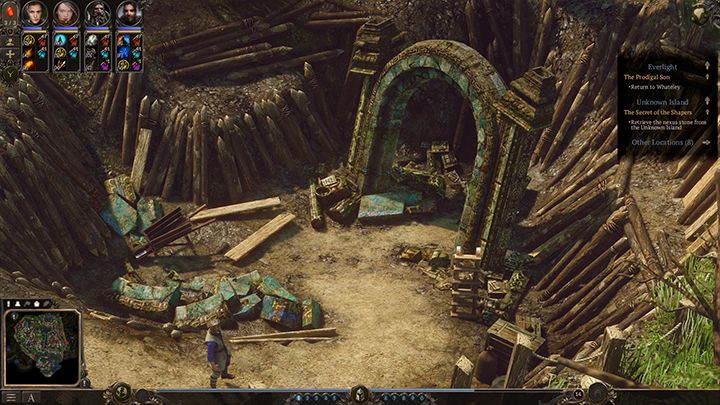 In order to move forward you must activate the portal.

The portal is located in the northwestern edge of the map. A strong group of bandits is located there, so prepare yourself for combat. After the battle you will discover that a stone is needed to activate the portal - Whateley had earlier thrown it on the beach. Finding it won't be hard - the game will mark its location. It can be found near the road you used to reach Everlight. Once you get it, go back to Whateley. Once you get close to him, the portal will activate and you will be able to go to the island you are looking for.

The World Within - side quest

When in the Creator's Guild, you will encounter Undergast the mage. If you tell him about your mission, he will be eager to join you if you help him with finding and examining a sentient golem. It can be found in the mine in the east of the map. 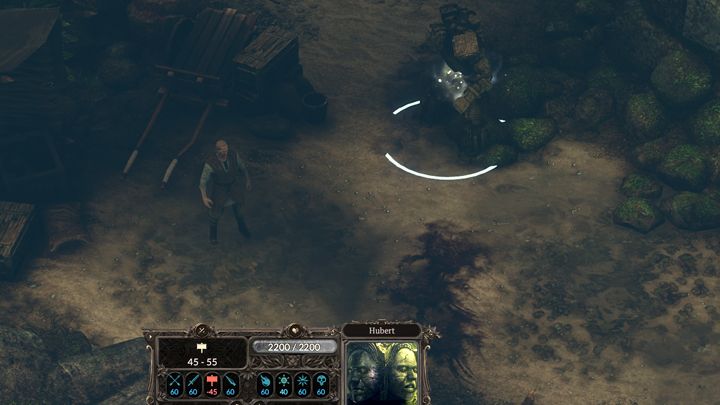 Here you will decide the fate of the golem.

During the journey through the cave you must protect the mage. Here you will find some undead enemies, but they shouldn't be very troublesome. The golem can be found in the western part of the map. Speak with him and his caretaker. Undergast will want to examine him and after the examination you will have to decide what will happen to the golem. You can take it to the Creator's Guild or you can kill it. Once the decision is made, go back to the Guild where Undergast will be waiting. Before you leave the mines, you can explore them - you will find some items there. There will be some enemies as well, mostly harmless ones like goblins. However, watch out, as you might also encounter much stronger hostiles (for example, a wyvern) that can defeat your party.

A Macabre Market - side quest

In order to start this quest you must pay the carrier in the port. He will take you to the southern part of the map. There you must go to the southwestern edge. There you will encounter a bandit camp. Defeat the enemies and save the imprisoned Orc named Qirr. He will inform you that Orc meat trade is blooming in Everlight.

First you must go near the mine in the east and obtain the evidence and Qirr's equipment from the bandits. The bandit group will be large, so try luring single opponents away instead of fighting all of them simultaneously. Once the fight is over, you can interrogate one of the bandits. He will tell you where you can find their main base. 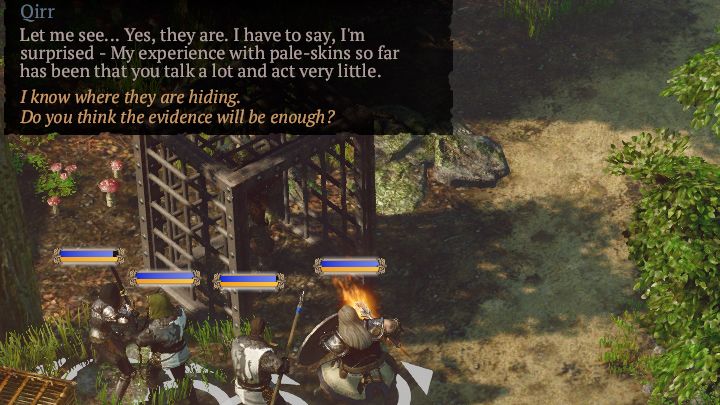 You can quickly finish this mission, but it is better to complete it thoroughly.

Now go back to Qirr. You can finish this quest by giving him the evidence. You can also ask him to attack the traders' base together. In order to do it, you must go to the slums where you will find Qirr.

He will want to pretend that he is your prisoner. For the deception to work you must tell the guards: "I'm here for the produce". Then walk inside and defeat the bandits. The fight shouldn't be hard. Once the mission is over, Qirr will ask you if he can join your army in Mulandir.