This is the last mission that allows you to find allies. You head to Foot of Barga Gor where you have to meet with Gor - a shapeshifting Orc. You met him before entering Mulandir.

Gor waits for you near the place where you appeared on the map - speak with him. You must both challenge the Orcs leader - Krell. Thanks to that you will be able to lead his tribe. Also, you have to dispatch one of your party members because Gor must accompany you. Meet with Krell. He orders his warriors to attack you - they aren't difficult to beat. Then, head north to one of the Orcs outposts and gather forces to face Krell. Here, you must defeat another Orc leader. 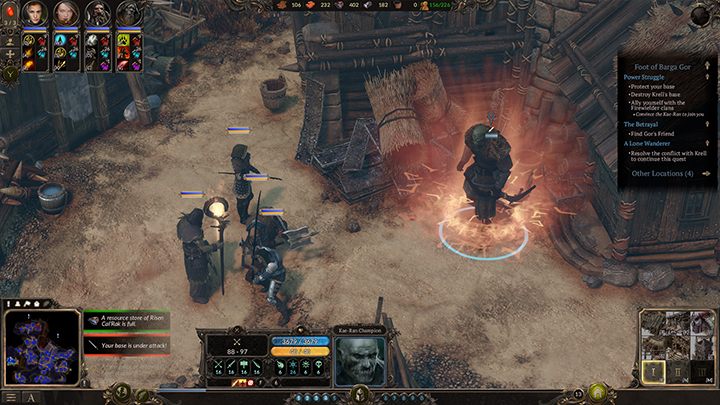 One of the leaders can help you, the rest should be decapitated.

You can now command an outpost and your goal is to defeat Krell. However, you don't have access to more powerful units - you have to unite four Orc clans, they are on this map. But before you do that, you should capture two sectors located south from yours and fortify them. Then, you can start capturing more sectors and convincing the clans to join you. Start with Zul clan, you can find them in the west. Defeat their leader and get access to Orcish Spearmen. After that you can visit two clans located north-west - Karr and Nok. Joining your forces with them gives you access to Orcish Fighters and Orcish Marauders. Kae'Ran clan is the last, they are in the south-west. This visit can end peacefully. Their leader asks you to bring him the head of the strongest leader - you can give him one of the heads of the previously killed leaders. Give him the head of Nok clan leader to complete this objective. Kae'Ran clan joins your forces and you can now recruit Orcish Hunters.

Note - as you may have probably noticed, you have one more side quest called The Betrayal. However, if you want to complete it, you can forget about joining forces with Kae'Ran clan peacefully. Gor's friend says that he can help you but you need to deliver him the head of Kae'Ran clan's leader.

Of course, Krell will keep attacking you throughout the entire time. However, you shouldn't have problems with defeating his forces. Defense towers alone won't be enough but they can give you enough time to maneuver your forces and defeat the attackers. Join all clans, gather as many units as you can and attack Krell's camp - this battle shouldn't be challenging. After that you have to face Krell himself - this duel will take place on the arena in the north part of the map. Although you can control only Gor, defeating your enemy won't be a problem. Krell's death ends this mission. You can now start another side quest called A Lone Wanderer that you got at the beginning of this mission.

A Lone Wanderer - Side quest 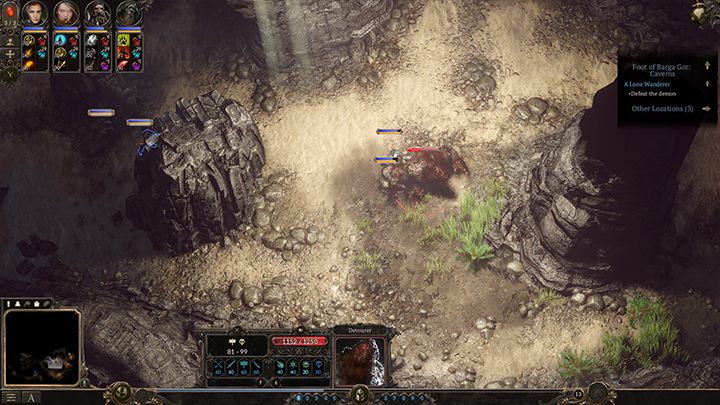 The raging demon can be quickly found in the caverns.

Note - this quest allows you to add another character to your party. You must head to the caverns in the south part of the map and examine them. You come across a man called Uram who fights with a demon. Help him. The demon is rather strong so be careful. However, you can defeat him by using all your heroes' abilities. After that you have to speak with Uram. This completes the mission. You can search the rest of the caverns - you can encounter a few groups of goblins and find some items.

In the south part of the map you can find an Orc blacksmith - Berghol the Bodacious. He asks you to get a fang of a best called Bone Gnawer. He needs it to forge a weapon. The best can be found in the west part of the map - near Kae'Ran camp. Despite the Orc's words, the best won't be difficult to kill. Take the fang and go back to the blacksmith. He forges a weapon for you and joins your camp in Mulandir.