You reach Iskander Wilds - this location appeared in the prologue. Fights still happen here. Your task is to ensure that the refugees reach their destination safely. Also, you have to find a medicine for one of the Farlorn's Hope villagers.

Secure the path for the villagers

Start with finding a medicine. You can get in the Purity Camp located in the north. After that you can go back to Clara. It turns out that you received a message from the Purity Camp leader. You have to meet with him. This launches a series of cut-scenes and after them you have to go to the camp located north-west. 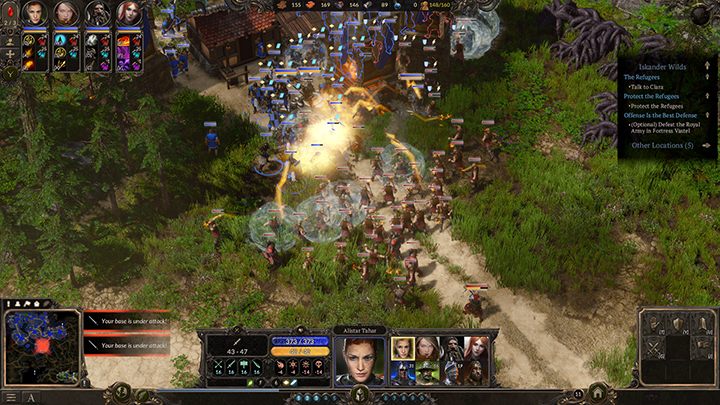 Fights with the royal army are difficult and time-consuming.

Speak with the Iskander general. He gives you his army. Your goal is to defeat the royal forces. This should allow you to secure a passage for the refugees. Initially, the mission may seem easy because you start with a rather large army which allows you to quickly capture nearby sectors. You can also upgrade your city hall to level 2 and get access to level 2 buildings. However, the enemy will flood you with their forces. Defeating them is difficult and it will take you some time. This means that you have to slowly move forward, capture and fortify new sectors. The enemy should stop a little bit with attacks after you capture the most important sectors that are marked on the map.

Here are a few tips for this mission:

Note - Before you speak to the general, you can go south and destroy buildings in the enemy sectors that are outside of the castle. There won't be anyone in those sectors, the only line of defense are the towers. It is possible that this can slow the enemy down. You should also kill all monsters before you start this stage of the mission.

After the battles you have to go to Clara and escort the refugees to another location.