Another mission that can help you find allies. Head to Farlorn's Hope to start it. 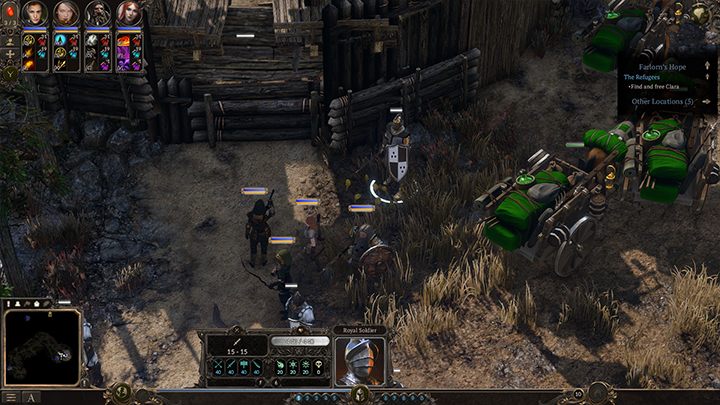 Royal soldiers are now in the village. Your first objective is to find and free Clara Farlorn. You can find her in the east, inside of a newly build prison. To initiate a fight with the guards you have to speak with the soldier who stands near the east prison gate. Tell him that you are looking for Clara. Defeat the soldiers, destroy the barricade and free Clara. She needs your help. You have to save villagers and prepare an escape route for them.

First, focus on rescuing militia - they can help you in later battles although they won't be that useful right now. Then, destroy the barricade in the east part of the village and defeat the soldiers in the old outpost. They shouldn't be a problem to you - your heroes will probably deal with them alone. After that you have to speak with one of the people pointed by the game in the village and tell them about Clara's plans. Take the villagers back to the village.

You have to escort them to the east end of the map. The royal army will attack you twice. However, defeating them with your heroes and militia forces won't be that difficult. Reach the destination and speak with Clara once again.