This is one of the missions that allows you to get allies. In order to start it you have to open the world map in the upper right corner and select Leafshade as your destination (this place is located in the north). Warning - enemies on that map are rather powerful so you should either lure single enemies out or avoid any fights.

Find the source of the corruption

Start the mission by searching for an Elven settlement. Follow the path that goes north and reach a road with multiple turns that leads to a bridge. Keep going until you come across a tipped statue - there, you can find an entrance to the Elven settlement. Inside, there are two Scryers, Finrior and Merelith, who are arguing with each other about the corruption that plagues the Elves. You can decide to help one of them. Regardless of whom you want to help, you have to learn what causes the corruption. 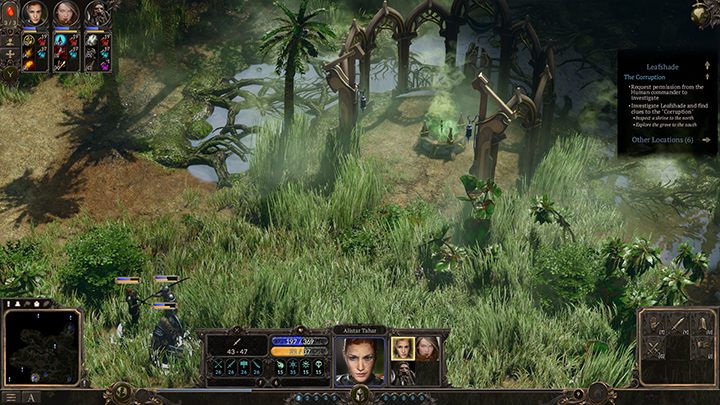 The source of the corruption.

Go to the shrine in the north. It turns out that its pool is corrupted. Then, head south and find tainted Treant. You now know the source of the corruption and that it also works on powerful creatures. However, you should still head to Humans' outpost located south-east. Tell the guard that the Elves send you and enter inside. Speak with their leader - Ferentus Cooper. He gives you a permission to move around Humans' territory. You also receive a quest - The Forsaken Coast (you have to complete it on a different map).

Upon leaving the camp one of the guards informs you that your friend, Bertrand Carpel, was here, in the outpost. He was looking for you. The man awaits you in the north part of the map. Go there but be careful. Instead of Bertrand you will find assassins. It also turns out that one of them, Ianna, will be on your side. Defeat the enemies and speak with the woman. She joins your party but if you want to travel with her, you will have to leave the map first.

Go back to the Scryer whom you decided to help and continue the mission. Note - if you want to complete The Forsaken Coast quest then you should do it now. Otherwise, you will fail it. Open the world map and head to The Green Coast. 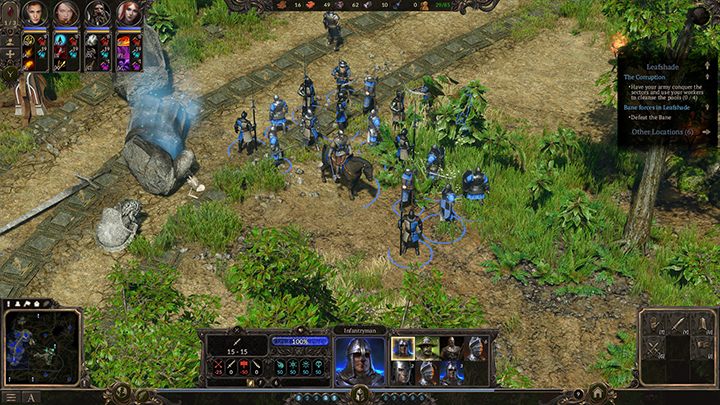 Completing The Forsaken Coast quest allows Copper to heal some of his men before the revolt.

You now have access to your own outpost and your goals is to make your territory big enough so it can reach all the pools. In the meantime, a rebellion happens in the Humans' outpost. That place is now ruled by the Bane. Commander Copper and his soldiers fall back to your positions and lets you order them. This gives you a few soldiers. You have two goals - purify the pools and defeat the Bane's forces.

Prepare yourself because the Bane's squads will soon attack. You should immediately capture the southern sector and start collecting food and wood there. Your main sector should be focused on collecting stone, iron and recruiting units. Remember that you now have access to level 2 city hall in the main sector so build it as soon as you can. Thanks to that you will be able to construct better buildings.

Increase your forces (think about recruiting Elven Wanderers because you already have Human units who fight at a close range) and start moving towards the Bane's outpost. Capture another sector and fortify it. Then, you have to capture yet another sector - this one is near the place where you were ambushed. Build a defense tower (you can now upgrade them). While they are defending your lands, you must capture the sector with the shrine in the north. Remember, pools can be purified by assigning workers to them. Also, you can't have any enemies around those places.

Charge the enemy outpost right after defending yourself from one of their attacks. You shouldn't have much problems with capturing it - watch out only for the enemy heroes. After that you can purify the rest of the pools.

Complete that objective and go back to the Scryers - you also have to purify the Treant that you have met before. You receive a special spell that allows you to help the creature. However, you have to weaken it first. This fight won't be difficult - the creature won't be able to deal with a such number of enemies. Weaken the Treant and cast the spell. Speak with it and go back to the Scryers. The mission ends after the conversation.