You have to reach Farlorn's Hope and find a Dwarf called Isgrimm.

Go to the village and find Clara Farlorn - she will tell you where to find your contact. Head south and find a goblins camp. Thanks to that you won't have to waste your time later.

Head to the village. Clara stands on top of the hill. You learn that the Dwarf was kidnapped by the Orcs who threaten the village. This means that you have to command the local militia and defeat the creatures. Go to Mart, you can find him in the eastern camp. But before you talk to him, you have to defeat a group of Orcs who have just attacked the village. Defeating them shouldn't be a problem to you. After that you can speak with Mart.

Before you start commanding your garrison, you have to prove your worth by destroying two small Orcs and goblins camps. The goblins camp is already destroyed so the only one left is the one that belongs to Orcs. You can find it east from Mart's camp. Defeat your enemies and go back to him. After that you have to talk with Clara again.

You can now command forces and you also get access to this outpost. Prepare yourself before you head out. Send workers to the logging cabin and build a hunting cabin. Also, you should go to the Orcs camp, the one that you destroyed, and capture that sector. There, you can find stone deposits. You don't have to build stoneworks - this building is already there. Develop your outpost to level two and build two towers - send two workers from the city hall to the second tower. 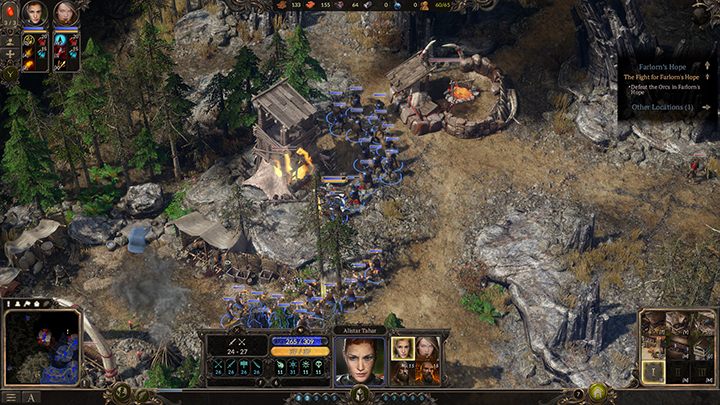 Orcs have more units but you can defeat them by capturing one sector after another.

Secure the area around you, recruit a few new units and head to the enemy. The best way to do that is to charge right after one of their attacks. Attacking the main outpost is useless at the moment - your soldiers won't be able to win. Instead, capture the smaller outpost located west from the main sector. After that you have to immediately build a defense tower - the enemy will try to attack you. Also, this outpost has a Godstone - similar to the one in your starting sector. You can use it to transport units from the main outpost right on the battlefield. Click on a Godstone and click on the option located in the bottom right corner to open a portal. Then, order your units to go through the portal located in the main outpost.

Create new units if you lost some of them during a battle and head to another smaller outpost located north-east from your positions. Prepare for regular enemy attacks - you are closer to their main outpost. Destroy their tower first - otherwise, it will shoot at your forces. Capture it and do the same thing that you did with other outposts - build a few towers. Also, don't forget to develop it.

Your last objective before attacking the main outpost is to attack the camp located north-east. This one is also fortified. Capture it, develop and construct defense buildings. Watch out, there are huge Orc forces located north from it. Also, this sector has food. You can now attack the enemy's main sector. However, you can also decide to capture one more outpost. This one is located farthest to the north.

The assault on the main outpost is difficult because of the Orc commander (he is marked as a mission objective). This enemy is very resistant and can deal a lot of damage. Try to lure him to a narrow path that leads to the outpost. Attack him with your units and order the heroes to stay behind and support the attackers with their abilities. The outpost gets destroyed after the commander's death. You can now find Isgrimm. Speak with him - the Dwarf joins your team. After that you have to go to Clara. You can do that by going through the Godstone located in the outpost.

Speak with her and then head north. There, you can find the entrance to Mulandir.

Holding a Grudge - Side quest 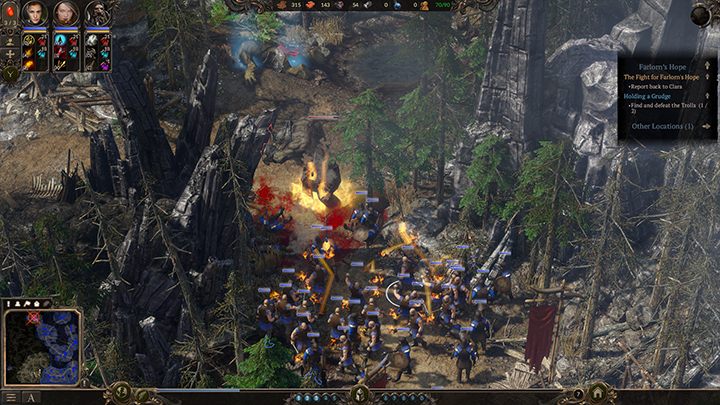 Killing the trolls won't be easy.

Go north from the starting place. There, you can find a Hermit. He asks you to find and kill trolls. There are two of them and the creatures are located near the north end of the map. They are strong so bring your forces from the main mission. Know that even if you have the maximum number of units that you can get after controlling all sectors, they will probably all die and kill only one of the trolls. This means that you have to create two full armies to take out both trolls. Send your heroes to the back and attack the enemies with ranged abilities. Kill one of the trolls and retreat so your heroes won't get killed by another enemy.

Kill both trolls, go back to the Hermit and collect your reward.

The Lost Trader - Side quest

A nervous trader stands near the Orcs outpost located farthest to the west. Orcs, that roam this land, make him fear for his life. If you already killed all Orcs in the location then you can simply tell him how to reach the village. If not then you have to defeat them first. Remember to destroy the Orcs barricade located south from the outpost. Go back to the trader and tell him how to reach the village. You can find him in Farlorn's Hope, he stands on the left from the place where Clara is. You learn that if you go back here later, you will be able to trade with him.