Your objective here is to examine a disease that plagues people of Liannon.

First, you have to reach Liannon village. You can find it in the east part of the map. Reach it by following the south end of the map - this allows you to examine these lands. You will come across animals, goblins and bandits - you should be able to deal with all of them without any problems. In this region you can also find a side quest - its description can be found at the end of this chapter. You should complete it now. Examine the south part of the map and head to your main objective.

An Elven outpost stands near the village. Speak with their leader. She won't allow you to enter the village. You have to retreat and create your own outpost.

Find a way to enter the village 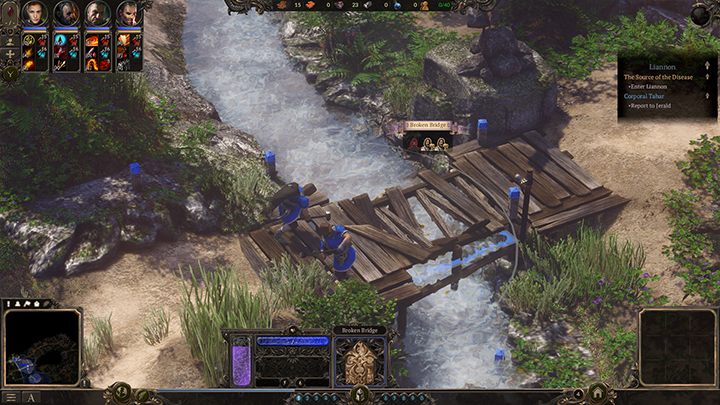 Fix the northern bridge as soon as possible - it will be useful later.

You have to gather forces and storm the Elven outpost. Speak with Jerald Seamark - he will give you further instructions. First, build a logging cabin and a hunting cabin. Also, there is a destroyed bridge in the north-west part of this sector - send your workers immediately and order them to repair it. In the meantime, send your heroes to kill nearby animals.

Your next goal is to create another outpost. The sector in the north is a good choice - it has stone deposits. Go back to Jerald - speak with him to unlock new buildings. Start mining stone and capture two sectors: one located south-west and another in north-east (the one closest to the Elven outpost). Build a logging cabin in the first one and towers in the second sector - soon, the Elves will assault that place. Three towers should be enough. Don't forget to build barracks.

You can also capture the eastern sector - it has farms that you can use. However, that place will also be attacked.

Develop your sectors and recruit more units. Capture the last outpost located in the north, beyond the river (watch out, there is a large bandits' camp located north-west from it). Don't forget to develop all your sectors - this allows you to increase your population limit. Gather enough forces and speak with Sentenza Noria. 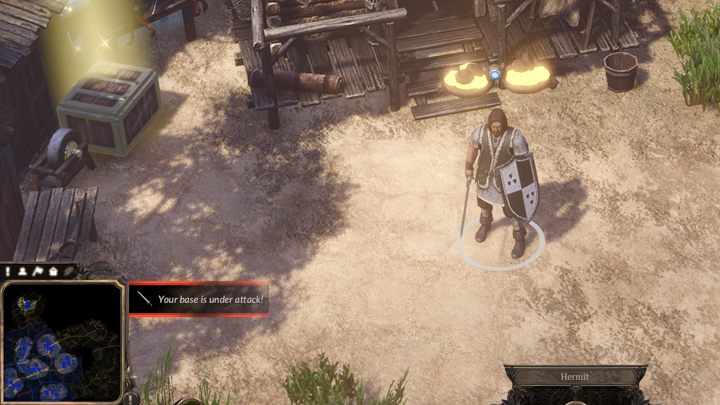 The hermit has a lot of useful information.

Head to the village in the north. Also, you can find a hut with a hermit (he is marked as a merchant) in the north-west part of the map. Speak with him. You learn that if you follow the path that leads east, you can find another entrance to Liannon. This one isn't as heavily guarded as the main entrance. Go there and remember to explore this part of the map - you can find a few useful items. Reach Liannon, break through the barricade that blocks the north gate and defeat the Elves.

The village is captured. However, you learn that your forces were attacked by Elves. Go back to your main outpost immediately - the old Elven outpost is gone which means that you can pass through this area safely. Focus your units on the enemy leader - he surrenders after sustaining enough damage. After that you can speak with him.

You now have to go back to Anselm - you can find him in the place where the old Elven outpost was. Speak with him and then prepare for a fight, it will happen regardless of your choices. Anselm is accompanied by other soldiers. Defeat him and watch a cut-scene.

Help the Refugees - Side quest 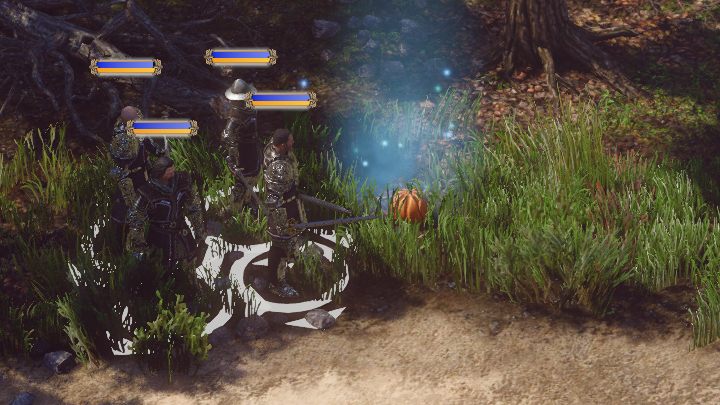 Finding the thief isn't difficult - just follow food that lies on the ground.

There is a refugee camp located in the south-east part of the map. Speak with Mother Calia. You learn that a man called Gilbert stole their supplies. She asks you to find the thief. This quest isn't difficult. There is a path, located east from the camp (marked in blue), that has food on the ground. Follow the tracks until you reach a small camp. There, you can find Gilbert. He will tell you his version of events. Regardless of your choices you have to go back to Calia and receive your reward.