The first campaign mission serves as a prologue. You play as Sentenza Noria, a commander of the Wolf Guard. Your goal is to crush the rebellion and defeat its leader - Isamo Tahara.

You control three heroes (Sentenza, Gwen and Anselm) and your first objective is to reach the outpost and gather forces. You can go there immediately but it is worth to head east and follow the stream - you can find a wolf and a bag with health and focus potions. Get the items and head to the outpost. Wolves will attack you again. A shield is near them, you can give it to Anselm.

There, you have to speak with Bertrand - right after that you will be attacked by a group of bandits. You can now control the soldiers who are in this outpost - try to use your heroes instead of the units and minimize losses by casting Restore spell which can be used by Gwen. 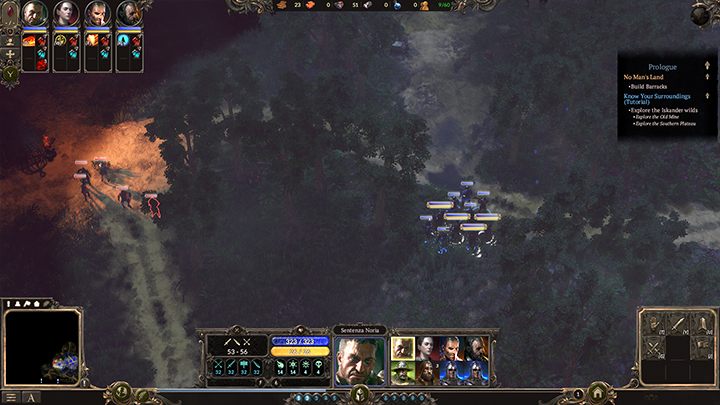 After that you have to increase your forces - send your workers to the logging cabin, the fishery and the hunting cabin. Gather enough resources and build barracks. In the meantime, you can walk to the blue markers (the game teaches you to check every corner on a map) - there, you can find additional resources and items. Warning, there is an enemy camp located west and south-west from your position. For now, stay away from them. You can go around that camp without problems. Collect everything that you can find and go back to your outpost.

Recruit new units. The game suggests you to get two squads of Looters and two Recruit squads - you should get twice as more. Then, speak with Bertrand.

Assault on the fortress 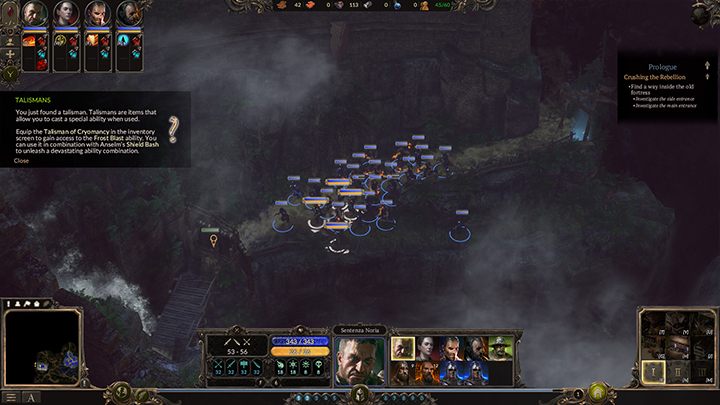 Head immediately to the side entrance when you get inside the fortress.

Your new objective is to capture an old fortress located on the hill in the west part of the map. You can encounter enemies while you are heading there but they won't be a threat to you. Remember to heal your units after each battle.

Two paths lead to the fortress - the main (its marker is a little bit to the west) and the side (its marker is a little bit to the east) gate. You can ignore the main gate - you won't be able to open it. This can save you time from fighting with its guards. Head to the side gate by following the path that goes along the walls. This gate is also locked but your units can destroy it without problems. Eliminate enemy forces inside the fortress. You have to defeat a lot of soldiers but don't worry - simply focus on defeating them systematically. After that you should look around the fortress and find, e.g. a new mace for Anselm.

Go into the caverns to continue the mission.

Here, you command only your heroes. You can activate Toggle follow camera ("L" key), this can be useful in sequences like this one.

Right after entering the caverns you get another tutorial mission called The Treasures of Eo. Its goal is similar to the one from the previous map - it encourages you to explore as much as possible. Examine all parts of the caverns. Most of the enemies here won't be a problem to you. The only exception to that are enemies near the blue marker farthest to the north. There, you can find a few rebel soldiers (including an elite unit, Man-At-Arms). A powerful undead will appear next to them. Lure them out with Bertrand (your archer) and defeat them when they are away from the undead. Then, you can deal with this enemy.

Your last enemy here is called Fire Golem. The creature guards passage to the main objective. This enemy is strong but you shouldn't have problems with killing it, just remember to use your heroes' abilities. Next, go inside and watch a cut-scene. After that the game moves you to character creator screen (that part is described in another chapter).