In Underhall you start with the party of your heroes and a small group of soldiers (tactics still the same). But later you are going to command the base, which must be expanded with many upgrades. You have to build a lot of defending towers and recruit a large army. Moreover, you will have the occasion to use mighty dwarven catapults. Take care of it, because enemy can easily destroy it. It would be great loss because catapults have great power and can destroy building and soldiers as well. You will also lead into the battle a group of powerful Ogres (but you can't recruit new ones). Take care of them - they are really battle machines. Do not lose them recklessly. The battle you are going to fight here is the biggest one you participated so far. 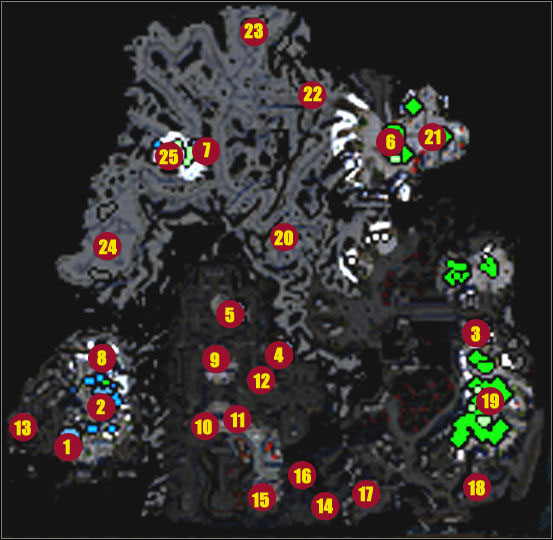 8. The Portal to the mine

20. The first line of defense

Quest solved: enter the mine

Quest solved (side quest): look for a small animal in the area

Quest solved (side quest): bring the snowcat to the sleeping guardian

Quest solved (side quest): save Lela

Quest solved: find and save Thane

Quest solved: fortify your base

The Sobering Up Potion: get a sobering up potion that will help Jandrim

In the Home of the Dwarves: revive the portal to Underhall and travel through it

Ruler of Underhall: rescue the ruler of the Dwarves

A Friend: talk again to the general Einar in Sevenkeeps

Utrecht: talk to your bailiff Utrecht in Westguard

Westguard: Utrecht's Wishes: build the Blacksmith, the Laboratory and the Altar of Life

Westguard: The Guard in the Westguard: recruit twenty soldiers and build five towers

Westguard: Construction of a Well: order Warrad to build a well and provide him with materials

The Dying Portals: give magic books to the Master Askan

Observation: unmask followers of the Cult in Sevenkeeps

Strange Chest: find a way to open a magic chest

Spidersilk: gather a few varieties of spidersilk for Odger

Monsters in the Quarry: clear the Quarry of Golems

The Right Twist - The Professor: help Professor to recover information about stonebreakers from Underhall

The Petrified Giant: use the Heart of Niethalf to revive petrified giants